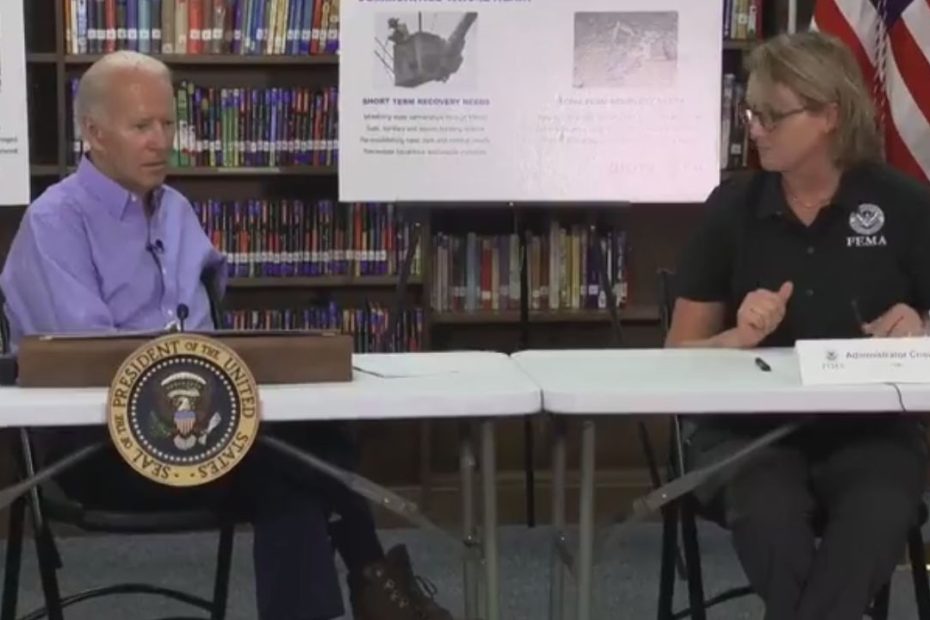 Joe Biden may be giving out a ‘cry for help.’ In a press conference on Monday, he gave a stunning revelation about the rules that appear to have been put in place for the president. Watch:

“May I say something? Bide asked.

“I still have to ask permission,” Biden said.

This is unusual behavior, particularly since the president tested Covid positive numerous times since July 21st and had only recently tested negative for two consecutive days and left isolation.

Biden nonetheless was coughing indoors next to Kentucky governor Beshear without wearing a mask.

Biden also did not wear a mask outside, once again indicating that the elites don’t take masking seriously, and neither should anybody else.

Biden’s admission that he is being instructed to seek permission to ask or take questions (or else he would be in ‘trouble’) is the latest in a long line of troubling statements indicating Biden is not in charge of his own presidency.

“You know, I know most families are focused on putting three meals on the table, taking care of their kids, and paying their bills,” Biden said. “Helping you do that is my job. That’s the president’s job as well.”

At the White House joint teleconference on the Inflation Reduction Act on Thursday, Biden mistakenly referred to himself as ‘vice president.’

“I did, I must admit total disclosure,” Biden said. “I’ve, I’ve spoken to the chairwoman about the possibility of my being able to buy one of those corvettes that are electric vehicles that, you know, when they come out.”

At the same joint teleconference, Biden asked for permission to ask a question.

“Thank you. Is it all right if I ask the question, Brian?” Biden said and laughed.

In September, Biden was cut off while trying to ask a question.

BIDEN: “Can I ask you a question?”

Also in September, Biden made an offhand comment that implied that he was not in charge of his presidency.

“Now, I am supposed to stop and walk out of the room here,” Biden said. “I am going to stop, and with your permission, I am going to walk into the room and say hello.”

In June 2021, Biden made a remark about ‘getting in trouble’ at a summit between the European Union and the United States.

"I'm going to get in trouble."

Biden confuses himself while reading notes at EU-US summit. This is just *embarrassing.* Watch:🔻 pic.twitter.com/Z0qoW6aqaZ

“I’ve said before and I apologize for the confusion,” he said. “Oh, I didn’t… that’s my national security adviser,” he added while pointing to the side.

“We’ve got a lot of people here, I apologize,” Biden continued. “I’m going to get in trouble, but… anyway, we’ll get back to that.”

In April 2021, Biden took a question from a reporter and he gave a similar response.

“I am sorry. Just… last question I will take,” Biden replied. “I’m really going to be in trouble.”

Biden made a similar allusion to getting in “trouble” at the G7 summit about taking a reporter’s question.

“I’m sorry, I’m going to get in trouble with staff if I don’t do this the right way,” Biden said.

This is not a one-off case of the president making a joke at a serious press conference. It is yet another sign that American people have a ‘president’ who is not in charge of his own White House.