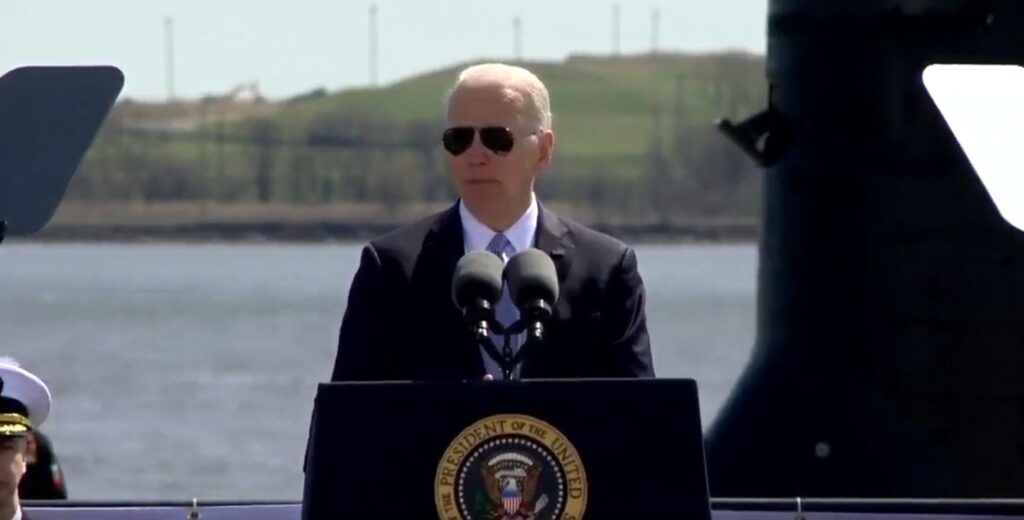 President Biden delivered remarks at the USS Delaware Commemoration Ceremony in Wilmington on Saturday, where he said he was “deeply proud” of the work former “vice president” Jill Biden is doing.

Biden didn’t even correct himself when he made the striking gaffe. Watch:

“I’m deeply proud of the work she is doing as first lady with Joining Forces Initiative she started with Michelle Obama when she was vice president and now carries on,” the president said without missing a beat.

It was yet another eyebrow-raising error in an accumulating list of serious mistakes the White House has had to correct or walk back in recent weeks.

On Saturday, the White House stealth-corrected the president’s erroneous remark.

“And I’m deeply proud of the work she is doing as First Lady with Joining Forces initiative she started with Michelle Obama when she [I] was Vice President and now carries on,” the White House’s official transcript said.

The Biden administration has a long history of making such misidentification remarks.

This is not the first time this week that Biden has made such an unusual reference about himself.  Earlier this month, Biden called Kamala Harris “the First Lady.” (That would be his own wife Jill Biden.)

In February 2020, he said that he was running for Senate, instead of running for the Presidency.

Joe Biden is not the only one guilty of making such misidentifying remarks. In February, Jill Biden introduced Kamala Harris as the “president” right in front of Joe, as he stared off in a daze. Watch:

The latest Biden gaffe came in front of a solemn and momentous occasion before the U.S. Navy. The Delaware Secretary of State gave historical background on the U.S.S. Delaware’s commission.

“It is highly unusual for a ship to be commissioned outside of a Navy port where it has been built but Senator Tom Carper prevailed upon the United States Navy to bring the submarine to Wilmington so Delawareans could participate in the historic celebration,” the Delaware Secretary of State’s office remarks.

It would be great if America had a president who could rise to the occasion and mark such a ceremony with a speech that inspires confidence in the U.S. commander-in-chief. Instead, Americans are left in doubt whether the president even remembers his own wife. Disturbing.

Biden Raises More Questions About His Mental Health: Bizarrely Refers to Himself by His Own Name