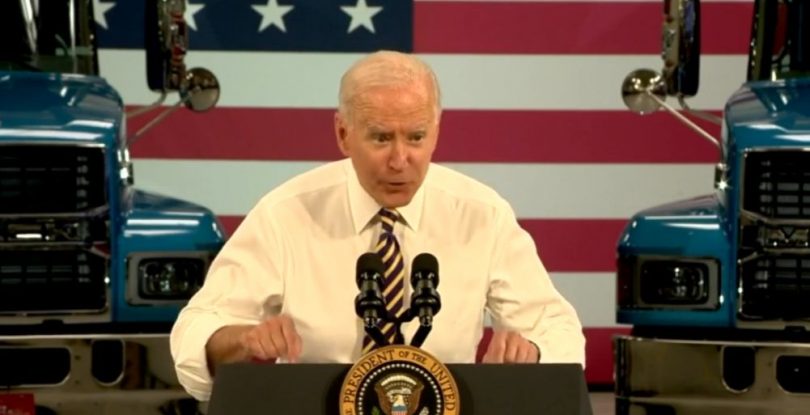 President Joe Biden is struggling again to explain basic things to the American people. For example, why he ran for president in the first place.

On Wednesday, Biden spoke at a Mack Truck facility in the Lehigh Valley in Pennsylvania to pitch his massive infrastructure package.

Standing in front of a backdrop of an American flag and two semi-tractor trailers, that’s when he seemed to forget something. Like how to finish his point. Watch:

“Secondly, to rebuild the backbone of the country,” he continued. “Hard working middle class folks who built this country.”

Then came the predictable: He forgot to add a third point. He was apparently distracted by the applause and about the lie he was about to tell.

You can always tell Biden is about to tell a whopper when he says, ‘it’s not a joke’ or ‘I’m serious’ or something along those lines.

“And by the way, in case you regret anything, I just want you guys and women union know that if it weren’t for the UAW in 1972, I never would have won,” he added. “You think, I’m kidding. We had the largest percentage of union workers are many state in the nation in Delaware back then, including Michigan.”

“Because we’re a small state and we had big plans,” he rambled on. “But so, so before you get upset, remember: you’re, you’re, you’re you’re to blame. Look folks, I think a lot of has come from similar backgrounds…”

Biden appears to be declining rapidly with bizarre outbursts and even incomprehensible speech. A reporter recently asked him about Defund the Police and his response was quite remarkable.

“Are there people in the Democratic Party who want to defund the police?” a reporter asked.

“Are there people in the Republican Party who think we’re sucking the blood out of kids?” he retorted.

“I’m not sure,” the reporter replied as Biden walked away.

More recently, Biden made an unintelligible remark that Americans are struggling to interpret. Snopes couldn’t even disprove that he allegedly said, “my butt’s been wiped.” All is not well in Bidenland.