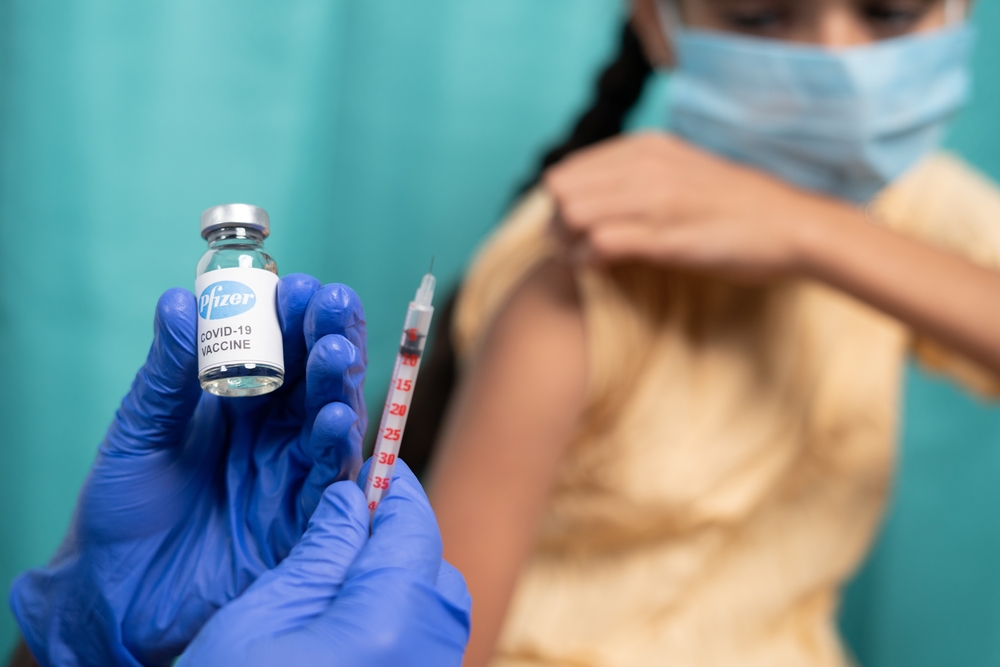 Pharmaceutical giant Pfizer is pushing the Food and Drug Administration to approve its mRNA shots for children under 5 years old.

“Pfizer and its partner BioNTech are expected as soon as Tuesday to ask the Food and Drug Administration to authorize a coronavirus vaccine for children under 5 years old as a two-dose regimen while they continue to research how well three doses work,” the New York Times reported.

“Federal regulators are eager to review the data in hopes of authorizing shots for young children on an emergency basis as early as the end of February, according to multiple people familiar with the discussions, who were not authorized to speak publicly,” the report continued. “If Pfizer waited for data on a three-dose regimen, the data would not be submitted until late March and the vaccine might not be authorized for that age group until late spring.”

There have been 280 Covid-related deaths from ages 0-4 years old since the beginning of the pandemic. There were 23.2 million children this age, as of 2020. 95% of Covid-related deaths have underlying health conditions. Children thus have a 99.999% chance of survival and healthy children have over a 99.9999% chance of survival. This is effectively 100%. Children are not at significant statistical risk from Covid-19.

Children are at increased risk of heart inflammation due to the mRNA shots, however, which do not have reliable long-term side effects data. As reported in Science in June, the shots have been tied to spikes of myocarditis and pericarditis cases in young people.

This isn’t stopping Pfizer from putting ‘profits over people,’ however. In an interview with CNBC in November, Pfizer CEO Albert Bourla was “optimistic” that the mRNA shots would be approved for children under 5 years old:

Pfizer’s revenue in 2022 is projected to be $29 billion, according to the report.

In early January, the FDA authorized a booster shot of Pfizer’s COVID-19 vaccine for children ages 12 to 15. The FDA also authorized a Pfizer booster for immunocompromised children ages 5 to 11. This would include those who have had an organ transplant or an underlying health condition.

The FDA also shortened the waiting period between a second dose of Pfizer and a booster shot from six months to five months. While this change applies only to Pfizer’s vaccine, the FDA said in a news release, the agency will continue to review data on COVID-19 vaccines and “provide additional updates as appropriate.”

The FDA held a media call in January with Janet Woodcock, the FDA Acting Commissioner, Dr. Peter Marks, its Director at the Center for Biologics. Dr. Peter Marks said that the risk of myocarditis to 12 to 15 year age range for a third shot was “quite acceptable” compared to potential benefits, even though an Israeli study showed that this age group was two to three times risk of myocarditis after the second shot.

Science’s report on heart inflammation should give health practitioners pause if pushed to reflexively administer the mRNA shots for this age cohort.

“The COVID-19 vaccine made by Pfizer and BioNTech appears to put young men at elevated risk of developing a heart muscle inflammation called myocarditis, researchers in Israel say,” Science reported. “In a report submitted today to the Israeli Ministry of Health, they conclude that between one in 3000 and one in 6000 men ages 16 to 24 who received the vaccine developed the rare condition. But most cases were mild and resolved within a few weeks, which is typical for myocarditis. “I can’t imagine it’s going to be anything that would cause medical people to say we shouldn’t vaccinate kids,” says Douglas Diekema, a pediatrician and bioethicist at Seattle Children’s Hospital.”

“Israeli health officials first flagged the issue in April, when they reported more than 60 cases, mostly in young men who had received their second dose of vaccine a few days earlier,” the report continued. “Around the same time, the U.S. Department of Defense began to track 14 such cases. In mid-May, the U.S. Centers for Disease Control and Prevention said it, too, was reviewing myocarditis cases. Officials at the European Medicines Agency said on 28 May they had received 107 reports of myocarditis following the Pfizer-BioNTech vaccine, or about one in 175,000 doses administered. But relatively few people under age 30 have been vaccinated in Europe.”

Cardiologists have reported a huge spike in heart inflammation cases to the American Heart Association (AHA). A cardiac surgeon in November circulated a warning to the AHA that heart inflammation markers are drastically increasing in patients in conjunction with mRNA vaccination rates.

The FDA has been ordered to turn over Pfizer’s clinical trial data associated with its Emergency Use Authorizations. However, after a judge rejected its proposed timeline of 75 years to turn over the data, Pfizer has intervened in the case and is seeking a delay.

The FDA “has now asked the Court to make the public wait until May for it to start producing 55,000 pages per month and, even then, claims it may not be able to meet this rate,” attorney Aaron Siri writes.

In addition to its complete lack of transparency, a whistleblower has accused the company of falsifying clinical trials data. Pfizer has had to settle claims in the past worth billions of dollars for “deceitful” pharmaceutical advertising.