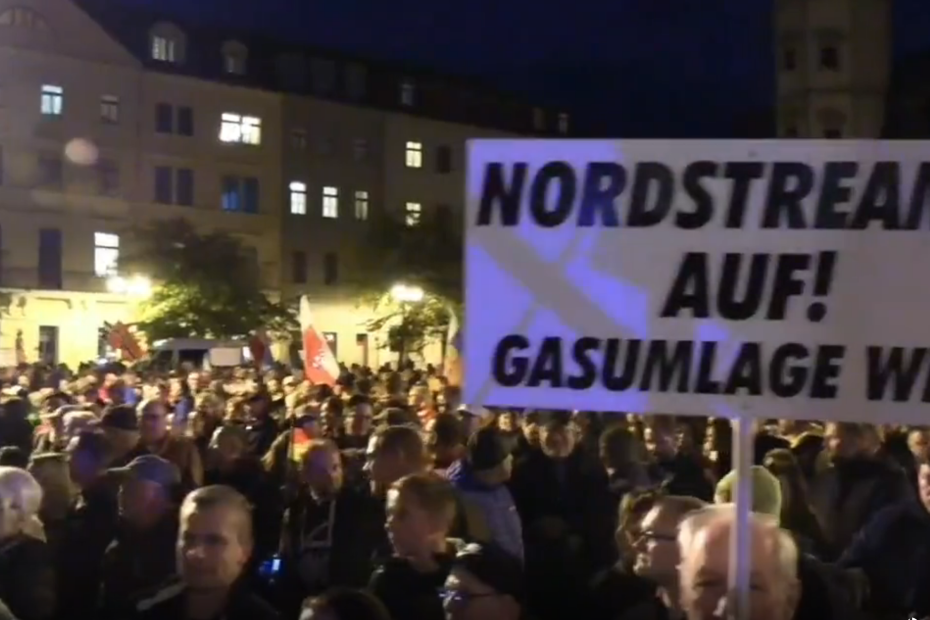 The Nordstream 2 natural gas pipeline from Russia to Germany suffered catastrophic damage in a series of explosions on Monday. According to Danish authorities, the explosions were the result of “deliberate actions.” European Union Commission President Ursula Von der Leyen said the leaks were due to “sabotage.”

The massive pipeline explosions occurred near the Danish island of Bornholm, which is located in international waters. The methane gas that is pouring out from is now the basis of an environmental catastrophe. A worst case scenario of 778 million cubic meters of methane gas would comprise a record amount of the gas released into the atmosphere from any manmade source during a single event.

One day prior to this devastating attack on Nordstream 2 on Monday morning, thousands of Germans took the streets to protest a huge surge in energy prices in the Central European country.

“Thousands of people in Gera in Germany against Olaf Scholz’s policy and the explosion of energy and gas prices,” Radio Genova reported on Monday. “They demand an end to sanctions on Russia and the reopening of the Nord Stream 2 gas pipeline. Demonstrations also in other German cities but EU media censors them.”

There were more protests on Wednesday in the Czech Republican over the spike in energy prices fueled by the Russia-Ukraine war and ensuing sanctions.

Thousands of people in Prague today against the EU and NATO. They want to end the sanctions against Russia and force the government to import Russian gas. Demonstration censored by the EU media. It will be a very hot autumn in Europe and beyond. pic.twitter.com/QwwlSZGJv4

The energy price explosion has accompanied a drastic rise in inflation, such as in Germany.

“Inflation in Germany jumps to 10% in September — the highest annual increase in the history of the index since World War II,” Disclose TV reported on Thursday.

Many of the German protesters were also calling for a peaceful resolution to the Russia-Ukraine conflict, which has fueled the skyrocketing prices. Germany relies heavily on natural gas, which comprises 27% of its overall energy portfolio.  When it comes to home heating and industrial power, natural gas is about 37% of the energy supply, overall.

As the Guardian reported in July, “Very little gas is flowing from Russia to Germany through any of the three pipelines that connect the two countries. The Russian state-owned gas giant Gazprom in May ceased deliveries through the Yamal pipeline passing through Belarus and Poland, while the Ukraine-transiting Transgas, an extension of the Soyuz pipeline from Russia, is prioritising deliveries to Slovakia and Austria. Germany’s most important pipeline, Nord Stream 1, used to carry up to 170m cubic metres of gas a day. But in mid-June Gazprom reduced its deliveries to about 40m cubic metres a day, citing the delayed ‘repair’ of a turbine by the German company Siemens.”

It is in this context that not even 12 hours after the explosions of Nordstream 2, European Union officials gathered in Szczecin, Poland to inaugurate the Baltic Pipe. The pipeline is expected to bring natural gas from Norway to Denmark to Poland, where it can be distributed across the European Union. The Baltic Pipe would bring 10 billion cubic meters of gas to the E.U., and was initially planned in 2014 after the Russian annexation of Crimea as a way to mitigate the dependence on Russian gas.

Thus, amid this confluence of events, it is with great scrutiny that veiled threats from the Biden administration are now being analyzed by international observers.

Pres. Biden: "If Russia invades…then there will be no longer a Nord Stream 2. We will bring an end to it."

Reporter: "But how will you do that, exactly, since…the project is in Germany's control?"

Biden: "I promise you, we will be able to do that." https://t.co/uruQ4F4zM9 pic.twitter.com/4ksDaaU0YC

In February, President Biden warned: “If Russia invades…then there will be no longer a Nord Stream 2. We will bring an end to it.”

Accusations that Russian President Vladimir Putin blew up the Nordstream 2 pipeline, which carries natural gas supplied by state-controlled gas giant Gazprom, rely in part on U.S.-sourced reports that Russian warships were in the vicinity prior to the explosions. The U.S.-based sources also note that Russian submarines were in the area the previous week.

However, there are a number of major flaws with the presumption that Putin must have ordered the pipeline destroyed. Firstly, Putin controls the gas fed into Nordstream 2, thus, he only needs to order the gas to be shut off, as he has done on previous occasions. Secondly, the Russian government relies heavily on natural gas, which constitutes 45% of the state budget, according to the International Energy Agency.

There are a number of indicators that Germany has grown increasingly aggressive in its actions to offset natural gas shortfalls that have arisen since the start of the Russia-Ukraine War.

“Germany took control of a major Russian-owned oil refinery… risking retaliation from Moscow as Berlin strives to shore up energy supplies and meet its European Union commitment to eliminate Russian oil imports by the end of the year,” Reuters reported.

“The economy ministry said it was putting a unit of Russian oil firm Rosneft under the trusteeship of the industry regulator and taking over the business’ Schwedt refinery, which supplies 90% of Berlin’s fuel,” the report added.

“This is a far-reaching energy policy decision to protect our country,” Chancellor Olaf Scholz said.

This is a strikingly desperate move by a country that was once considered to be the engine of Europe. But the German government cannot say that they weren’t warned.

“Reliance on a single foreign supplier can leave a nation vulnerable to extortion and intimidation,” former President Donald Trump said in a speech at the United Nations in 2018 that drew chuckles from the German delegation.

Are you still laughing, Germany?

We tried to warn you. #NordStream2 pic.twitter.com/kawsJZ2nMk

“That is why we congratulate European states, such as Poland, for leading the construction of a Baltic pipeline so that nations are not dependent on Russia to meet their energy needs. Germany will become totally dependent on Russian energy if it does not immediately change course,” Trump said. “Here in the Western Hemisphere, we are committed to maintaining our independence from the encroachment of expansionist foreign powers.”

Jen Psaki Gives the Game Away: If Election is About Who is ‘Most Extreme,’ Then Democrats Will Win