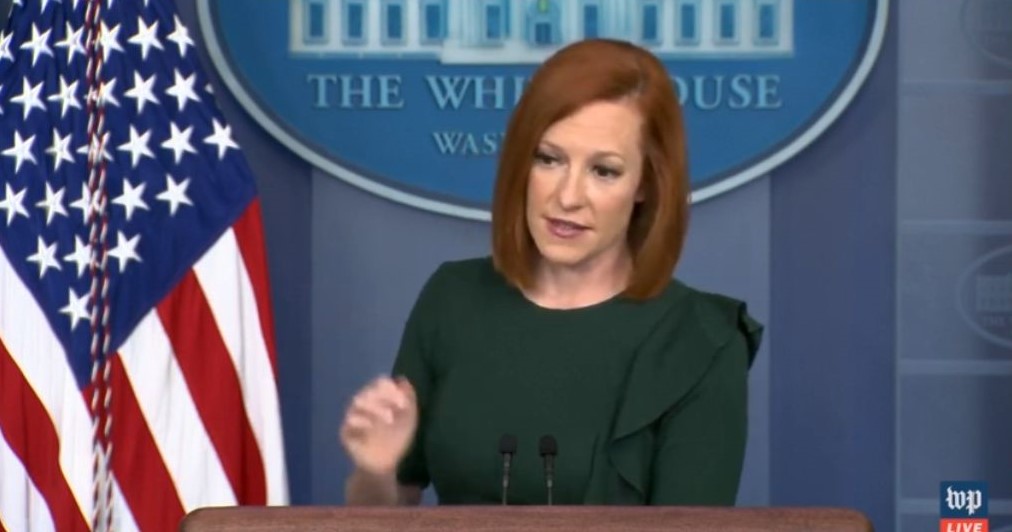 White House Press Secretary Jen Psaki reacted to questioning about the timing of Kamala Harris finally agreeing to go to the southern border as predicted.

She lied. Watch as Psaki tries to talk herself out of the remarkable coincidence that the vice president is going to the border just days before Donald Trump.

“So, about today’s announcement, why is the Vice President visiting the border this week when earlier this month she dismissed a trip like that saying it would be a grand gesture?” Fox News’ Peter Doocy asked.

“She also said in an interview with NBC that she would be open to going to the border if it was an appropriate time,” Psaki replied. “She said that after she said that, so that’s important context as well.”

“Okay, important context,” Doocy retorted. “I’ve got that NBC interview right here. She was talking about how she hasn’t been to the border, she hasn’t been to Europe either. So does she think that these two things are the same?”

“And again, Peter, I think she also said in the same interview that she would be open to going to the border at an appropriate time,” Psaki insisted.

On Univision in June, Kamala blew up at a female reporter for daring to ask about going to see the border crisis.

“When are you going to go to the border, Vice President?” the reporter asked.

“I’m not finished,” Kamala snapped at the Univision host.

Just as embarrassing was an exchange with NBC’s Lester Holt. During her response, however, she may have revealed a little bit more than she wanted to.

Cringe. Kamala Harris doesn't get it.

Holt: "Do you have any plans to visit the border?"

Holt: "YOU haven't been to the border."

Harris: "…..and I haven't been to Europe. I don't understand the point you're making." pic.twitter.com/fFXMf8X0b6

“Do you have any plans to visit the border?” Holt asked.

“YOU haven’t been to the border,” Holt pointed out.

“…..and I haven’t been to Europe. I don’t understand the point you’re making,” she claimed.

Former President Donald Trump on Wednesday took Vice President Kamala Harris to task over the suspect timing of her recent announcement that she will visit the border on Friday.

“After months of ignoring the crisis at the Southern Border, it is great that we got Kamala Harris to finally go and see the tremendous destruction and death that they’ve created–a direct result of Biden ending my very tough but fair Border policies,” Trump wrote.

“If Governor Abbott and I weren’t going there next week, she would have never gone!” he added.

On Wednesday, Politico reported that Harris is “heading to the U.S.-Mexico border this week, amid an unrelenting chorus of criticism from Republicans over her failure to visit there.”

“Harris, who was tasked by President Joe Biden to lead diplomatic efforts to stem the flow of migrants arriving on the southern border, will make a stop in El Paso, Texas on Friday, according to sources familiar with the trip,” the report noted. “She is expected to be accompanied by Homeland Security Secretary Alejandro Mayorkas.”

Last week, Donald Trump ripped Kamala Harris for failing in her duty to stem the tide of illegal immigration to the United States over the southern border. He accepted an invitation to visit the border in person.

“I have accepted the invitation of Texas Governor Greg Abbott to join him on an official visit to our Nation’s decimated Southern Border on Wednesday, June 30, 2021,” Trump said in a statement.

“The Biden Administration inherited from me the strongest, safest, and most secure border in U.S history and in mere weeks they turned it into the single worst border crisis in U.S history,” Trump wrote. “It’s an unmitigated disaster zone.”

It looks like the “appropriate time” for Kamala Harris to see the border is just days before Donald Trump. It will surely still be an “unmitigated disaster zone” when Trump sees it for himself.