AFL-CIO President at Biden Meeting: Inflation Crisis Will Help Us ‘Reshape the Future’ 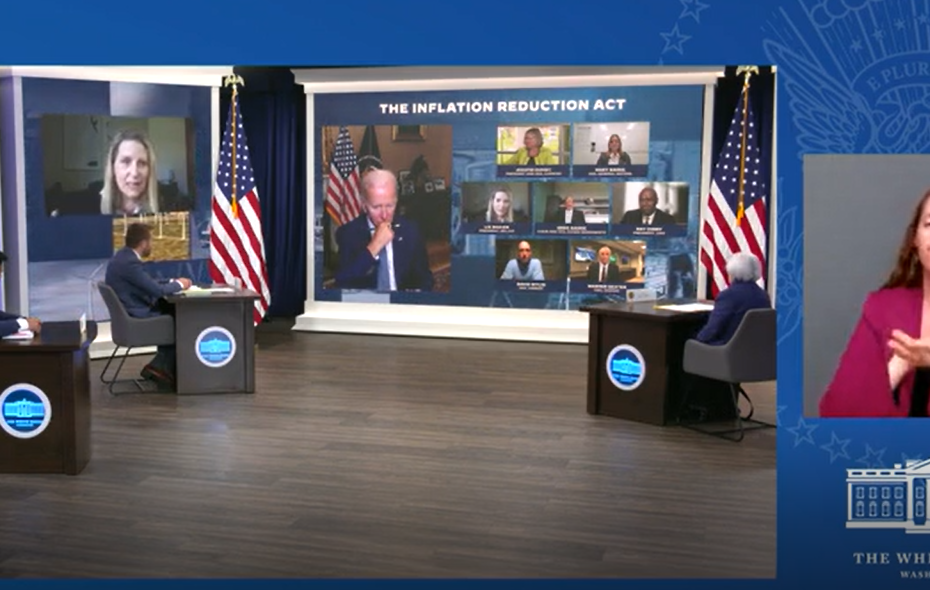 President Joe Biden’s joint meeting on the Inflation Act was informative, but not for ideas that might actually help lower inflation. It confirmed that inflation is yet another crisis that radical Democrats don’t intend to let ‘go to waste.’

One of the participants at Biden’s teleconference, AFL-CIO President Liz Schuler, said the quiet part out loud: Democrats see inflation as a political tool that will help radicals ‘reshape the future.’

“ I, too, want to start by thanking President Biden and the administration for your commitment to American manufacturing and, of course, for inviting us to be a part of this conversation today,” Shuler said. “I think it’s a great mix of labor and business leaders and it shows how important and historic the Inflation Reduction Act is.”

“And I’m bringing the voice of our 57 unions, 12.5 million members, who believe this bill is going to help us reshape the future and deliver real help to working families by reducing rising energy and health care costs.”

“When I’m on the road talking to working people, they’re worried about making ends meet, and so these steps to lower health care costs, especially the high costs of prescription drugs, investing in our clean energy future, addressing our broken tax code, this is going to deliver fundamental economic change across America,” she added.

“And by the way, asking the top 150 or so companies to start paying their fair share of taxes is music to our ears,” she added. “And let’s just be clear, asking 150 of the largest, most profitable companies to pay a minimum of 15 percent in taxes is not going to harm manufacturing investments in the U.S. In fact, much of the revenue created by this tax would be from companies who have historically dodged taxes by manufacturing overseas.”

“So, our members are especially excited about the historic clean energy investment that this bill would make because, as was said, it’s going to create millions of good jobs for working people and cut climate pollution by 40 percent,” she claimed.

“So this is what we need to jump-start the clean energy transition, address the climate crisis, make clean energy more accessible and affordable, and these investments would actually decrease the cost of domestic clean energy by over one third, and so that’s going to be a game changer for consumers.”

“We urge Congress to move it quickly, get it passed and signed into law, get it to the President to sign,”Shuler concluded.

If President Biden signed the bill, it would break a campaign pledge not to raise taxes on the middle class, according to the non-partisan Joint Committee on Taxation.

Biden read a false statement on the Inflation Act that claimed the bill would lower taxes and fight inflation. Watch:

“Let me be clear,” Biden said. “Despite what some folks are saying, the Inflation Reduction Act makes sure that no one earning less than $400,000 a year will pay a penny more in federal taxes, notwithstanding all these ads you see on television. But don’t take my word for it. Nearly 130 economists, seven Nobel laureates in economics, former treasury secretaries, the Federal Reserve vice chair, former director of the Congressional Budget Office wrote that this bill will, quote, ‘fight inflation and lower costs for American families, while setting the stage for strong, stable and broadly shared long-term economic growth,’ end of quote.”

However, the Joint Committee on Taxation spells out the ‘myths’ about the Inflation Act in an overview. The JCT estimates the following tax effects:
• In 2023, taxes will increase by $16.7 billion on American taxpayers earning less than $200,000—a nearly $17 billion tax targeted directly at low- and middle-income earners next year, amidst stagflation.
• The $17 billion hit alone is confirmation that the Biden pledge to not raise taxes on anyone earning less than $400,000 is shattered by the latest tax-and-spend bill.
• The proposal would raise another $14.1 billion from taxpayers earning between $200,000 and $500,000.
• According to JCT data, 98 percent of all tax returns filed by those in the $200,000 to $500,000category are filed by those earning between $200,000 and $400,000, with at least three-fourths of theincome in the $200,000 to $500,000 category also coming from those below $400,000. This means it is likely that at least half of all new tax revenue raised next year would come from those earning under $400,000.
• Throughout the ten-year window, the average tax rate for nearly every single income category would increase.
• By 2031, when the new green energy credits and subsidies provide an even greater benefit to those with higher incomes, those earning below $400,000 are projected to bear as much as two-thirds of the burden of the additional tax revenue collected that year.

The Inflation Act would also appropriate $80 billion to the Internal Revenue Service (IRS) for more tax enforcement. It would mean billions more wasted on ‘fighting climate change’ and an army of IRS agents to audit Americans for every last penny to fund the government.

It’s a lose/lose proposition for the American middle class, no matter how you cut it.

So the “Inflation Act” is merely the Democratic Party’s way of cynically seizing on another crisis that it created in order to implement “fundamental economic change,” which just so happens to be more seizure of Americans’ wealth for redistribution to green energy companies, lobbyists, and radical activists.