Maricopa County has responded to the independent audit update provided to the Arizona Senate on Thursday. It attempts to explain discrepancies that were brought up by the audit team, including Cyber Ninjas’ CEO Doug Logan.

The Arizona Senate hearing from Thursday can be watched in full below:

“AZ Senate leadership hired unqualified auditors with a lack of election knowledge & a wealth of political bias,” Maricopa County stated. “The claims these contractors advanced in yesterday’s briefing to senators enabling & enriching them were not based in fact. We refute more claims below.”

“CLAIM: 74,000 more mail-in ballots were counted in Nov. 2020 than were sent. FACTS: @maricopavote calculated the true number of requests and returns:

“So the claim is not just wrong but completely wrong,” Maricopa County said. “We don’t know where Cyber Ninjas came up with that idea or number.”

However, a close check of the transcript shows that this is not the claim. What was claimed is that 74,000 mail-in ballots lacked proper documentation.

“So there should be an equal… there should be more EB32s, more sent out then there are received,” he added. “Specifically, with these we can tie them to a specific individual it was mailed to. And so, we have 74,000 where we have, it came back from individuals where we don’t have a clear indication that it was ever sent out to them.”

Maricopa County provided additional details in the tweet thread below.

“CLAIM: More than 11,000 names were added to the voter rolls after Election Day but were recorded as casting a ballot in the Nov. election.”

“Only eligible voters are added to the voter rolls,” the county continued. “Of note: 7,605 provisional ballots were rejected in the General Election due to the individual not being registered to vote. It is possible for a voter to not be on the voter rolls, vote a provisional ballot, receive credit for voting, that ballot not actually be counted because they voted provisionally, and then later show up on the voter rolls. Since the Senate contractors are unqualified and untrained for this work, it’s tough to know exactly what data they’re using to come up with numbers.”

It should be noted that the audit team included former Arizona Secretary of State Ken Bennett, acting as the Arizona Senate liaison; a digital forensics expert with more than 25 years doing audits for private corporations and governments Ben Cotton, and the CEO Doug Logan, whose company has experience auditing for private corporations and governments.

As for the claim Maricopa County is disputing, it is based on the voter roll file that was delivered to them, according to Logan.

Garrett Archer of ABC News proffered an explanation on Twitter.

“[Maricopa County] on the 11 thousand ‘added to the voter rolls’. This one takes a second to explain so I will thread,” Archer wrote. “Cyber Ninjas were using publicly available voter files in their analysis. These are available to the parties, as well as those that prr them (for a fee)…”

“The publicly available files only include voters that are in an ACTIVE or INACTIVE status, but there are other statuses, example ‘suspense’ which means the voter has yet to provide a qualified ID,” Archer went on. “A voter in suspense that goes to the polls casts a provisional ballot b/c their ID needs to be verified. If they do provide said ID and are verified, not only does their ballot count, but they are moved into ACTIVE status.”

This reference was actually from a legal affidavit cited by Doug Logan. This is verbatim what was stated at the hearing.

“When mail-in ballots were received, that so many of them were received, that the standards reduced over time,” he said. “They originally talked about, there was initially 20 points of comparison on the signature, then after some time they were told to go to ten points a signature, ten points of comparison, and then five,” he noted. “And then eventually, they were just told to let every single mail-in ballot through.”

“FACTS: When ballots are delivered to Maricopa County from military voters, overseas voters, large print ballots, braille ballots, or when they are too damaged to be read by a tabulator… Maricopa County duplicates these ballots to ensure the votes can still be counted,” the rebuttal continued. “The Elections Department assigns a matching serial number to both the original and duplicated ballot. This number can be used to compare the ballots. The accuracy of Maricopa County’s duplication process was confirmed in court (CV2020-015282 Ward v. Jackson) where the plaintiffs randomly sampled 1,626 duplicated ballots.”

Former Arizona Secretary of State and State Senate liaison Ken Bennett discussed the chain-of-custody procedures and the questions involving duplicated ballots. Bennett said that while some duplicate ballots in bright red markings, some were stenciled on in pencil, and some were even missing. 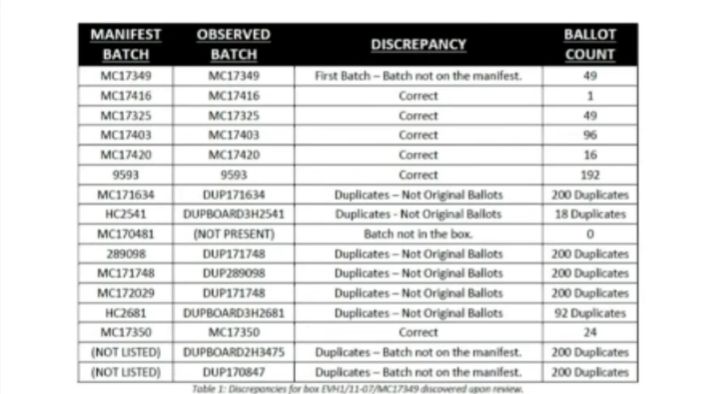 “So, you have the original ballots,” Logan said. “And then you have the duplicates. And there was roughly 50,000 total. So, there’s 25,000 originals. And roughly 25,000 duplicates. Assuming that they all matched up with that. So, in order to make sure that things are not double-counted and things are attributed properly… it’s very important to be able to match them up. In fact, this is why their statute, it says there is supposed to be a serial number on the original that you can match up with the serial number on the actual duplicates. So, you know one for one that they were counted properly, and from an audit standpoint, the original is exactly the same as the duplicate.”

“Serial numbers really should be unique,” Logan goes on. “There should be one original ballot with a serial number and one ballot which is the duplicate of it with the same serial number.”

“We also have a whole bunch of ballots that don’t have any serial number on them,” he added.

“CLAIM: Maricopa County’s Tabulation System is connected to the internet.” 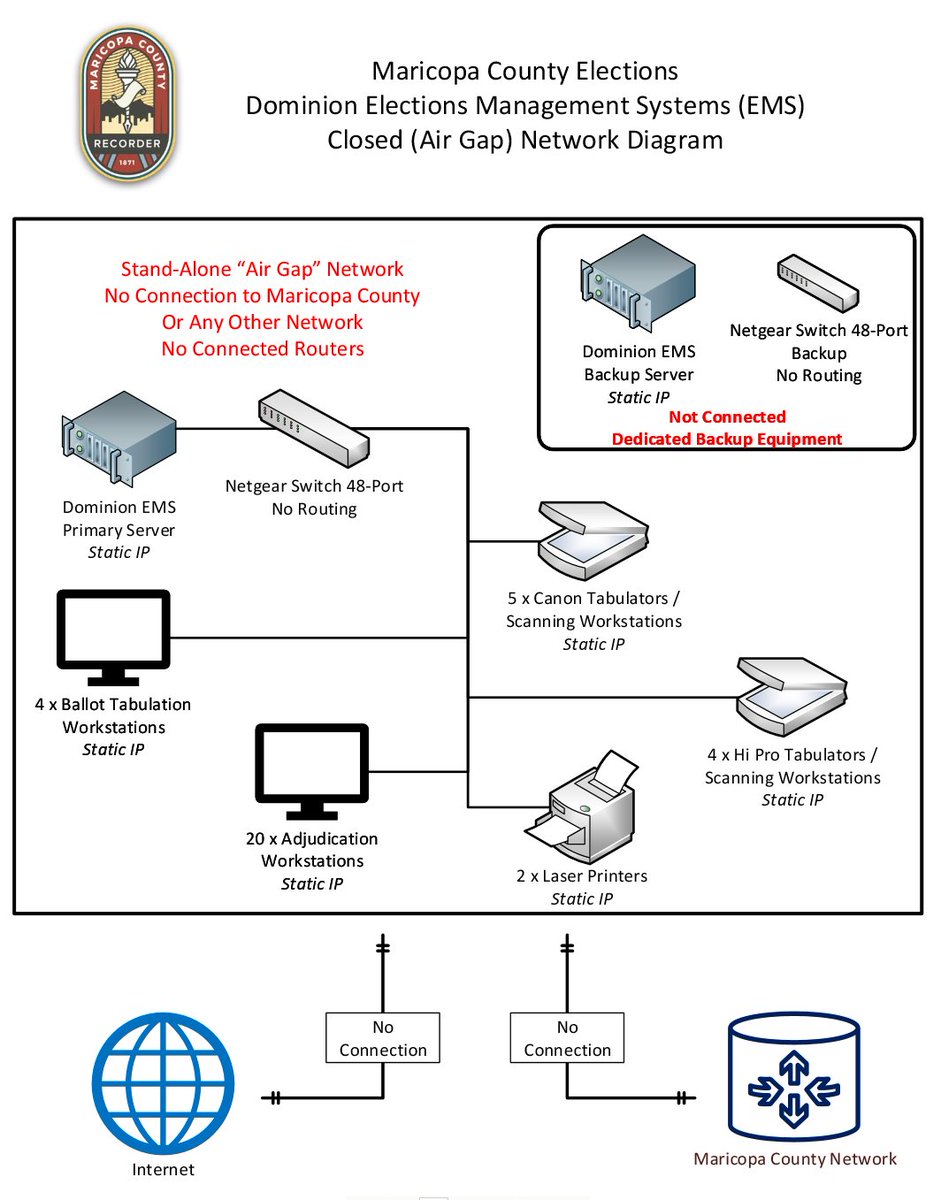 The election officials have refused to turn over servers that were shared in the same space as Maricopa County law enforcement.

However, the Cyber Ninjas digital forensic auditor Ben Cotton says the server configuration had a public facing side that essentially means it was “breached.”

“The registration server that was public facing did have unauthorized access to that, in cybersecurity terms, it was breached,” said Cotton.

Maricopa County denies this is the case.

“FACTS: This is false. The event in question involved an individual inappropriately accessing and downloading publicly available info. The website is in no way connected to the Election Management System.”

This factual dispute by Maricopa County has the most merit. A password was queried at least 34,000 times in one day, but that does not mean it was “hacked.” However, the query script did render the memory window needed to check data going back to the election day unavailable to the auditors, since the master admin key needed to probe the data is only held by Dominion Voting Systems and not even the Maricopa County election workers themselves have it.