Reuters Blows Up Media with New Report on Ivermectin, But Drug’s ‘Anti-Viral Properties’ are Nothing New

Reuters caused a stir on Monday with its report that a Japanese company now claims ivermectin has ‘anti-viral properties’ against Covid. The news company retracted its headline that said it was “effective” against Covid.

The company, which has been working with Tokyo’s Kitasato University on testing the drug as a potential treatment for COVID-19, did not provide further details. The original Reuters story misstated that ivermectin was “effective” against Omicron in Phase III clinical trials, which are conducted in humans.

Clinical trials are ongoing, but promotion of ivermectin as a COVID-19 treatment has generated controversy.

The Japanese study is a double blind study and thus would be superior to most research on Covid-19 treatments. Pfizer, for example, unblinded its placebo group during its “vaccine” clinical trials and the FDA still granted it Emergency Use Authorization. (More flaws with Pfizer’s clinical trials can be read here.)

Despite Reuters’ claim that ivermectin is merely an “anti-parasite drug,” a search of the National Institute of Health’s website shows scientific research demonstrating the drug’s wide-ranging effects going back at least a decade.

“Discovered in the late-1970s, the pioneering drug ivermectin, a dihydro derivative of avermectin—originating solely from a single microorganism isolated at the Kitasato Intitute, Tokyo, Japan from Japanese soil—has had an immeasurably beneficial impact in improving the lives and welfare of billions of people throughout the world,” the Proceedings of the Japan Academy stated in February 2011, adding, “It has also been used to successfully overcome several other human diseases and new uses for it are continually being found. This paper looks in depth at the events surrounding ivermectin’s passage from being a huge success in Animal Health into its widespread use in humans, a development which has led many to describe it as a ‘wonder’ drug.”

“There are few drugs that can seriously lay claim to the title of ‘Wonder drug’, penicillin and aspirin being two that have perhaps had greatest beneficial impact on the health and wellbeing of Mankind,” the academy continued. “But ivermectin can also be considered alongside those worthy contenders, based on its versatility, safety and the beneficial impact that it has had, and continues to have, worldwide—especially on hundreds of millions of the world’s poorest people.

There are published journal articles on ivermectin’s “antiviral” properties on the NIH website.

“Ivermectin proposes many potentials effects to treat a range of diseases, with its antimicrobial, antiviral, and anti-cancer properties as a wonder drug,” The Journal of Antibiotics states. “It is highly effective against many microorganisms including some viruses. In this comprehensive systematic review, antiviral effects of ivermectin are summarized including in vitro and in vivo studies over the past 50 years.”

“Ivermectin plays a role in several biological mechanisms, therefore it could serve as a potential candidate in the treatment of a wide range of viruses including COVID-19 as well as other types of positive-sense single-stranded RNA viruses,” the September 2020 journal article added. “In vivo studies of animal models revealed a broad range of antiviral effects of ivermectin, however, clinical trials are necessary to appraise the potential efficacy of ivermectin in clinical setting.”

Joe Rogan, who is undergoing a coordinated media campaign to silence his influential voice, had a simple reaction to the news. 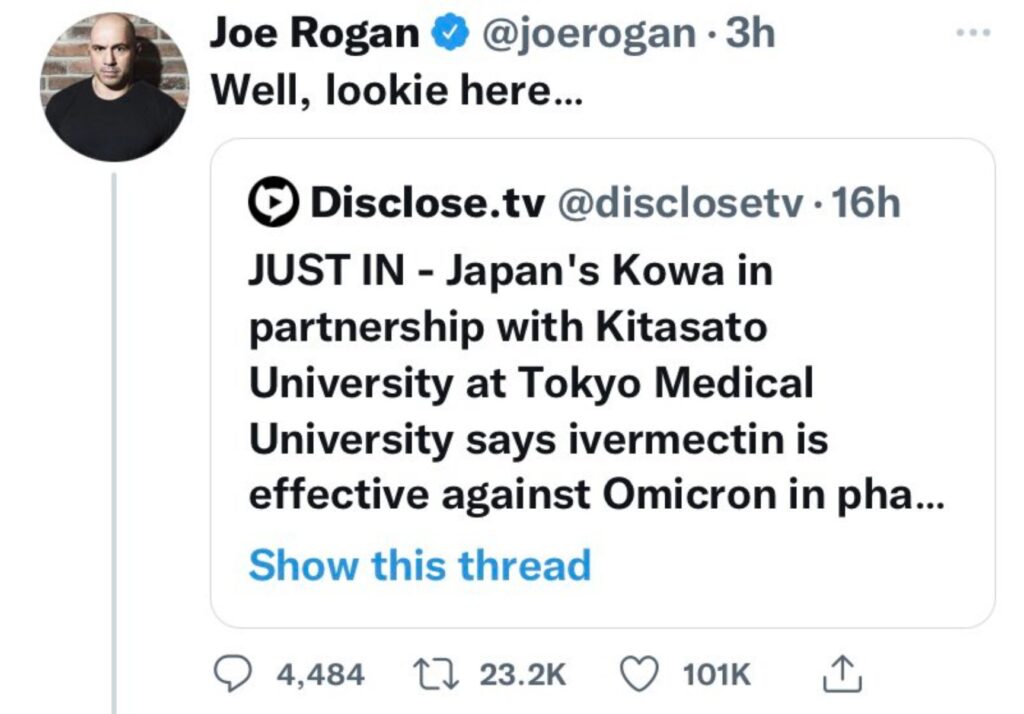 Lawyer Aaron Siri, who is suing the FDA to release the Pfizer clinical trials data related to its mRNA shot’s Emergency Use Authorization, noted the Reuters report.

Reuters: "Ivermectin shows ‘antiviral effect’ against COVID, Japanese company says." Did government attack and censorship regarding this product have a chilling effect and delay studies like this from being conducted?https://t.co/SNk98dnHxn

“Did government attack and censorship regarding this product have a chilling effect and delay studies like this from being conducted?” Siri asked about the study.

This isn’t the first time that Reuters has burst the mainstream media’s bubble with reports on Covid-19. In October, it acknowledged natural immunity is superior to vaccinated immunity by reporting “secondary immune response stronger after infection than vaccination.”