U.S. President Joe Biden took a tour of humiliation in Saudi Arabia on Friday, as part of a a Middle East trip that had earlier included stops with Israeli and Palestinian leaders.

Amid the backdrop of the president pleading with the Saudis to increase their oil production, Saudi Crown Prince Mohammed bin Salman Al Saud, also known as MBS, laughed at Biden to his face.

The reporter was escorted out of the room, President Biden and the Saudi Crown Prince ignored the reporter’s question. 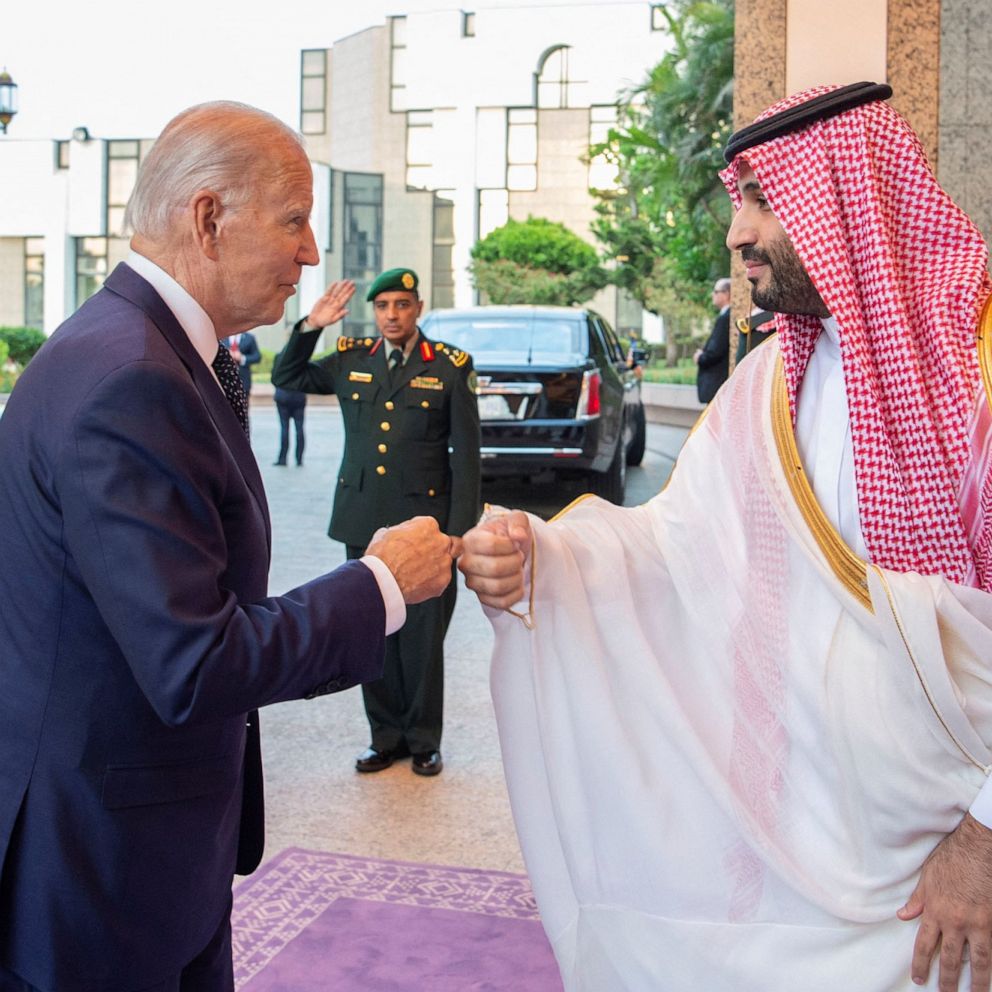 Biden dismissed a reporter’s question after the meeting that he was under “a lot of fire” for greeting Saudi Arabia’s Crown Prince Mohammed bin Salman with a fist-bump and dismissed questions about the potential of another murder like Jamal Khashoggi’s.

“What a silly question,” Biden said to reporters. “How could I possibly be sure of any of that?”

“I just made it clear if anything occurs like that again there, get that response and much more,” he added.

The Washington Post, whose journalist Jamal Khashoggi was allegedly assassinated by MBS, did not fail to note the symbolism.

“That did not appear to be Biden’s intent, and the president has long made clear his discomfort with the crown prince,” the Post noted. “But the gesture–in an image disseminated by the Saudis–ricocheted around the Internet and quickly took on a powerful symbolism ahead of a high-stakes meeting that reversed Biden’s promise to make the kingdom a ‘pariah’.”

BIDEN 2020: I'm gonna make Saudi Arabia "the pariah that they are."

Biden had earlier given MBS a ‘fist-bump,’ and gave a handshake to the Saudi King Salman.

“The fist bump between President Biden and Mohammed bin Salman was worse than a handshake—it was shameful. It projected a level of intimacy and comfort that delivers to MBS the unwarranted redemption he has been desperately seeking.”

The White House’s handlers have urged President Joe Biden to avoid any handshakes with world leaders, preaching instead he use ‘fist bumps,’ purportedly to avoid Covid-19. However, Biden has repeatedly flaunted this directive and shook hands with the elder King Salman.

The Washington Post’s reporting shows there may be a hidden reason behind the apparent directive — avoiding an embarrassing handshake with Saudi Crown Prince Mohammed bin Salman Al Saud, known as MBS.

As National Review noted: “The president had attempted to obscure the fact that he even planned to meet MBS.” A White House statement “that conspicuously omitted any mention of a Biden–MBS meeting was quickly undercut by a statement from the Saudi embassy confirming that there would in fact be a meeting between the two.”

Joe Biden made a big pledge on his campaign trail that he would punish the Saudis for the implicated assassination of Saudi journalist and alleged CIA asset Jamal Khashoggi, who was a key point person with Osama bin Laden in the early 1980s.

“Jamal Khashoggi and his loved ones deserve accountability,” a White House statement in October 2020 read. “Under a Biden-Harris administration, we will reassess our relationship with the Kingdom, end U.S. support for Saudi Arabia’s war in Yemen, and make sure America does not check its values at the door to sell arms or buy oil. America’s commitment to democratic values and human rights will be a priority, even with our closest security partners.”

The Saudi crown prince’s human rights violations are a serious concern for international observers, but Joe Biden now has to go to MBS on bended knee in order for the oil-rich regime to ramp up production to offset his disastrous energy policies at home.

As the Times of Israel pointed out, “scientists today generally agree that people simply don’t catch COVID-19 as a result of physical contact.”

“US President Joe Biden is fist-bumping his way around Israel,” the Times reported. “But his attempt to reduce palm-to-palm contact time during his Middle East trip won’t actually protect him against the coronavirus, medical officials say.”

Thus, the White House handlers’ handshake ban that Biden is flaunting is irrelevant for preventing Covid. It is all about “optics.”

Speaking of optics, there was a glaring difference between the way former President Donald Trump was treated on his foreign visit to Saudi Arabia early in his presidency, and the way that Joe Biden was greeted.

This is how Joe Biden landed in Saudi Arabia.

This was President Biden’s motorcade to meet King Salman.

Critically, President Biden’s groveling to the Saudis is not only humiliating, it is entirely unnecessary.

“We think Texas is a lot closer than Saudi Arabia,’ American Exploration and Production Council CEO Anne Bradbury told Fox News Digital. “And President Biden does not need to be traveling halfway around the world searching for solutions to this energy crisis when the solution is right here at home,”

“If the administration is serious about increasing supply, they should be meeting with producers here at home instead of looking to governments overseas,” added American Petroleum Institute spokeswoman Christina Noel.

No wonder MBS is laughing at President Biden. He could be helping America become stronger and more prosperous, instead, he is seeking to enrich authoritarian regimes abroad. 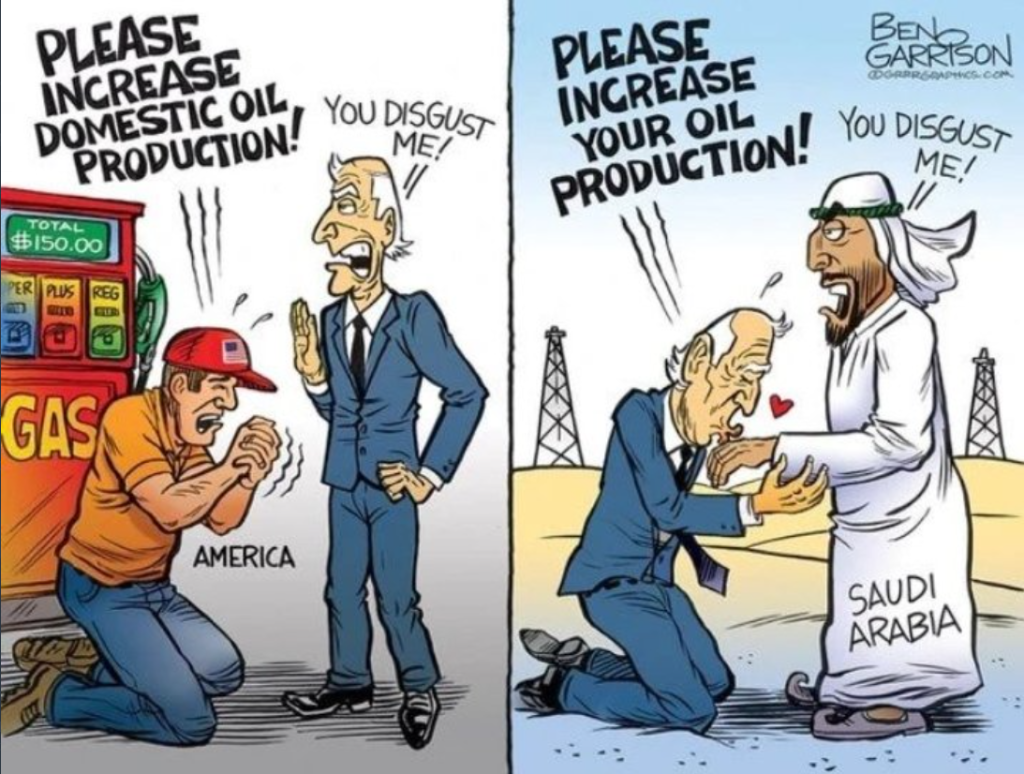 Energy experts do not believe the increased oil production will do much to lower the price of gas in the United States, however.