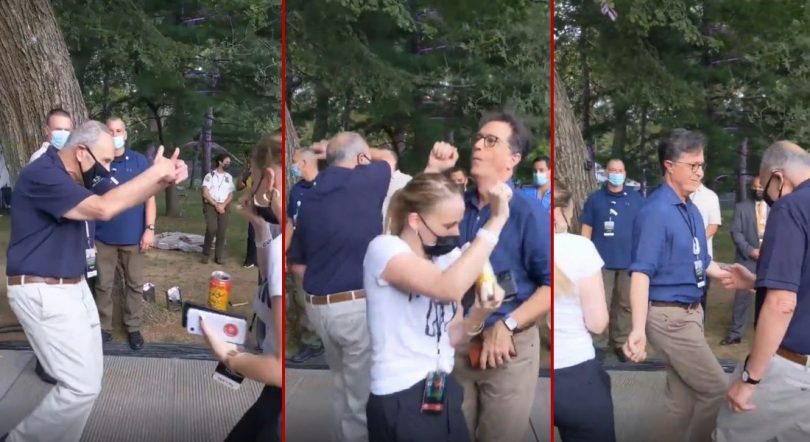 America’s ruling class may not be all as concerned about us as they let on. On Saturday, Senate Majority Leader Chuck Schumer joined comedian/left-wing operative Stephen Colbert backstage at a Springsteen concert in Central Park to dance as Afghanistan burns.

A Press Secretary for failed socialist New York City Mayor Bill de Blasio caught the footage and posted it onto Twitter with the phrase: “Backstage antics.”

Twitter commenters ridiculed Schumer for his tone-deaf display at the concert.

“Life is good for our blue elite while 1000s of Americans are stranded behind enemy lines,” one user remarked.

“Does anyone else throw up a little in their mouth watching this??” another asked.

“The majority leader when Americans are trapped in Afghanistan,” one tweet read.

“I think I just cringed to death,” another said.

The concert was fortunately cut short by the incoming Tropical Storm Henri, saving many concert-goers eyes from bleeding from watching the senseless senator. Headliner acts like Bruce Springsteen and Paul Simon were set to the appear at the vaccinated-entry only concert outdoors.

New York City’s socialist mayor earlier issued a decree that vaccine passports would be needed to ‘unlock’ any public venues, including outdoor concerts, despite the scientific evidence that it is virtually impossible to transmit Covid outdoors.

Meanwhile, Americans are still in harm’s way in Afghanistan. The State Department issued a warning on Saturday to Americans to stay away from Kabul airport unless directed by U.S. authorities. Intelligence reports of ISIS terrorists targeting Americans, and even that the Taliban has beaten Americans who are trying to escape the wartorn country, that collapsed after President Biden’s abrupt unilateral withdrawal of U.S. military troops ahead of an evacuation of civilians.

Between Obama hosting a super-spreader event for his birthday bash at Martha’s Vineyard, Kamala Harris laughing before issuing statements on Afghanistan, Nancy Pelosi going maskless into closed salons to get blow-outs, and Chicago Mayor Lightfoot attending Lollapallooza while threatening more lockdowns, an astute observer would get the message that the so-called ‘elites’ are actually trolling us. These aren’t really ‘gotcha’ moments, but their way of saying that one set of rules exists for them, and another set for the American people.

Trump Thunders About Biden’s ‘Surrender’ at Massive Alabama Rally: ‘The Most Embarrassing Thing That We’ve Ever Seen’