In February 2020, the prominent medical journal The Lancet published a letter signed by several scientists condemning “conspiracy theories” that the novel SARS-CoV-2 virus did not have a “natural origin.” The letter would be held up by media publications around the world as an authoritative statement closing off discussion and investigation of a potential virus leak from the Wuhan Institute of Virology.

The combative wording of the letter, published early on during the COVID-19 pandemic, should have been a red flag for media publications that there may be conflicts of interest at play. A portion of the letter is provided below:

We sign this statement in solidarity with all scientists and health professionals in China who continue to save lives and protect global health during the challenge of the COVID-19 outbreak. We are all in this together, with our Chinese counterparts in the forefront, against this new viral threat.

The rapid, open, and transparent sharing of data on this outbreak is now being threatened by rumours and misinformation around its origins. We stand together to strongly condemn conspiracy theories suggesting that COVID-19 does not have a natural origin. Scientists from multiple countries have published and analysed genomes of the causative agent, severe acute respiratory syndrome coronavirus 2 (SARS-CoV-2), and they overwhelmingly conclude that this coronavirus originated in wildlife, as have so many other emerging pathogens.

The problem for publications that brandished the Lancet letter as “settled science” against all who sought more answers about the coronavirus’s origins is that the science was not settled, as a number of scientists who signed the letter have come to acknowledge.

An investigation by Alexandros Marinos tracked the signatories’ positions on the SARS-CoV-2 virus origins after the Lancet letter’s publication in February 2020.

The Lancet letter of Feb 18, 2020, sent a message to scientists the world over: Investigate a lab leak, and you will be tarred as conspiracy theorist. Was it a honest outpouring of support? Or astroturfing? To start, of the 27 signatories, 7 were affiliated with EcoHealth… 🧵 pic.twitter.com/XTyTB3CeyD

It should be no surprise that several of the scientists have since changed their position, the report shows. Furthermore, several of the signatories are connected to EcoHealth, the controversial scientific group that funneled millions in U.S. taxpayer money to the Wuhan laboratory.

“The Lancet letter of Feb 18, 2020, sent a message to scientists the world over: Investigate a lab leak, and you will be tarred as conspiracy theorist,” Marinos wrote. “Was it a honest outpouring of support? Or astroturfing?”

“The fact that a quarter of the signatories were affiliated with EHA was hidden,” he noted.

Indeed, several of the names listed by Marinos are linked to blank profiles on the EcoHealth Alliance website, one of them scrubbed and leading to a 404 page (MacKenzie). William Karesh is found in an announcement that he was appointed to the Council of Foreign Relations.

Marinos continued by noting: “3 signatories worked directly for the Wellcome Trust: Sir Jeremy Farrar (Director, also instrumental in the Feb 1 meeting between Kristian Andersen, Eddie Holmes, Anthony Fauci, and others), Josie Golding (Epidemics Lead), Mike Turner (Director of Science). In addition Larry Madoff is the editor of ProMED, which receives “ongoing operational support” from Wellcome, Gerald Keusch reports having served in multiple committees for the Wellcome Trust. Leo Poon is in a leadership position in Hong Kong University, and given the situation on the ground, we wouldn’t expect him to be able to share any thoughts. Finally, Dennis Carroll and Jonna Mazet are in Leadership of the Global Virome Project, alongside Peter Daszak.”

“So far we’ve shown how 15 of the 27 signatories had major conflicts, considering how involved EcoHealth was with funding WIV, as was the Wellcome Trust,” Marinos notes. “To dare write ‘We declare no competing interests’ in the letter, was a mockery of science and taxpayers everywhere.”

“Of the remaining 12, 4 are close collaborators of Ralph Baric, and have stayed relatively quiet, especially since he signed on to a statement asking for an independent investigation: Linda Saif, Luis Enjuanes, Alexander Gorbalenya (Sasha), Bart Haagmans. As a reminder, Ralph Baric, one of the fathers of Gain-of-Function methods, was intending to sign, but was asked by Peter Daszak to refrain, as apparently did Linfa Wang, to prevent attention to their collaboration and ‘maximize an independent voice.'”

Marinos then produces a quite stunning email that lays out the connection between EcoHealth Alliance and the letter signatories. 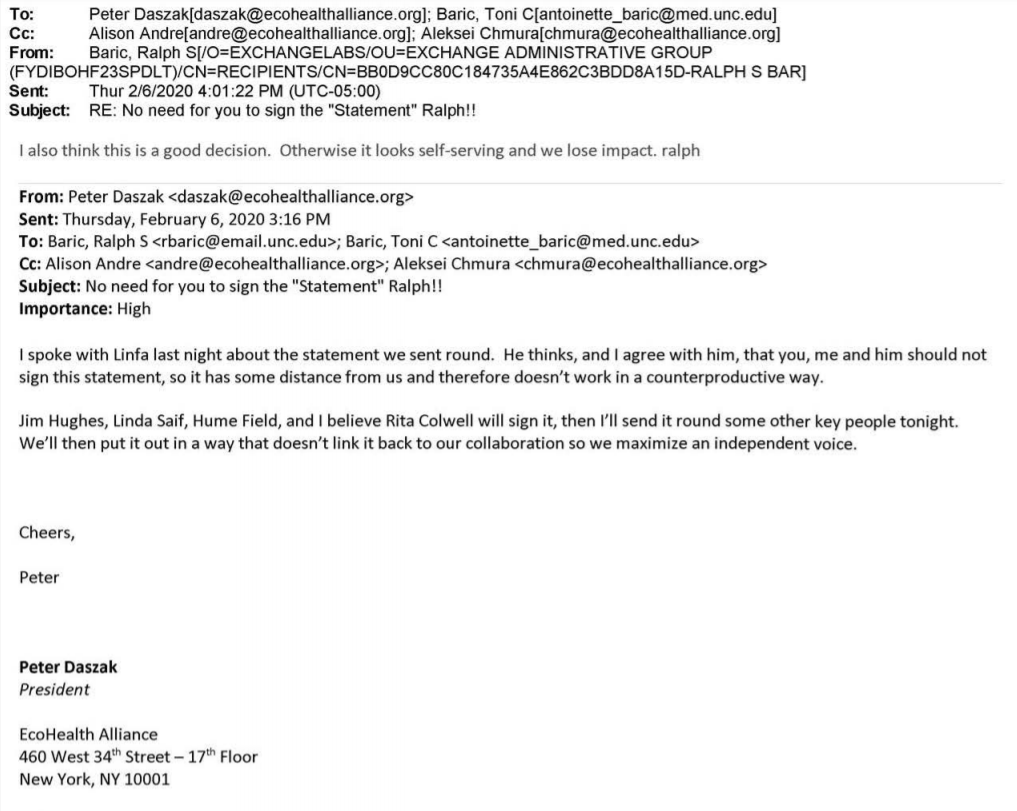 “And now for the interesting part: Of the remaining 8 who are relatively independent, 5 have modified or reversed their positions with regard to a lab leak,” Marinos adds. “Considering they started by signing a statement that called it a ‘conspiracy theory’, this is truly remarkable. We have: First author Charles Calisher considers the use of “conspiracy theory” to have been “over the top”. He now tells people he needs more information before he can opine,” Marinos notes, linking a March 2021 “Technology Review” article on the subject.

“Charles Calisher, an emeritus professor in the Department of Microbiology, Immunology, and Pathology at Colorado State University, is also listed as a coauthor,” the article states. “He says the conspiracy-theory phrase was, in his opinion, over the top. ‘Unfortunately for me, [Daszak] listed everyone alphabetically, and I was first,’ he says. With his phone constantly ringing, Calisher says, he told people he couldn’t say much until more information is available.”

“Christian Drosten considers a lab leak within the realm of possibility, though extremely unlikely,” Marinos points out. “He now has his own hypothesis, to do with serial passage through the fur farming practice. This is the first I’ve heard of this one, but this is why we need an open conversation.” 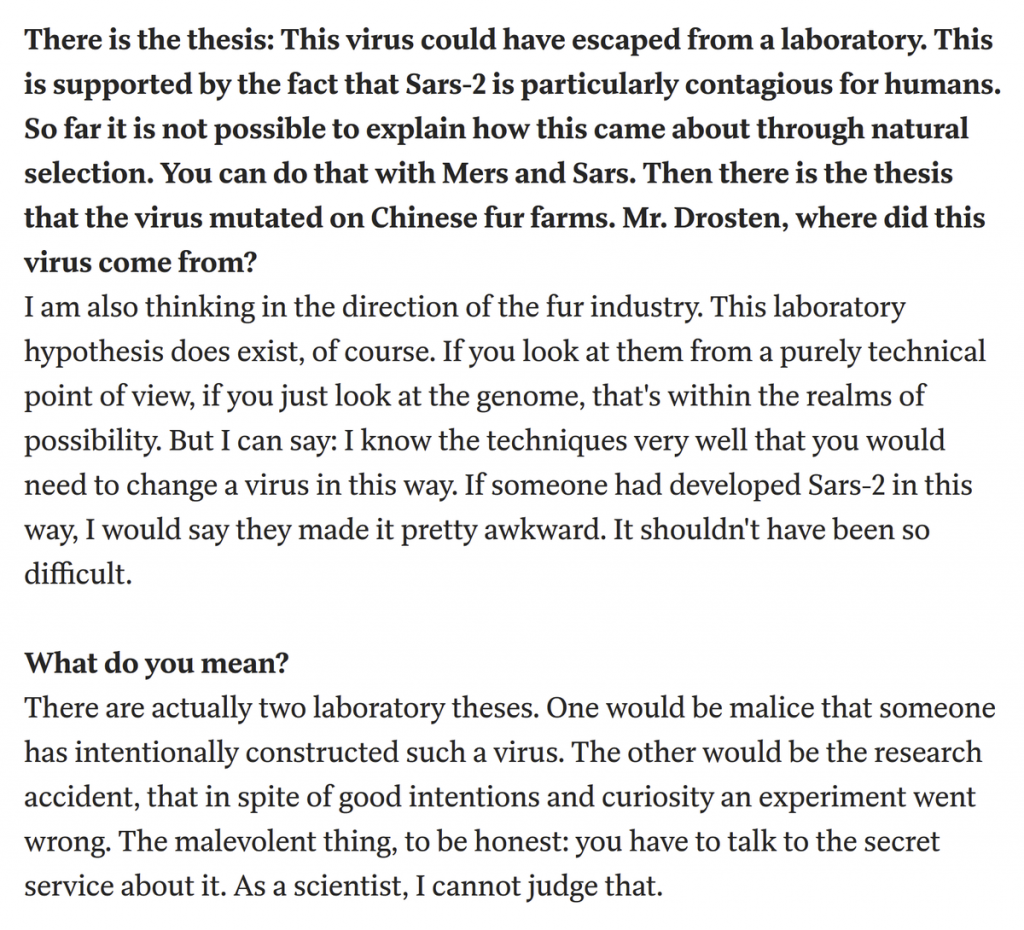 Drosten rightly states in the above-cited paragraph that one cannot ascertain intentions from merely looking at the virus, if it turns out that SARS-CoV-2 was constructed in a laboratory.

“The malevolent thing, to be honest: you have to talk to the secret service about it. As a scientist, I cannot judge that,” Drosten says.

“Stanley Perlman believes that the ‘lab leak’ is now ‘on the table’, due to our failure to find the intermediate host thus far,” the report continues, citing the above-mentioned “Technology Review” article.

“Stanley Perlman, a microbiologist and professor at the University of Iowa, in Iowa City, is listed as a coauthor of the statement,” the article underscores. “In an email to Undark, he wrote that the lab-leak idea ‘has several aspects, ranging from the statement that the virus was designed in a lab to ones that state the virus leaked from a laboratory but was not engineered’.”

“Peter Palese has gone a step further and is demanding a full investigation,” Marinos continues.

“Dr Peter Palese, a microbiologist at the Icahn School of Medicine at Mount Sinai in New York, signed the letter in the Lancet in February last year claiming the virus could only have been natural in origin and to suggest otherwise would create ‘fear, rumors, and prejudice,'” the Daily Mail reported.

“The ‘bullying’ letter, orchestrated by Dr Peter Daszak, the head of a non-profit that funnelled U.S. taxpayer dollars to the Wuhan Institute of Virology, was criticized by experts for ostracizing anyone offering different opinions on the virus’ origins, dismissing them as conspiracy theorists,” the Mail notes.

“Perhaps the longest distance of all has been crossed by Bernard Roizman,” Marinos comments. “He is now convinced ‘that the virus was brought to a lab … and some sloppy individual brought it out’.”

“They can’t admit they did something so stupid,” Roizman now says.

“Even Daszak now concedes he can’t disprove the lab leak hypothesis. This may sound obvious, or mundane, but the letter sang a different tune,” Marinos adds. However, Daszak won’t stop calling it a “conspiracy theory,” as the passage below illustrates: 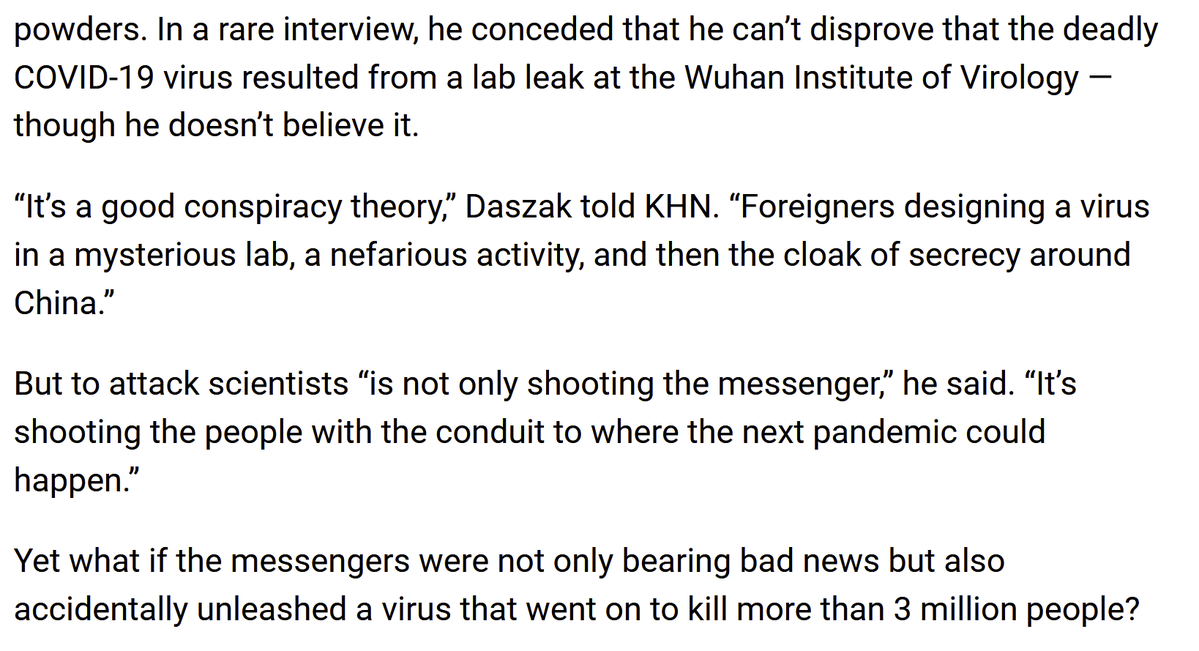 “It’s a good conspiracy theory,” Daszak told KHN. “Foreigners designing a virus in a mysterious lab, a nefarious activity, and then the cloak of secrecy around China.”

“But to attack scientists ‘is not only shooting the messenger’,” he said. “It’s shooting the people with the conduit to where the next pandemic could happen.”

Peter Daszak is engaging in classic public relations spin: Play the victim. Unmentioned, however, are the millions of victims who quite possibly were killed by a virus that escaped from a laboratory. And if Daszak sought to shut down investigation into a plausible line of inquiry, one has to wonder if the motives of his group’s scientific research are to seek the truth or something a lot less praiseworthy.

The Wuhan laboratory investigation is an outstanding case study on how the elites are abusing scientific authority to close off public accountability. Perhaps it will provide a lesson to the mainstream media about falling for the government’s public relations tactics.

But judging from the Big Tech censorship of public debate over the COVID-19 pandemic, as well as activist ‘reportage’ on the manmade climate change “consensus,” it will be in the hands of independent investigators and vigilant citizens to hold these institutions accountable.