The U.S. government entered into a secretive agreement with one of the major mRNA ‘vaccine’ manufacturers, Moderna, right as China began mobilizing in preparation for the forthcoming coronavirus pandemic.

The NIH and Moderna confidential agreement was formed only months prior to the COVID-19 pandemic sweeping the world in late October and December 2019. However, May 2019 would be a pivotal period in the genesis of the coronavirus in China, as this report will highlight below.

“In May 2019, NIH and Moderna entered into a ‘research collaboration agreement’ to develop vaccine candidates against Middle East Respiratory Syndrome coronavirus (MERS-CoV) and Nipah virus,” a Public Citizen investigation notes. “The project was focused on evaluating candidates in animal models. NIH signed an amendment to the document on January 13, 2020—the day the agency and Moderna finalized the design of their novel coronavirus vaccine. The amendment is significantly redacted and does not mention the new coronavirus. However, the close proximity suggests the terms of the contract may have been expanded to apply to this new project. At the very least, the terms may have been instructive for the mRNA-1273 project.”

The NIH-Moderna secret agreement was in close proximity to another event: China’s initial mobilizations for a coming coronavirus pandemic in May 2019.

“Purchases of PCR tests in China’s Hubei Province surged months before the first official reports of a novel coronavirus case there, according to a report by Australia-based cybersecurity company Internet 2.0,” Nikkei Asia reported. “About 67.4 million yuan ($10.5 million at current rates) was spent on PCR tests in Hubei during 2019, nearly double the 2018 total, with the upswing starting in May, according to the report.”

“The report casts further doubt on China’s official line about the origins of the virus, a topic that has fueled tensions between Beijing and Washington,” Nikkei Asia added. “China’s foreign ministry has disputed the report’s findings.”

However, the NIH and Moderna had been working together for at least four years on an mRNA drug for coronaviruses. It was only in May 2019 that the confidential agreement was entered into.

“The National Institutes of Health may own intellectual property that undergirds a leading coronavirus vaccine being developed by Moderna, according to documents obtained by Axios and an analysis from Public Citizen,” the June 2020 Axios report said.

“Why it matters: Because the federal government has an actual stake in this vaccine, it could try to make the vaccine a free or low-cost public good with wide distribution, if the product turns out to be safe and effective,” the report added.

Or the federal government could wield the so-called mRNA “vaccine” as a political instrument to further an agenda, while providing Big Pharma with a “liability shield” that isn’t merited under the law.

On Friday, radio host Glenn Beck discussed the documents and their ramifications:

The NIH-Moderna confidential agreements can be read below.

Nonetheless, the NIH and Moderna are squabbling over who actually owns the patent rights. The New York Times reported on the legal battle between the two entities in November 2021.

“Moderna and the National Institutes of Health are in a bitter dispute over who deserves credit for inventing the central component of the company’s powerful coronavirus vaccine, a conflict that has broad implications for the vaccine’s long-term distribution and billions of dollars in future profits,” the Times reported.

“The vaccine grew out of a four-year collaboration between Moderna and the N.I.H., the government’s biomedical research agency — a partnership that was widely hailed when the shot was found to be highly effective. A year ago this month, the government called it the ‘N.I.H.-Moderna Covid-19 vaccine’.”

The National Institute of Allergy and Infectious Diseases (NIAID), headed by Dr. Anthony Fauci, is an NIH division that provided the Wuhan Institute of Virology, where several experts believe the SARS-CoV-2 virus may have ‘escaped,’ with considerable funding through the “non-profit” group EcoHealth Alliance. The funding persisted throughout the Trump administration, which had banned the funding of “gain-of-function” research. 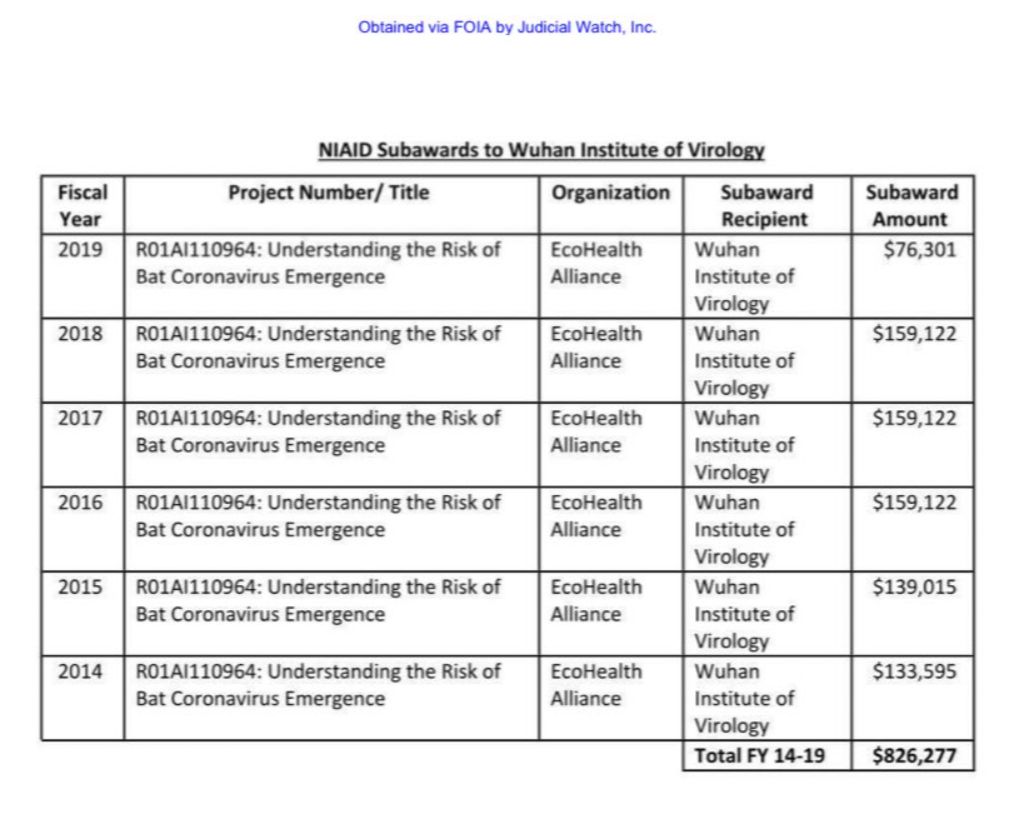 The U.S. funding of the Wuhan laboratory was accompanied by several defense agencies, including the Pentagon, as can be seen below: 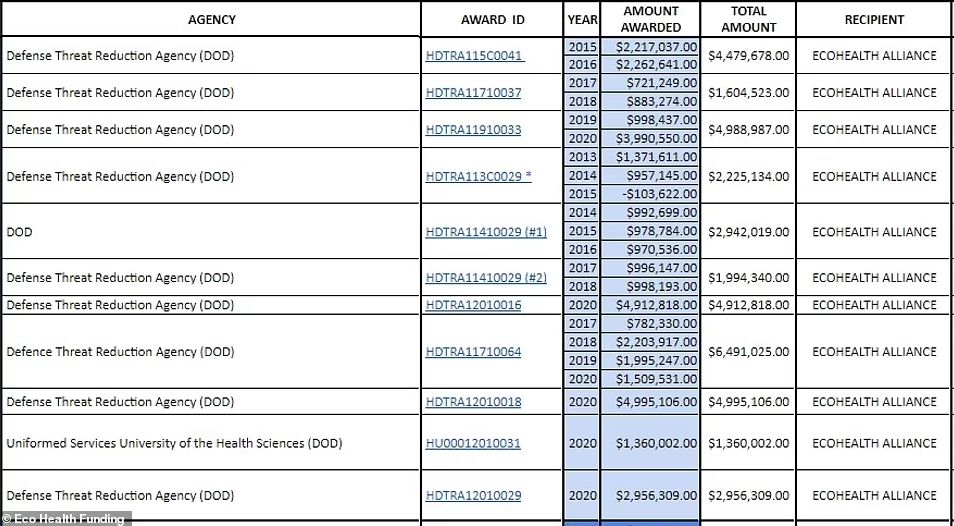 When reports began to surface that SARS-CoV-2 may have originated from the Wuhan laboratory, U.S. officials worked behind the scenes to quash such reports. The Lancet issued a now-infamous letter calling such scientists who backed the hypothesis “conspiracy theorists.” A number of scientists subsequently changed their statements to respect the thesis as more evidence arose corroborating the lab-leak theory.

The Public Citizen investigation discusses some of the ramifications of the U.S. government potentially owning one of the mRNA therapeutic drugs being labeled “vaccines.” (The CDC actually changed the definition of “vaccine” so that the mRNA prophylactic therapeutics would qualify.)

“The U.S. government may jointly own a potential COVID-19 vaccine,” the report notes. “At least two patent applications that appear essential to the vaccine name federal scientists as inventors, giving the U.S. government ownership if the patents are granted. Collaboration agreements also support the government’s ownership stake in mRNA-1273.”

“Co-ownership provides significant rights,” the report added. “For example, assuming there were no other monopolies, the government could make, use, or sell the technology without the consent of Moderna.[33] It could also license the technology to others, including other vaccine manufacturers or the World Health Organization, without the consent of Moderna.”

There you have it. The U.S. government has a documented, verifiable conflict-of-interest in issuing federal vaccine mandates. It has abused the law to violate the rights of U.S. citizens and has a non-legal stake ensuring that American citizens take the “vaccines.”

This would explain much of the federal government’s deception of the American people with the claim that the “vaccines” are “100% safe and effective,” even as the science continues to debunk its false claims on a daily basis.