Sen. Schumer Takes Gaslighting to Next Level: GOP ‘Making It Easier to Steal an Election’ 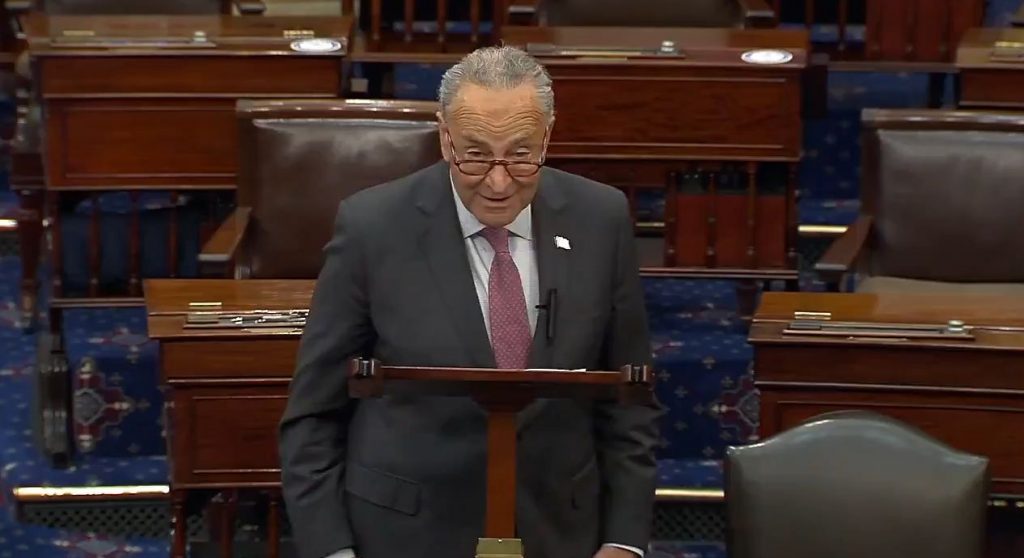 Senator Chuck Schumer gave a remarkable speech on Tuesday attempting to convince the American people that election integrity bills that would institute basic checks to validate votes actually are intended to ‘make it easier to steal an election.’

The Majority Leader actually made this incredible argument on the Senate floor, while feeling compelled to add, “I actually believe that.” Watch:

“In a democracy, no right is more sacred than the right to vote,” he argued. “And yet, across the country, Republican-controlled state legislatures are conducting the most sweeping and coordinated attack on voting rights in generations, fueled by Donald Trump’s insidious big lie that the election was stolen.”

“In several states, limits have been placed on voting hours, polling locations and methods of voting,” he continued. “Barriers have been raised to make voting by mail, absentee voting and after hours voting and early voting harder.”

“Stripping independent election officials of power, giving partisan election bodies more control, even firing members of county election boards — this is what Republican legislatures are doing,” he added. “Not for fairness, not for bipartisanship, but to jaundice elections. And if the consequence is Americans of all parties feel that the elections are not fair, what is going to happen to this sacred and wonderful democracy?”

Schumer’s remarks accompany a spate of hyperbole over state election laws and forensic investigations of the 2020 elections. President Biden went to Philadelphia, Pennsylvania on Tuesday and gave a speech comparing the fight against election reform bills that would institute basic safeguards to ensure free, fair and valid elections to the literal “Civil War.” That’s not “hyperbole,” he added.

The hysteria from the Democratic Party makes it clear that the Republican-controlled state legislatures are moving in the right direction. The Democratic Party members are signaling they view election measures that would return American democracy to the norm before the 2016 election as tantamount to a “Civil War.”

It is revealing in the worst possible sense. Only a party intent on actually ‘stealing’ elections would talk in such a hysterical manner, while fighting election verification measures tooth-and-nail.