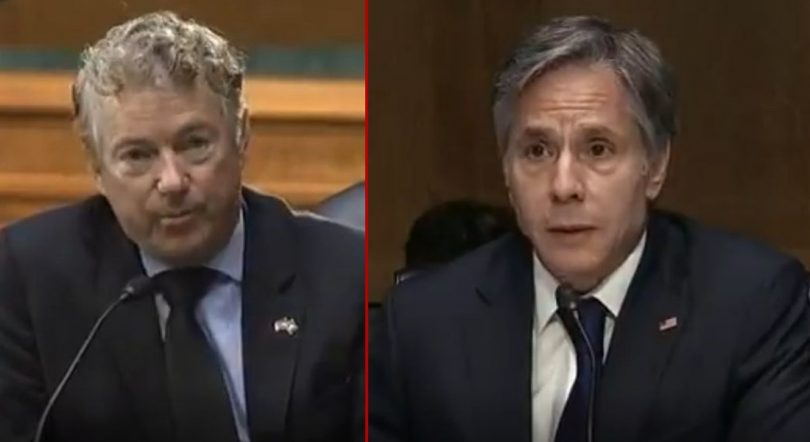 Senator Rand Paul scorched Secretary of State Antony Blinken at a Senate hearing on Tuesday for a drone strike that killed a U.S. Aid worker from Afghanistan and nine other civilians. The drone strike was carried out due to a faulty tip from the Taliban, Becker News can exclusively report.

The video exchange and the transcript of the confrontation follows below:

PAUL: “The guy the Biden administration droned, was he an aid worker or an ISIS-K operative?”

BLINKEN: “The administration is, of course, reviewing that strike. And I am sure that you know full assessment will be forthcoming.”

PAUL: “So you don‘t know if it was an aid worker or ISIS-K operative?”

BLINKEN: “I don’t know because we’re reviewing it.”

PAUL: “Well, see, you think you’d kind of know before you off somebody with a predator drone whether he‘s an aid worker or he’s an ISIS-K. See, the thing is, is this isn’t just you. This has been going on for administration after administration. The Obama administration drone hundreds and hundreds of people. And the thing is, is, there is blowback to that. I mean, I don’t know if it’s true but I see these pictures of these beautiful children that were killed in the attack. If that’s true and not propaganda, if that’s true, guess what? Maybe you‘ve created hundreds or thousands of new potential terrorists from bombing the wrong people. So you got to know, we can‘t sort of have an investigation after we kill people. We have an investigation before we kill people. We got plenty of bombs. We can bomb almost anything we want from anywhere in the world. Maybe we should have bombed the helicopters and the planes we left behind. Even though you said you didn‘t know any of this and it was all surprise, once they took our stuff, we should have said you have 20 minutes to get out of it because we are going to low it up. Then you would have sent the mesage of strength. Instead we bombed somebody who we are not sure if it‘s an aid worker or an ISIS-k operative.

“That‘s not sending a signal of strength. And in the end, there will be more blowback from it. If you killed an aid worker on accident, do you think we are better off because of that? You really could have acted from a position of strength but you could have made the basic decision, the basic, fundamental decision that really ruined the whole thing for you was a military decision to abandon Bagram Air Force base before you left, before the Americans were out. Anybody can argue, and you may have a point that it happened more quickly than we thought it was going to happen, OK, that’s an honest mistake.

“Still a huge mistake. And when people make judgment mistakes in the military, they ought to be relieved of their post. But leaving Bagram Air Force Base I think is an unforgivable sort of mistake. It‘s going to be remembered in history.”

“But if you do nothing about it, you leave all these people in place and say, ‘Well, we all agreed’ it’s like then maybe everybody needs to go. I mean — but really it was a terrible mistake. Releasing money to the Taliban will add insult to injury. It’ll be terrible for the memory of the 13 soldiers who died in the end, who were the final soldiers to die in this war. If you end up giving money to the people that have been ruining the Middle East and Afghanistan for decades. I hope you won‘t release the money and I think it’ll be a big mistake.”