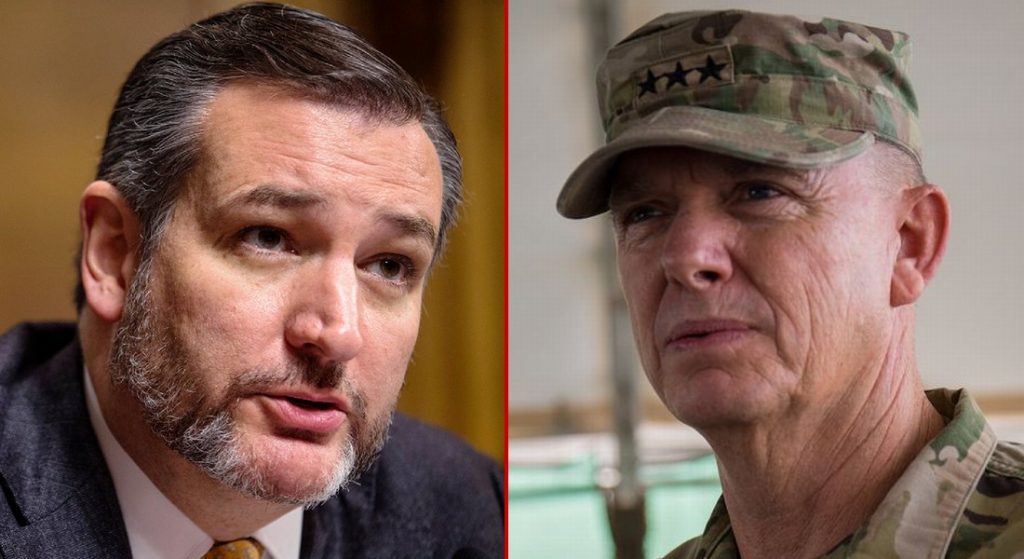 On Sunday, the Texas senator tweeted out what he is doing about the intolerable situation.

Under Biden, the military is launching political attacks to intimidate Tucker Carlson & other civilians who criticize their policy decisions.

Officials in uniform are being used for the campaign.

I've demanded a meeting with the Commandant of the USMC to put a stop to it. pic.twitter.com/Ihl8xRJr0S

“Under Biden, the military is launching political attacks to intimidate Tucker Carlson & other civilians who criticize their policy decisions,” Cruz tweeted. “Officials in uniform are being used for the campaign. I’ve demanded a meeting with the Commandant of the USMC to put a stop to it.”

Cruz also issued a formal letter, a portion of which is posted below.

“I am deeply troubled that the commitments you made, and the military’s broader obligation to avoid political endorsements and controversy, are being systematically undermined for the sake of leftwing ideology and political expediency. The last week has witnessed the Pentagon mobilize systematic, public attacks against television host Tucker Carlson that in substance, tone, and political resonance are inexplicably inappropriate.”

Sen. Cruz also highlighted the risks of a politicized military.

“This spectacle risks politicizing the military after several centuries of efforts to keep military officials out of domestic affairs, undermining civil-military relations by having the military take a side in a contentious cultural dispute, and the perception that military leaders are happily weaponizing the institution against political critics of the sitting administration. This kind of behavior, while perhaps typical in a military-controlled Third World country, is completely unacceptable in the United States of America.”

Sen. Cruz concluded by demanding a meeting and plan to prevent further mobilization against free speech.

“I therefore request that the Commandant of the Marine Corps meet with me, in person, to discuss these issues. I also request an official response from the department and implementation of a policy that insulates other units from being similarly mobilized against the speech of American citizens or in the service of left wing political causes.”

On Tuesday, Tucker Carlson rankled left-wing members of the U.S. military ranks after he slammed Biden for making a “mockery” of the service.

“So we’ve got new hairstyles and new maternity flight suits, pregnant women are going to fight our wars,” Carlson continued. “It’s a mockery of the U.S. military. While China’s military becomes more masculine as it assembles the world’s largest Navy, our military needs to become more feminine, whatever feminine means anymore because men and women no longer exist. The bottom line is it’s out of control. And the Pentagon’s going along with this. This is a mockery of the U.S. Military and its core mission which is winning wars.”

Several high-ranking military members argued with Tucker Carlson, a private citizen whose speech they are sworn to protect.

“This is me, yesterday, conducting a re-enlistment for one of the tens of thousands of women who serve in our Army,” Commanding General Patrick Donahue tweeted. “Just a reminder that Tucker Carlson couldnt be more wrong.”

“I agree Pat,” four-star Army general Paul Funk added.  “Thousands of women serve honorably every day around the globe. They are beacons of freedom and they prove Carlson wrong through determination and dedication. We are fortunate they serve with us.”

One of the U.S. Marines’ official Twitter accounts even joined in. Needless to say, this is all highly inappropriate and dangerous. The U.S. military is crossing the rubicon to target the left’s political enemies.

After the Department of Defense’s shameful behavior singling out unidentified “right-wing extremists” as a threat worthy of militarizing D.C. for months, while turning a blind eye to radical left Antifa-BLM agitators who have been rioting for months, the Pentagon needs more than a strongly worded letter.

If this inappropriate behavior in the U.S. military is allowed to escalate, it can literally ultimately lead to massive oppression and an unimaginable violation of Americans’ civil rights.