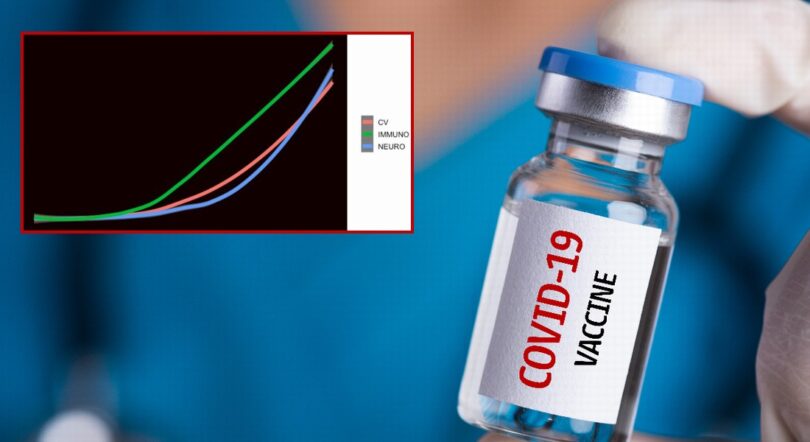 The Covid-19 vaccine* debate has been predicated on a number of demonstrable untruths since the very beginning. No bigger lie has been told to the American public than the vaccines are “safe and effective.”

This ceaseless “safe and effective” mantra has been told to millions of Americans by white labcoat-wearing ‘public health’ officials in countless ad campaigns, as if a page torn out of the Milgram experiment.

Since the quick demise of “15 days to slow the spread,” which we can dub the “father of all Covid lies,” the second part of the “safe and effective” marketing campaign for universal vaccination has crumbled into the dustbin of history. The efficacy of Covid vaccines has evaporated so rapidly that “boosters” are already being advised for all Americans.

Dr. Anthony Fauci hasn’t yet thrown in the towel on proclaiming those people who took the initial round of Covid jabs are no longer “fully vaccinated.” But his recent pronouncement that “we believe” that boosters “will likely” provide the highest level of protection yet gives otherwise healthy people enough pause to scratch that booster shot appointment off the calendar.

The ship of fools has sailed on the notion that vaccines ‘stop the spread.’ Despite the vapid promises of the septuagenarian simpleton at the helm of the country, the vaccines have been demonstrated to be a strong vector for the Delta variant. Prominent “fact-checkers” that normally carry water for the president even had to ding him on the myth that vaccines somehow ‘keep others safe.’

Nor do the vaccines even seem to appreciably slow Delta all that much. As Becker News reported in September, well ahead of the Covid curve, there was a developing trend of “more vaccines, more Covid.” As we have seen in sundry cases around the country since then, high vaccination rates do not translate to lower case rates: Vermont is the most vaccinated state in the nation at 68% ‘fully vaccinated’ (for now), but nonetheless is seeing a massive spike in coronavirus cases and hospitalizations. 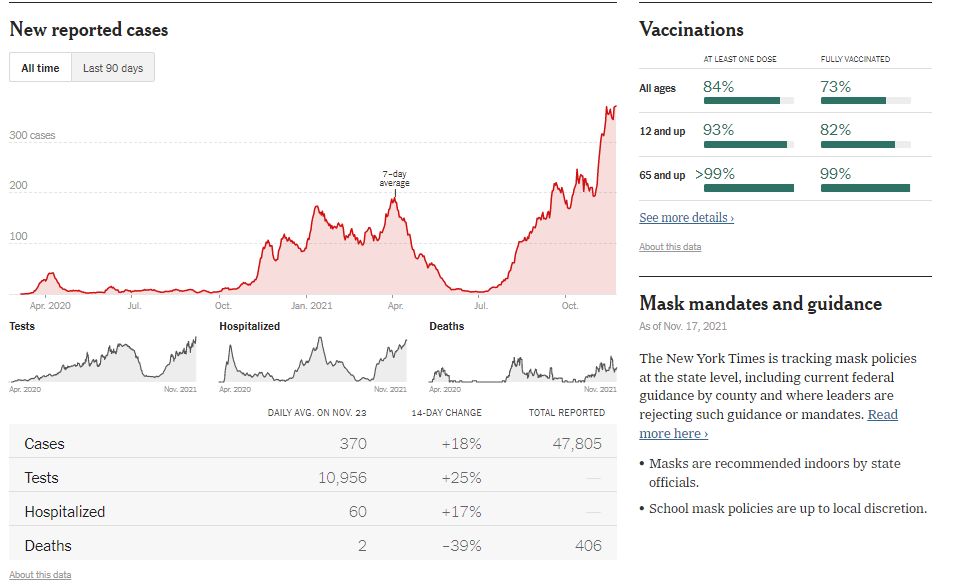 Now, that we’ve established that the vaccines are not as “effective” as was advertised, now comes the truly ugly part: There’s evidence that they are not nearly as “safe,” either.

There have been complaints before that the Vaccine Adverse Event Reporting System (VAERS) is underreporting Covid vaccine reactions, despite it being a “passive” system. Nonetheless, there have been nearly 670,000 adverse events reported after taking the Covid-19 vaccine, according to the VAERS website.

While the CDC and FDA give the impression that many of these side effects are ‘minor’ in nature – fever, headache, chills, fatigue, etc. – there is mounting cause for concern there are prevalent Covid vaccine Adverse Events (AEs) that are far more serious in nature.

Richard Baris, also known as the People’s Pundit, is currently one of the best pollsters in the country. I had the pleasure of appearing on a TPUSA Orlando panel with him on election integrity matters and can tell you he is the real deal. In fact, I suggest that you support his work to reform the corrupt polling industry in America by considering joining his Locals community.

Now, Baris was concerned by the noticeable disparity between the AEs reported in Pfizer’s documents (more on that below) and the VAERS website, and had taken it upon himself to start polling Americans directly about their vaccine experiences. He went above and beyond the critical threshold needed for a representative sample of national significance by polling 2,414 registered voters across the country. Furthermore, he drilled down enough to check all the boxes on represenative subgroups. This gives his results a sound 95% confidence interval in terms of their representative value.

The national polling on the Covid vaccine adverse events was reported by Ace of Spades (who leads off by weighing in on the surprising generic ballot results).

The extrapolated data would project out at a national scale to around 9.4 million “serious” adverse events, which alone dwarf the VAERS reports by 14 times over. But if you take all of the events together, a whopping 63% of Americans who take the vaccines have some kind of adverse event. Since there are 194 million Americans who are reportedly “fully vaccinated,” or nearly 60% of the population, there is no way to square the VAERS reports and the monumental scale of AEs that are communicated by this trustworthy and reliable polling.

It’s not just pollsters who are sounding the alarm on serious Covid vaccine events: Cardiologists are reporting a huge spike in heart inflammation cases to the American Heart Association (AHA).

A cardiac surgeon has circulated a warning to the AHA that heart inflammation markers are drastically increasing in patients in conjunction with increasing mRNA Covid vaccination rates. 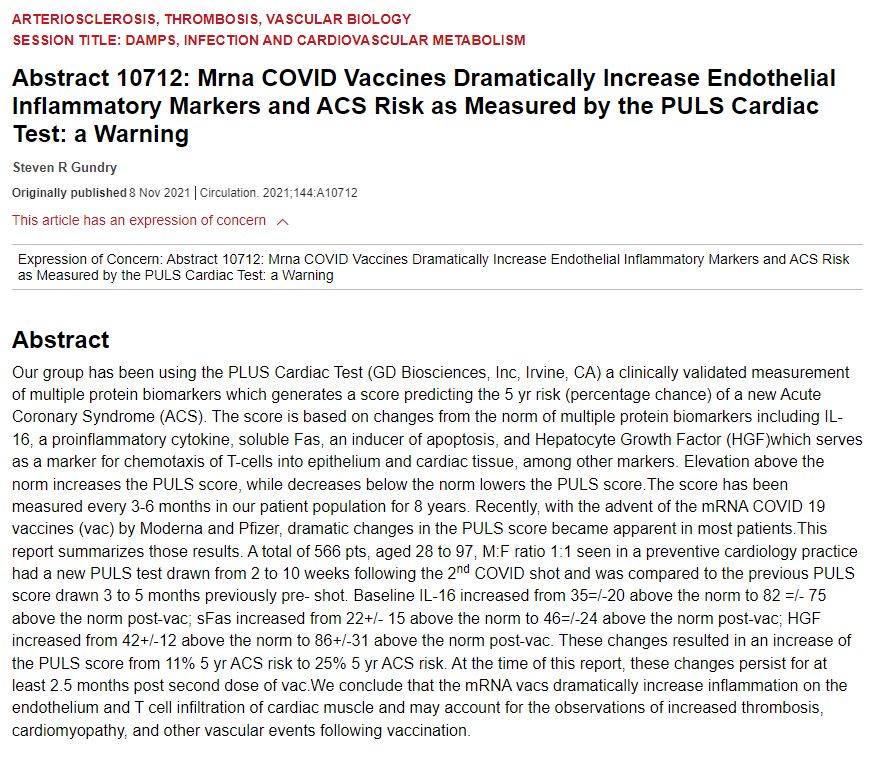 “Recently, with the advent of the mRNA COVID 19 vaccines (vac) by Moderna and Pfizer, dramatic changes in the PULS score became apparent in most patients. This report summarizes those results,” Dr. Guidy wrote, adding, “We conclude that the mRNA [vaccines] dramatically increase inflammation on the endothelium & T cell infiltration of cardiac muscle and may account for the observations of increased thrombosis, cardiomyopathy & other vascular events following vaccination.”

“You cannot get any paper published that is anti-vaccine nowadays,” he added. “Academics will ONLY believe what is peer reviewed. So the vaccines are safe because there are no papers saying it isn’t, even though the data shows it isn’t. BUT NOBODY LOOKS AT THE DATA anymore.”

An interview with Aga Wilson of News Voice gave a fuller presentation of Dr. Rose’s views.

“Dr. Jessica Rose, who is normally positive about vaccines, says that VAERS (Vaccine Adverse Event Reporting System), the US database for vaccine injuries, has only managed to collect an estimated 1% of the total number of serious side effects from mRNA injections,’ NewsVoice reported. “VAERS is, unfortunately, a weak system when it comes to how side effect data is handled, says Rose. She, therefore, divided adverse reactions and side effects into several categories such as neurology, immunology, reproductive organs, and cardiovascular. In this way, she has created a warning system where it should be easier to see if and in that case how side effects can be linked to the mRNA vaccines.”

“Rose says that the so-called ‘covid vaccines’ are not actual vaccines but rather injections of genetic material,” the report added. “Several studies have been published, despite attempts to censor these, which show that the spike proteins themselves are very toxic to the body. These spike proteins are foreign proteins.”

“The fact that millions of people have been injected with these so-called ‘mRNA vaccines’ is to be considered a crime against humanity, Dr. Jessica Rose believes.”

Dr. Rose reports on the adverse events reportage following injection. Of interest, around day 7 there is a significant spike in post-injection adverse events reportage that gets missed because the FDA and CDC refuse to acknowledge that someone is vaccinated until 2 weeks following injection. This is a “donut hole” in the vaccination side effects reportage. It is reviewed 23 minutes into this video.

Dr. Rose also provides analysis of the Adverse Events being reported by VAERS in a (slightly dated) September 2021 document. 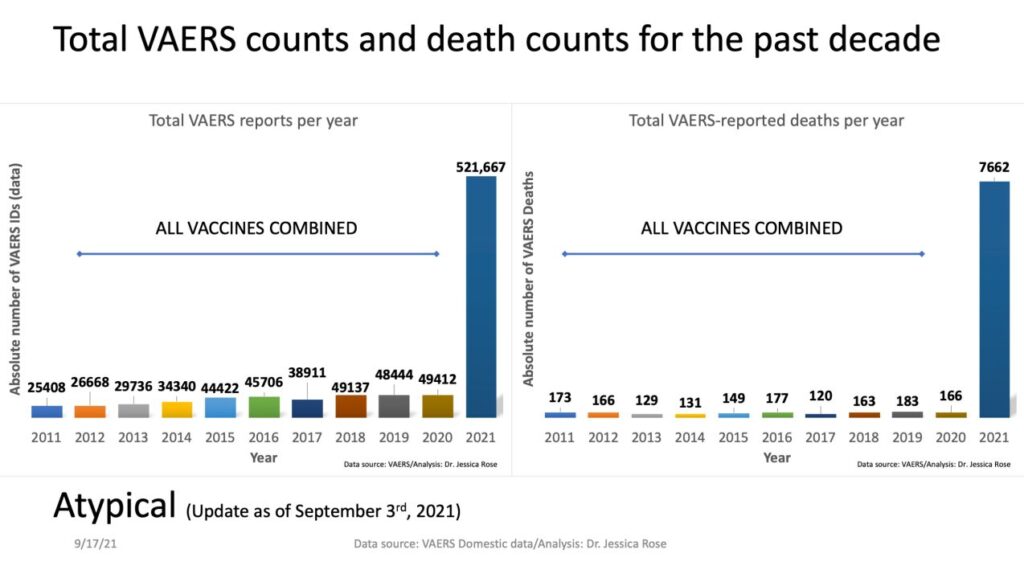 Dr. Rose notes that the 1108% increase in VAERS reports is not explained by excess vaccine doses. Here she breaks down the AEs by major categories: Cardiovascular, neurological, and immunological. 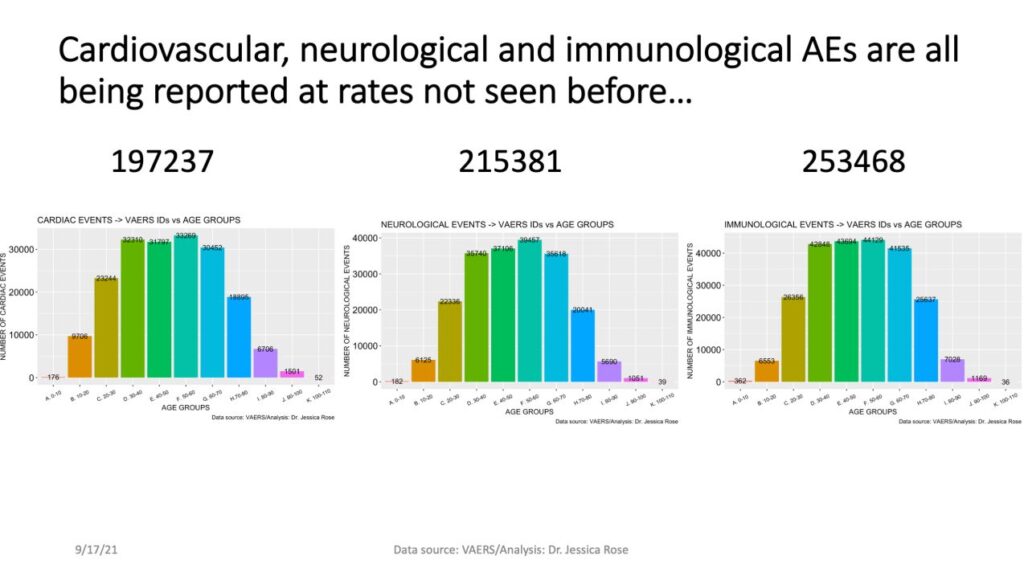 She charts the cumulative changes in the respective metrics below: 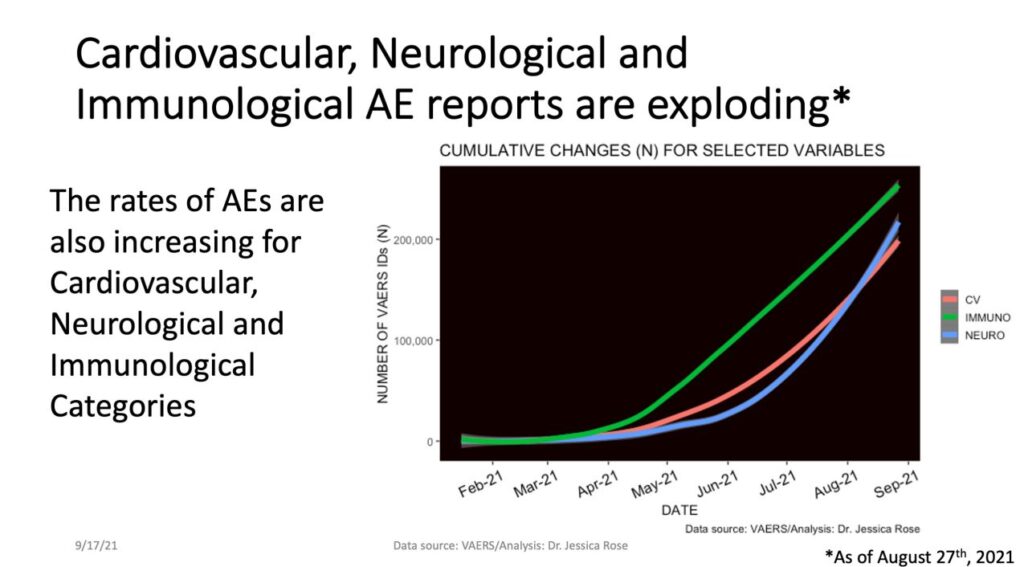 In the analysis provided with Steve Kirsch, Dr. Rose attempts to scale out and estimate the “true” Adverse Events cases. 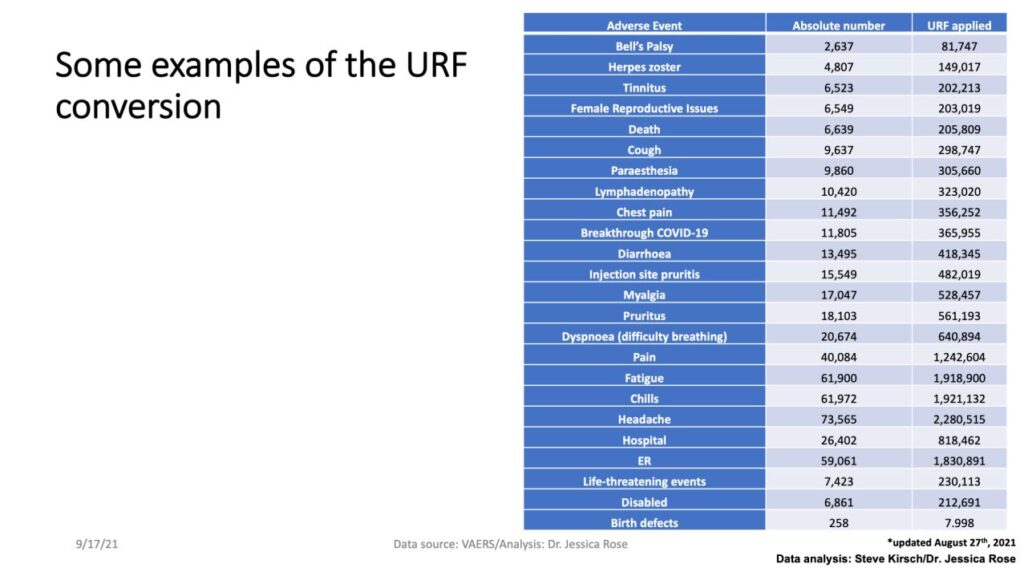 It is important to note that Pfizer’s documents reveal that there should be far more Adverse Events than are being officially reported; however, we cannot say how much more, because Pfizer is redacting its documents that were used for the Emergency Use Authorization by the FDA.

As Becker News reported earlier, Food and Drug Administration has provided its first batch of ‘confidential’ documents, in accordance with a FOIA lawsuit by the Public Health and Medical Professionals for Transparency. The redacted documents were the basis of the FDA’s Emergency Use Authorization of the Pfizer-BioNTech “vaccine*,” and subsequent federal vaccine mandates.

The FDA does not intend to fully release Pfizer’s clinical trials information used to justify its authorization of the ‘vaccine’ for 55 years.  Two months after the lawsuit was filed, the FDA produced the first 91 pages of the “more than 329,000 pages potentially responsive to Plaintiff’s FOIA request.” The findings, taken directly from the produced documents, are cited below. It shows that AEs are much more in line with the critics’ estimation than with the public record. 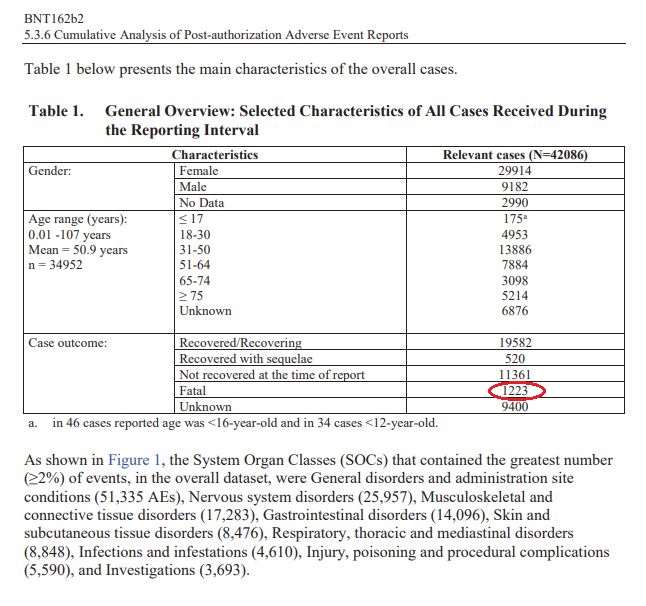 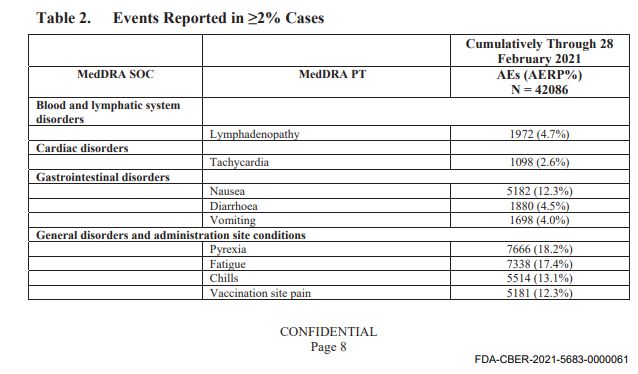 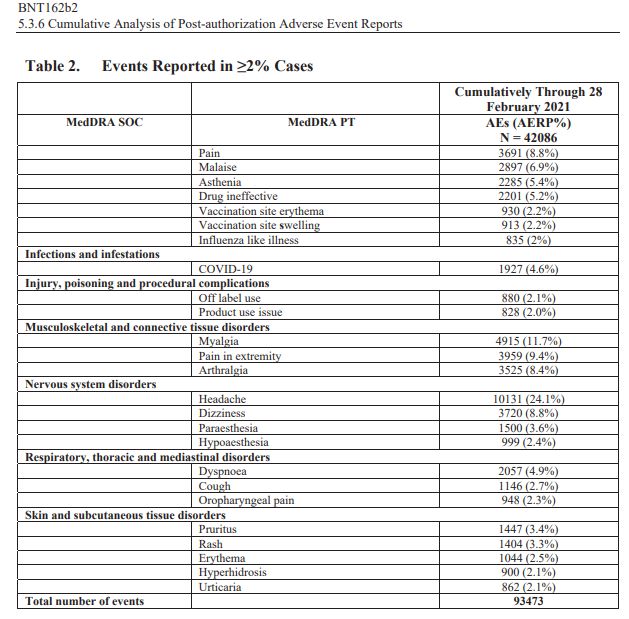 Substack author Aaron Siri points to remarks that Pfizer itself made about “large numbers of spontaneous adverse event reports.”

The fact that Pfizer was granted complete immunity from liability with its fraudulent “full authorization” should signal to policy makers and American voters that the entire universal vaccination agenda is fatally flawed.

Since the case is building that vaccines are neither safe, nor effective, and it should be added, do not stop the spread, the vaccine mandates need to stop immediately.

Dr. Fauci is Coming After Your Babies and Toddlers Next with Covid Vaccine Needle in Hand