Sheriff Mike Chapman told the beleaguered Loudoun County school board to shove its extreme security request, rhetorically speaking.  The sheriff’s retort to the radical school board came to light in emails that were made public on Thursday.

The Loudoun school board has become notorious nationwide for its Woke politics and its strong-arming of parents on such hot button issues as Critical Race Theory. The school board even had a parent arrested in June for arguing against the CRT curriculum.

In August, the radical educators sought to frame parents as potential ‘domestic terrorists‘ by sending the county sheriff Mike Chapman a laundry list of extereme security measures it purported were necessary to protect them from angry parents. 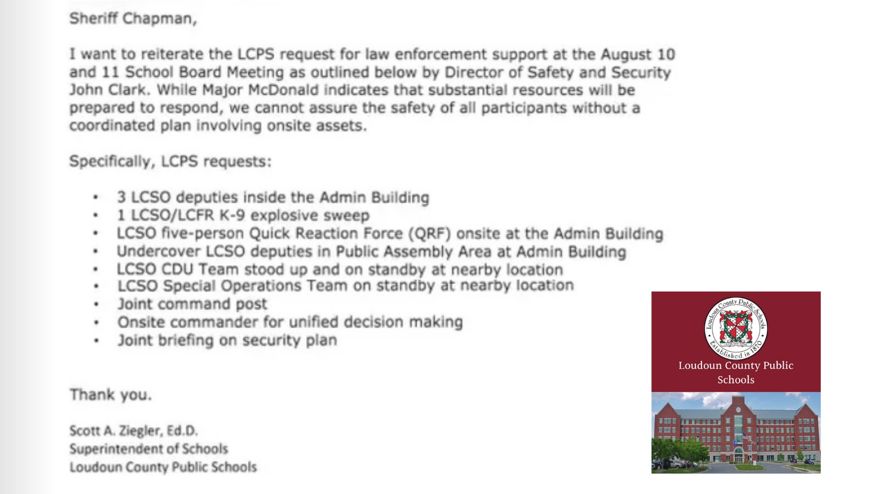 “Sheriff Chapman,” the Superintendant of Schools, Scott A. Ziegler, wrote. “I want to reiterate the LCPS request for law enforcement support at the August 10 and 11 School Board Meeting as outlined below by Director of Safety and Security John Clark. While Major McDonald indicates that substantial resources will be prepared to respond, we cannot assure the safety of all participants without a coordinated plan involving onsite assets.”

Then he listed the following security resources that were purportedly needed to defend the school board from concerned parents:

Ziegler tried to put the sheriff at his beck-and-call, but it backfired spectacularly. The sheriff’s response to the school board can be read in the letter below:

“Sheriff Chapman offered this summary of the LCSO plan for August 10 and 11,” the document states, per Kevin L. Lewis, the Chief Operations Officer of the Department of Support Services:

“During the conversation, Sheriff Chapman made a number of points as justification and/or rationale for their decision to not provide the requested support for the meeting. I have provided bulleted paraphrased statements which occurred randomly throughout the conversation”:

The sheriff then summarily rejected the Loudoun County school board’s “extraordinary” security request. The infamous school board meeting on June 22 that Sheriff Chapman refers to is one where a parent was arrested and removed from a meeting, per the request of the school board.

The school board was unwilling to take the heat over the potential curriculum inclusion of CRT.

When former Virginia state senator Dick Black spoke out, the school board threatened to end public comment. When the board ended public comment, the crowd burst into a patriotic display to shame the radical board members.

The Loudoun County sheriff’s office declared the school board meeting an unlawful assembly. Everyone told to get out or will be trespassing. Two arrests made #CriticalRaceTheory pic.twitter.com/23Cojtczvy

The school board then declared an “unlawful assembly” and two of the parents were arrested by police.

NEW: The tensions in #loudouncounty, on full display at last night's board meeting, echo a larger battle playing out across the US over how public schools are addressing the topic of racism with students. More on that w/@jamesoliphant @Reuters https://t.co/Aq3lrIn5Uk

“The tensions in [Loudon County were] on full display at last night’s board meeting, echo a larger battle playing out across the US over how public schools are addressing the topic of racism with students,” Borter noted.

Tensions between parents and the Loudoun County school board are now reaching a boiling point due to an explosive report that a sexual assault was covered up due to the administrative staff’s concern over the bad optics for transgender politics.

“In the email, Ziegler alerted the board to a report of an alleged sexual assault in a girls’ restroom on May 28, about a month before he publicly declared that he had no record of restroom assaults,” the report noted.

“The parents claimed that Ziegler and the school board covered up — while the board was considering a controversial transgender rule — the report that a male student in a skirt allegedly assaulted a female student in a girls’ bathroom,” the report added. “Prosecutors confirmed that the same young man who stands accused in that May incident also stands accused of sexual assault in an October incident in another school.”

Everything Woke turns to shit. Loudoun County parents have figured that out and now the local school board is going to have to deal with the consequences. No one trusts the school board anymore – beginning with the local sheriff.