In the latest installment of the Twitter Files, California Congressman Adam Schiff was exposed for pressuring Twitter to ban an investigative journalist who had reported on the identity of the “whistleblower” behind the first Trump impeachment hearings.

Matt Taibbi reported that lawmakers flooded Twitter with requests to ban American citizens whose reportage and commentary were ‘problematic,’ typically by including spurious excuses, such as they were promoting “Russian disinformation” or were part of the vague conspiracy theory group referred to as “QAnon.”

“They also received an astonishing variety of requests from officials asking for individuals they didn’t like to be banned. Here, the office for Democrat and House Intel Committee chief Adam Schiff asks Twitter to ban journalist Paul Sperry,” Taibbi reported.

The request from Schiff’s office in November 2020 was to “Remove any and all content about Mr. [Sean] Misko and other Committee staff from its service.” This request was met with the Twitter response: “no this isn’t feasible/we don’t do this.” 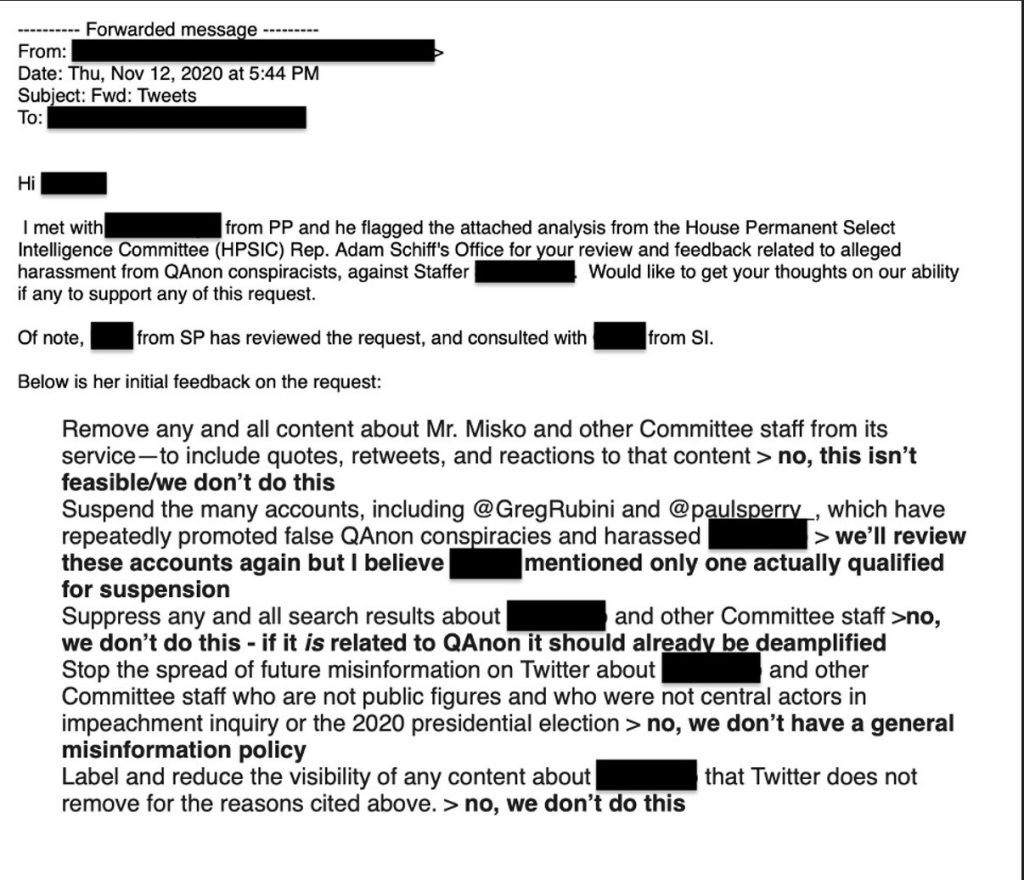 Schiff’s office asked to “suspend” many accounts, including @GregRubini and @paysperry_,” for pushing what Schiff’s office referred to as “false QAnon conspiracies.” Twitter responded that it will “review” the accounts again, but that “only one actually qualified for suspension.”

But there is a much deeper backstory behind Schiff’s request. Sperry had actually named the alleged “whistleblower.”  In his January 2020 article on the “whistleblower” behind the first Trump impeachment, Sperry said then-CIA analyst Eric Ciaramella was overheard talking with Sean Misko, a holdover staffer from the Obama administration.

A former official who had reportedly overheard the conversation reportedly remarked: “Just days after [Trump] was sworn in they were already trying to get rid of him.”

Sperry had earlier authored a story on the identity of the alleged “whistleblower” behind Trump’s first impeachment. As Sperry put it in the October 2019 story:

RealClearInvestigations is disclosing the name because of the public’s interest in learning details of an effort to remove a sitting president from office. Further, the official’s status as a “whistleblower” is complicated by his being a hearsay reporter of accusations against the president, one who has “some indicia of an arguable political bias … in favor of a rival political candidate” — as the Intelligence Community Inspector General phrased it circumspectly in originally fielding his complaint.

Federal documents reveal that the 33-year-old Ciaramella, a registered Democrat held over from the Obama White House, previously worked with former Vice President Joe Biden and former CIA Director John Brennan, a vocal critic of Trump who helped initiate the Russia “collusion” investigation of the Trump campaign during the 2016 election.

Sperry was banned in August 2022 after his tweet on the FBI’s raid on Mar-a-Lago.

“They kicked me off [Twitter] the day after Trump’s home was raided, and I was in the middle of tweeting more about the raid and I got a message popping up saying I was permanently suspended,” Sperry told BlazeMedia host Glenn Beck. “No reasons were given. They didn’t say what rules or policies I had allegedly violated to prompt that, so they canceled my account without any explanation, which is, by the way, a violation of their own rules.”

“If you look it up, they’re supposed to ‘explain which policy you may have violated’ and which content was in violation, and they did not do that in my case because they know I didn’t violate any rules,” Sperry added.

In the interview, Sperry noted that Twitter’s general counsel was a former high-ranking FBI official.

“The deputy general counsel is Comey’s general counsel at FBI headquarters, James Baker,” Sperry said. “He was disgraced after the FISA warrant abuse scandal, he left and Twitter picked him up, and now he is I’m sure screening any content-based matters that may have legal issues. Something like that would be run up to him, so he has a lot of influence at Twitter.”

“It’s getting crazy out there,” Sperry also said. “It has also gotten very personal between the former president and the FBI, this is like a full-blown war between the ex-president of the United States and the federal police — I mean, when has that ever happened?”

How is a Congressional leader demanding the banning of a veteran journalist from the nation's digital town square not state censorship?

“How is a Congressional leader demanding the banning of a veteran journalist from the nation’s digital town square not state censorship?” Sperry asked.

The simple answer: It is state censorship. It is a blatant violation of the U.S. Constitution and the Congressman’s Oath of Office.

Elon Musk even got into a heated exchange with Adam Schiff after the Congressman complained about recent bans on journalists who purportedly violated rules against ‘doxxing.’

“Elon Musk calls himself a free speech absolutist, to justify turning a blind eye to hatred and bigotry on Twitter,” Schiff claimed. “But when journalists report unfavorable news, they are banned without warning. The devotion to free speech is apparently not that absolute. But the hypocrisy is.”

“Thankfully, you lose your chairmanship very soon,” Musk retorted. “Your brain is too small.”