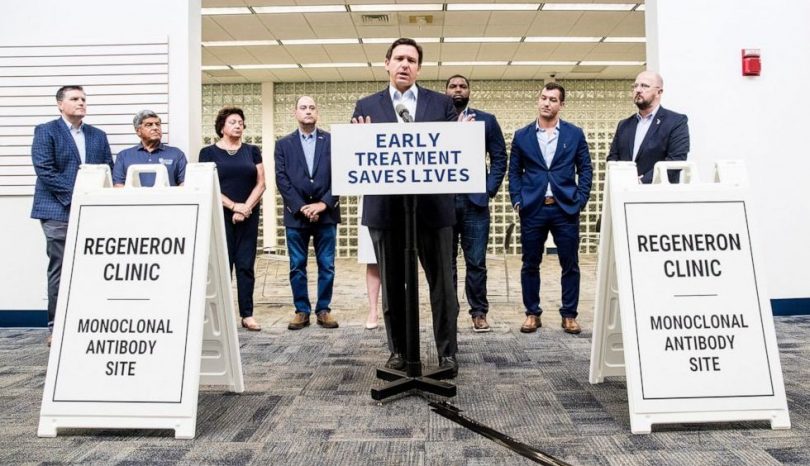 The Biden administration, under the pretenses of showing equity to all U.S. states, is effectively blocking majority red states from using more than its ‘fair share’ of monoclonal antibody (MA) treatment. The MA treatment, shown to be effective as a therapeutic fighting Covid, has been used in states such as Florida, Texas, Alabama, Mississippi, Georgia, and Louisiana to lower its hospitalization rates.

The U.S. Department of Health & Human Services, under the auspices of a “Public Health Emergency,” issued a fact sheet on the updated allocation of monoclonal antibody treatments.

“The increased incidence of the Delta variant of SARS-CoV-2 caused a substantial surge in the utilization of monoclonal antibody (mAb) drugs, particularly in areas of the country with low vaccination rates. HHS is committed to helping ensure consistent availability of these critical drugs for current and future patients in all geographic areas of the country. As such, we updated the distribution process for mAbs to assure fairness and efficiency,” HHS said.

“The updated process is a state/territory-coordinated distribution system similar to that used to distribute mAb product from November 2020 – February 2021. HHS firmly believes a state and territory-coordinated distribution system will help maintain equitable distribution, both geographically and temporally, across the country – providing states and territories with consistent, fairly-distributed supply over the coming weeks,” HHS continued.

“Under this system, HHS determines the weekly amount of mAb product available to each state and territory,” the U.S. agency went on. “Subsequently, state and territorial health departments then determine which sites in their jurisdictions receive product and how much.”

This is, effectively, health ‘communism.’ It is not respecting the market-based system of therapeutics, which is guided by supply and demand. If blue states are not utilizing monoclonal antibody treatments, then HHS should not be artificially allocating the treatments to them by disregarding patient demand.

A spokesperson for American Commitment explained that the Biden administration has thus far failed in its commitment to increase supply of the treatment.

"Tonight, I’m announcing we will increase the average pace of shipment across the country of free monoclonal antibody treatments by another 50 percent."

Less than a week later he CUT allocations to southern states by 50%. pic.twitter.com/TCTY7XdboC

“Tonight, I’m announcing we will increase the average pace of shipment across the country of free monoclonal antibody treatments by another 50 percent,” Biden announced on September 9th.

A DeSantis aide tells me HHS hasn't explained the cut:

"They had a vague statement about 'equity' but sorry that doesn’t cut it. No explanation of how the allocation was determined. No explanation of why it’s only Florida and a few other red states being restricted. No warning" https://t.co/3avIdovceA

“They had a vague statement about ‘equity’ but sorry that doesn’t cut it,” Melanchthon Wegmann reported. “No explanation of how the allocation was determined. No explanation of why it’s only Florida and a few other red states being restricted. No warning.”

Florida Governor Ron DeSantis was mocked and scolded for advocating monoclonal antibody treatments, such as Regeneron’s, as recently as a few months ago. Apparently, the left is no longer laughing and is apparently concerned that it actually works.

“Today, we learn from the Washington Post that, actually, none of that was the problem,” Charles Cooke wrote. “Instead, DeSantis’s sin is that he has been relying upon monoclonal-antibody treatment too much, and that this is unfair to other states that now need it.”

There may be a workaround to the artificial MA bottlenecking, however, as was reported by PJ Media’s Stacey Lennox.

“Luckily, COVID-19 super sleuth Phil Kerpen found a workaround for concerned states,” Lennox writes. “GlaxoSmithKline (GSK) also makes monoclonal antibodies. Sotroimab is available under an EUA and recommended by the NIH for the Delta variant. According to Kerpen, GSK’s product is not on a federal purchase order. He suggests states use COVID-19 relief funds to make bulk purchases directly from GSK since HHS is not controlling the distribution of Sotroimab.”

Lennox also raises a point that suggests the Biden administration may have perverse incentives to deny therapeutics in states with lower vaccination rates.

“That the federal government failed to prepare with the only recommended treatment in sufficient quantities is inexcusable,” she opines. “That HHS is cutting supplies in hard-hit states is unconscionable. At some point, it is legitimate to ask if the fear and suffering created by COVID-19 is a problem they really want to solve.”

If the Democrats would stop politically capitalizing on ‘crises,’ such as using the pandemic as a rationale for mass mail-in ballots during elections, then their motives would be less open to question. Since the Biden administration is both effectively punishing red states and simultaneously failing in its commitments leads to valid questioning if it truly wants the pandemic to end.

There is a simply way for the Biden administration to respond to such criticism: Increase the supply of monoclonal antibodies, as it promised, and let patient demand determine how it is allocated.