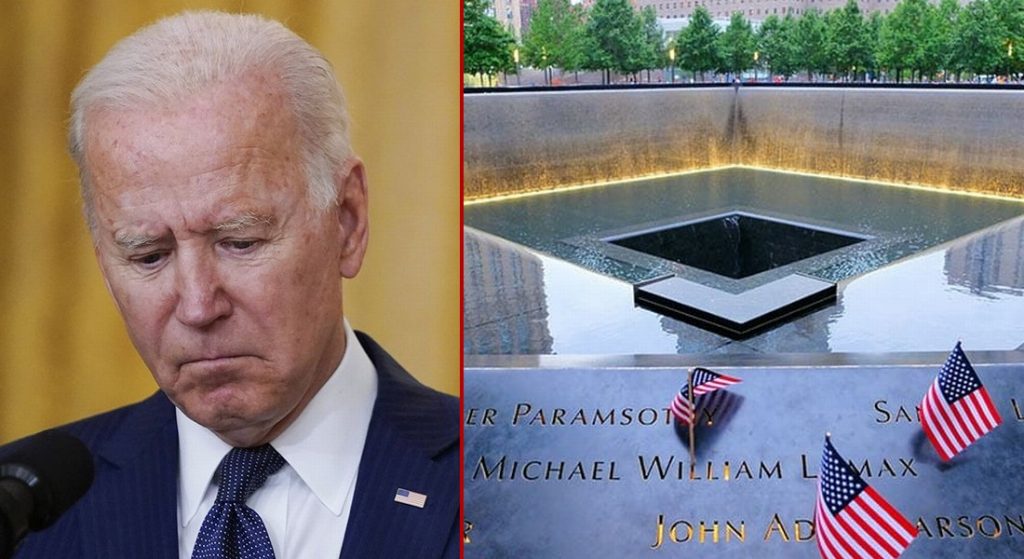 The son of a victim of the 9/11 attacks told Fox & Friends on Monday that President Biden is not welcome at the 20th anniversary memorial service scheduled for Saturday.

Nic Haros Jr.’s mother Frances was killed in the biggest terror attack on U.S. soil. He told the network that “shameful” Biden should “not show his face at Ground Zero on 9/11.” He added that the president has “no place there” and he left “thousands of Americans and Afghan supporters” in Afghanistan “to die.”

“I am demanding that President Biden do not show his face at Ground Zero on 9/11. It is now holy ground and I really don’t think he has a place there,” Haros said.

“It’s shameful for him, I think, to use the dead bodies as a political prop for his so-called victory lap. He is insensitive and he shows no compassion to the families. No Joe, no victory, we are now in the Afghanistan War 2.0,” Haros added.

“Those resurrected victims kept America safe from harm all those years. Biden must not dishonor their grace and patriotism. He has none,” Haros continued.

On Wednesday, the CEO of the largest 9/11 victims charity criticized President Biden’s mishandling of the U.S. military withdrawal from Afghanistan on John Solomon’s podcast.

“[T]hose families that are left behind — the Taliban and ISIS are going to slaughter them … and any American [who] thinks that they’re not is naive,” said Frank Siller, Chairman and CEO of the Tunnel to Towers Foundation. “So I pray for those families. We should have made sure that they got out here safely.”

Hundreds of slain 9/11 victims are also demanding that President Biden fulfill his pledge and release the full unredacted conclusions of the government’s investigation into the attacks.

“We cannot in good faith, and with veneration to those lost, sick, and injured, welcome the president to our hallowed grounds until he fulfills his commitment,” the families wrote in a statement in August.

“Since the conclusion of the 9/11 Commission in 2004 much investigative evidence has been uncovered implicating Saudi government officials in supporting the attacks,” they added. “Through multiple administrations, the Department of Justice and the FBI have actively sought to keep this information secret and prevent the American people from learning the full truth about the 9/11 attacks.”

“Twenty years later, there is simply no reason — unmerited claims of ‘national security’ or otherwise — to keep this information secret,” the group continued. “But if President Biden reneges on his commitment and sides with the Saudi government, we would be compelled to publicly stand in objection to any participation by his administration in any memorial ceremony of 9/11.”

Meanwhile, the Taliban is set to inaugurate its government on the 20th anniversary of 9/11. The Islamic terrorist regime has given four former Gitmo detainees roles in the fledgling government. The terrorists were traded for deserter Bowe Berghdal by former President Obama.

The 9/11 families’ disdain for President Obama extends to that recently shown by Gold Star families. They expressed disbelief about Biden checking his watch multiple times during the dignified transfer of slain U.S. soldiers returning home from Afghanistan in early September.