Southwest Airlines has become the latest major U.S. airline to mandate that employees receive the Covid-19 vaccination or lose their jobs. The airline is immediately suffering the consequences due to a reported mass ‘sickout’ that is causing severe delays and hundreds of flight cancellations.

“The Dallas-based company said its workers must be fully vaccinated by Dec. 8 in order to remain at the airline. Employees can seek approval to skip the shots due to medical or religious reasons,” KDVR reported.

“Southwest Airlines is suffering an operational meltdown this weekend as hundreds upon hundreds of flights have been delayed or canceled outright,” the Points Guy reported.  “The airline is blaming weather and an air traffic control issue from Friday for the domino effect of cancellations.”

“Thousands of passengers have been stranded at airports, been forced to wait in long lines, or spent hours on hold trying to rebook their flights,” the report continued. 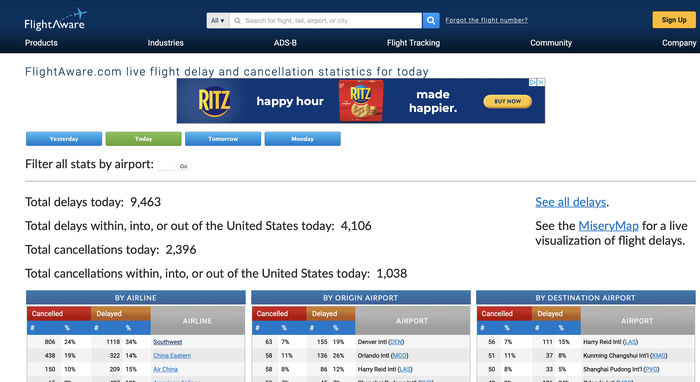 “Flight tracking company Flight Aware is reporting 27% of Sunday’s flights have already been canceled as of around 8 a.m.,” the report added. “The airline had said that things might improve today, but so far it’s actually gotten a bit worse. According to Flight Aware, Saturday saw some 800 cancellations. Sunday morning it’s worse with more than 1,000 flights canceled.”

News Nation Now’s Leland Vittert is reporting that there is a mass “sickout” affecting Southwest’s service.

Southwest Airlines, however, is providing cover for the operational distruption by claiming there were “ATC issues” and “disruptive weather.”

ATC issues and disruptive weather have resulted in a high volume of cancellations throughout the weekend while we work to recover our operation. We appreciate your patience as we accommodate affected Customers, and Customer Service wait times are longer than usual. (1/2) pic.twitter.com/o1scQJ5lLb

The airline then called for customers to use ‘self-service rebooking.’ There were massive flight disruptions across the country reported.

“Florida was among the places hardest hit,” the Points Guy reported. “Tampa International Airport Spokeswoman Emily Nipps told the Tampa Bay Times the FAA imposed an air traffic management program on Friday night that grounded many Southwest planes. That led to a domino effect. Eleven out of 15 scheduled flights to Tampa Saturday night were canceled.”

“It was a similar story Saturday night in the San Francisco Bay Area where local news reported 11 flights to Oakland and 11 more to San Jose International were canceled,” the report continued.

“There were, indeed, major problems at Air Traffic Control in Jacksonville, Florida on Friday night,” the report added. “A staff shortage along with some storms led to many canceled or delayed flights.”

“Due to a combination of severe weather, active military training in the airspace, and unexpected limited staff at the Jacksonville facility that handles high-altitude, en route traffic, the FAA took steps to safely manage air traffic the evening of Oct. 8. Normal operations returned at approximately 10 p.m.,” the FAA claimed.

The Southwest Airlines Pilots Association is suing over new federal vaccine rules, Bloomberg noted. Both Southwest and American Airlines pilots unions warned that pilots might quit in droves if the federal vaccine mandate is implemented.

“Southwest said it has to mandate vaccines because of new rules from the Biden administration requiring companies with federal contracts to have vaccinated staffs,” KDVR reported. “Southwest’s work for the government includes flying the military in emergencies and carrying mail for the U.S. Postal Service.”

However, the Biden administration’s OSHA regulation that mandates qualifying employers ensure that their employees are vaccinated has not been formally issued despite having been announced over one month ago.

“Last week, rivals American Airlines, Alaska Airlines and JetBlue told their staff they needed to be vaccinated,” KDVR noted. “United Airlines in August was the first major airline to do so and has since said that more than 97% of its workers have been vaccinated. United also said it would put staff who couldn’t get the shots due to medical or religious reasons on unpaid leave until COVID-19 rates go down.”

One Month After Biden Announced Federal Vaccine Mandate, It Still Has Not Been Formally Issued