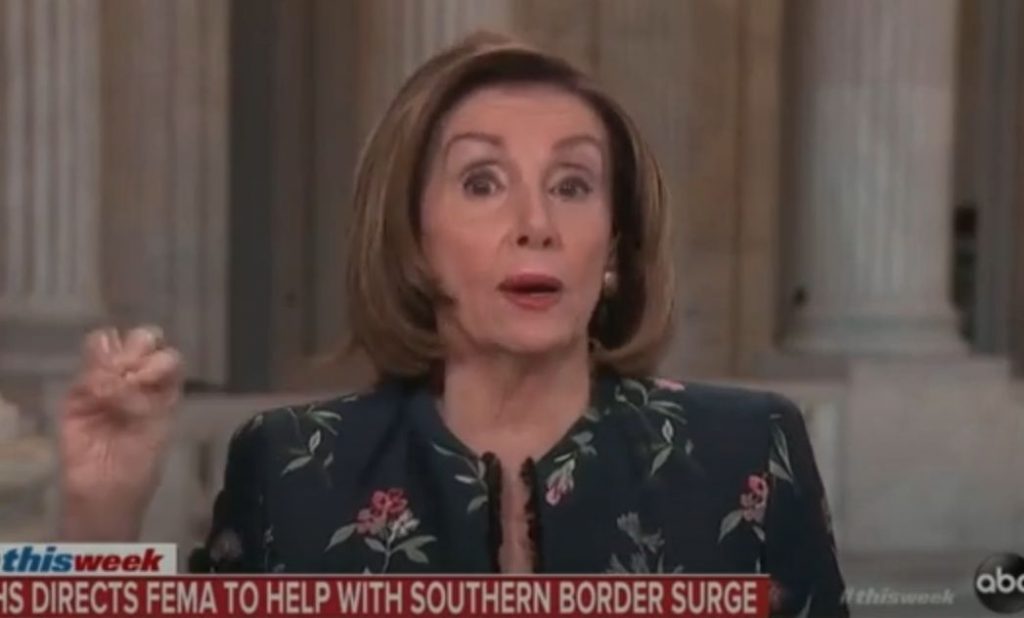 On ABC’s ‘This Week with George Stephanopoulos, the Speaker made it clear who she thinks is responsible for the migrant surge.

“Let’s talk about the situation at the border,” Stephanopoulos began. “We’ve seen a huge surge in migrants crossing the border since January. The number of children in custody, higher than it was than its 2019 peak during the Trump Administration. The conditions were called unacceptable. She was there on Friday. Is she right? What more must be done?”

“I’m sorry. I didn’t hear who you said,” Pelosi said with a twitch.

““Veronica Escobar,” he reminded her.

“Yes, our colleague from representing El Paso, and yes, it is,” she replied. “The — actually, the facts of these, there are more children, about 600, 700 more children, unaccompanied children coming over the border. This is a humanitarian challenge to all of us.”

“What the administration has inherited is a broken system at the border, and they are working to correct that in the children’s interest,” Pelosi said. “I’m so pleased that the president as a temporary measure has sent FEMA to the border to help facilitate the children going from one 72-hour issue where they are cared for as they are transferred into family homes or homes that are safe for them to be. So this, again, is a transition for what was wrong before to what is right.”

According to Pelosi’s pretzel logic, Biden issuing an executive order to limit ICE’s ability to arrest and detain illegal immigrants is improving the border situation. So is restoring DACA and reducing the screening protocols for sponsor families. So is halting all progress on the construction of a wall at the southern border.

“Of course, we have to also look to Central America, Mexico and the rest,” Pelosi continued. “The corruption, the violence, all of that. My most recent trip to the northern triangle, that would be Honduras, Guatemala, El Salvador.”

“You saw the impact of climate change,” she said. “These people were leaving because of the drought. They couldn’t farm— and they were seeking other ways to survive.”

“There are many reasons to go into this, but the fact we have to deal with it at the border, and some of the people coming there are seeking asylum, and I always like to quote our friends in the evangelical movement, at one of our hearings we had before the majority of the representatives said to us, ‘the United States refugee resettlement program is the crowned jewel of American humanitarianism’  So we have certain responsibilities that we must honor. We have to have a system that accommodates that, and that is what the Biden administration is in the process of doing.”

The most humanitarian thing the Democrats could do for the world is ensure that the United States remains a beacon of freedom and hope. It should export free markets and the rule of law to other countries, instead of importing their impoverished masses.  That would be vastly more effective and compassionate than letting millions of illegal immigrants into the country.

Then again, how else would the Democrats make up the millions of votes they would lose due to their disastrous policies?