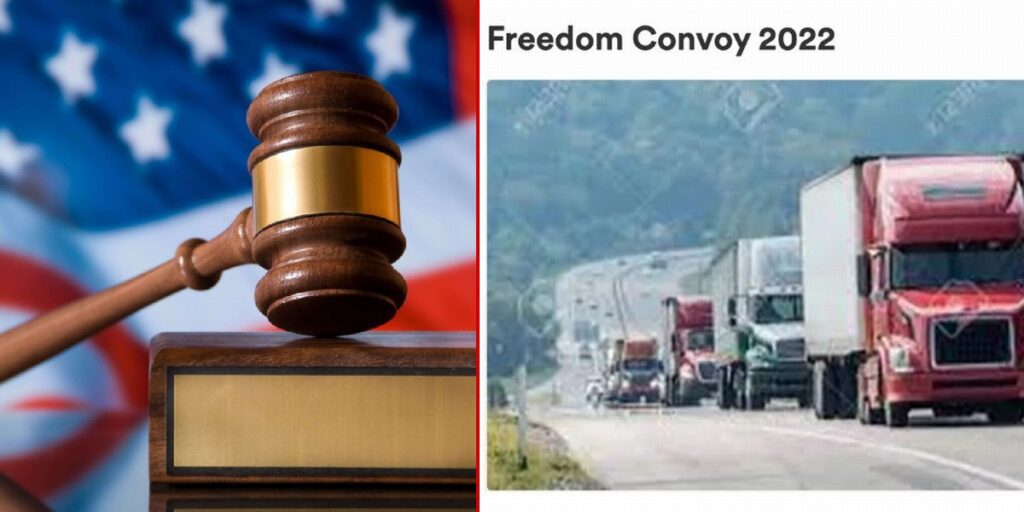 On Friday, a full day after freezing the Freedom Convoy 2022 account, it took the unprecendented act of seizing its ten million dollars in funds to redistribute to “credible charities.” 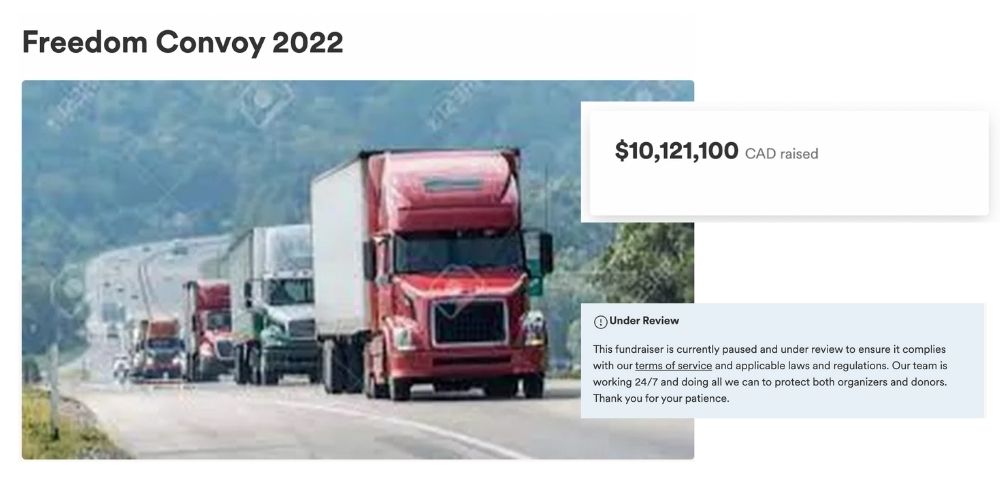 “To ensure GoFundMe remains a trusted platform, we work with local authorities to ensure we have a detailed, factual understanding of events taking place on the ground,” GoFundMe claimed. “Following a review of relevant facts and multiple discussions with local law enforcement and city officials, this fundraiser is now in violation of our Terms of Service (Term 8, which prohibits the promotion of violence and harassment) and has been removed from the platform.”.

“Organizers provided a clear distribution plan for the initial $1M that was released earlier this week and confirmed funds would be used only for participants who traveled to Ottawa to participate in a peaceful protest,” the crowdsourcing platform added. “Given how this situation has evolved, no further funds will be directly distributed to the Freedom Convoy organizers —we will work with organizers to send all remaining funds to credible and established charities chosen by the Freedom Convoy 2022 organizers and verified by GoFundMe.”

“All donors may submit a request for a full refund until February 19th, 2022 using this dedicated refund form.”

We want to thank @gofundme for listening to our concerns as a City and a police service. The decision to withhold funding for these unlawful demonstrations is an important step and we call on all crowdfunding sites to follow.

“We want to thank GoFundMe for listening to our concerns as a City and a police service,” the police’s Twitter account said. “The decision to withhold funding for these unlawful demonstrations is an important step and we call on all crowdfunding sites to follow.”

Neither the Ottawa Police nor GoFundMe provided any credible information tying ‘violent’ or ‘unlawful’ protesters to Freedom Convoy 2022 protesters. Seizing the funds would thereby constitute a fraudulent act.

GoFundMe has a track record of supporting Black Lives Matter, whose organizing spurred violent rioting in cities across the world. In the U.S. alone, Black Lives Matter-fueled riots did an estimated $2 billion in damages, and led to dozens of deaths.

GoFundMe released its annual Year in Giving report at the end of 2020 that showed over 500,000 people had donated to BLM-affiliated charities, and amassed tens of millions of dollars. The official George Floyd Memorial Page shows over $14 million in contributions alone. Even current vice president Kamala Harris, as well as numerous Hollywood celebrities, supported bail fund charities that ended up being used to free rioters.

“In Brooklyn, N.Y., a bail fund received $1.8 million from 50,000 contributors — in only 24 hours — before asking donors to give elsewhere,” the New York Times reported. “In Philadelphia, the bail fund hauled in $2.4 million. And in Los Angeles, one GoFundMe page for the local chapter of Black Lives Matter zoomed past $2 million raised, and another for a previously undersized group, the People’s City Council, leapt from $1,500 raised to $2.3 million.”

Dozens of organizations crowd-sourced fundraisers to bail out BLM rioters, including on GoFundMe. There were numerous BLM protesters arrested at riots who were shown to be violent criminals.

The California Attorney General recently had to send a warning to the official Black Lives Matter organization over its non-compliance with charity reporting.

“BLM was given 60 days to file tax and charity documents for 2020 — the year it previously confirmed collecting a staggering $90 million, with at least $60 million left over after expenses and grants,” the New York Post reported.

Nonethless, GoFundMe has failed to take action against the main BLM fundraisers, except to stop alleged fraudulent activity. In 2020, it froze the activity of a Black Lives Matter Foundation group that was imitating Black Lives Matter.

The Ottawa Police have even tweeted support in the past for Black Lives Matter.

“We respect the rights of our residents and community members to speak out when they see injustices and we understand the community’s deep pain and frustration,” Ottawa police said in a 2020 statement.

How things have changed. Now, state attorneys generals in the U.S. are launching investigations into GoFundMe, which is based in Redwood, California.

These are the types of patriots that deserve to be re-elected. Please join me in thanking @ChrisCarr_Ga.

“Just spoke with Georgia Attorney General Chris Carr, who said he will have his team look into GoFundMe’s theft of millions of dollars from hardworking Americans supporting the Freedom Convoy,” ” C.J. Pearson tweeted, adding, “Good on him. This is how we fight back.”

#GoFundMe now won’t honor #FreedomConvoy donations and will instead redirect to other charities?

In WV, organizations must not deceive donors and engage in deceptive advertising practices.

If you’ve been victimized by a deceptive act or practice, let us know!

“In WV, organizations must not deceive donors and engage in deceptive advertising practices,” he pointed out. “If you’ve been victimized by a deceptive act or practice, let us know!”

“According to their website, #GoFundMe is not automatically refunding the donations,” he added. “Individuals interested in a refund can submit the form below if they do so by Feb 19, 2022. This will avoid the ‘redirecting’ of the donation.”

🚨It’s totally unacceptable for @gofundme to siphon over $9M in donations sent to support #TruckersForFreedom2020 & funnel it to causes it supports.

I will be investigating these deceptive practices. Donors should be given a refund.#TruckersConvoy2022 #TruckersForFreedom

“It’s totally unacceptable for @gofundme to siphon over $9M in donations sent to support #TruckersForFreedom2020 & funnel it to causes it supports,” Schmitt wrote.

“I will be investigating these deceptive practices,” he added. “Donors should be given a refund.”

There is more legal action underway, as well as direct action being planned against GoFundMe in the form of peaceful protests at its headquarters. Stay tuned, America. The pushback is only beginning.

The White House Throws Fauci ‘Under the Bus’: Jen Psaki Claims the Biden Administration Has ‘Not Been Pro-lockdown’