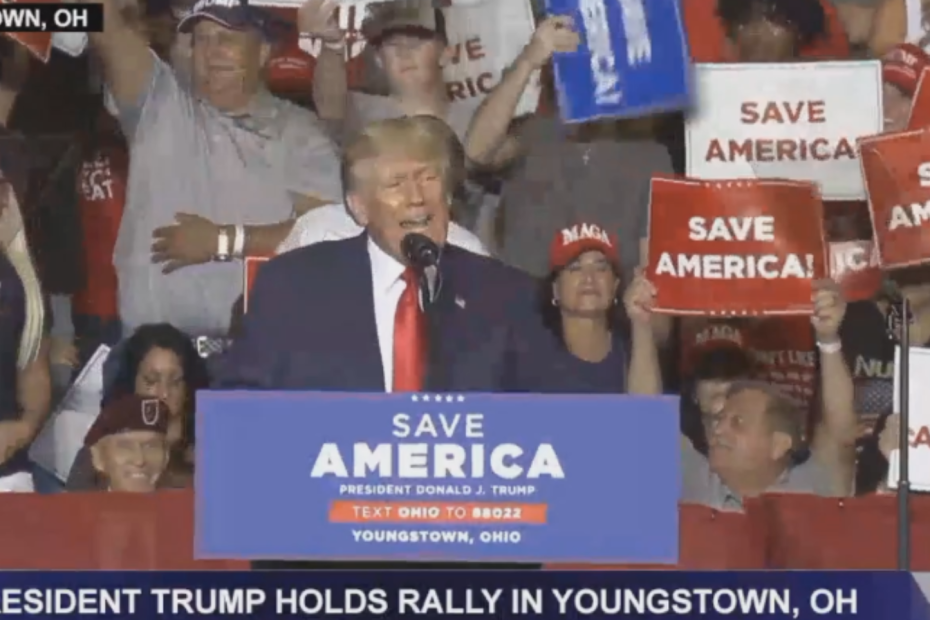 Donald Trump has been under serious pressure due to politicized DOJ investigations ranging from his role in the January 6 riots to a legal dispute over ‘classified’ documents to the workings of his Save America PAC campaign arm.

But a defiant Trump was unfazed at a political rally in Youngstown, Ohio on Saturday night where he teased an announcement about his political ambitions.

“And we’re up,” Trump added. “We’re way up in this great state. But first we have to win a historic victory for the Republican party. This November, we have to do it. We have to swamp ’em ’cause they cheat like hell among our highest priorities must be to end the nightmare.”

“Joe Biden and congressional Democrats have done deliberately creating chaos on an open border,” he added. “I thought they were, I don’t know. Can that be good politics? When you look and you see millions of people just walking into our country, you know, somebody said they do it for — first of all, I’m doing so well with a Hispanic vote. I think most of those people are going to vote for me and a lot of Republicans.”

“The radical Democrat Congress has turned our country into one giant sanctuary for dangerous criminal aliens,” Trump added. “In the Republican Party, we believe our country should be a sanctuary for law abiding citizens who love America.”

You can watch Donald Trump’s Ohio rally in full via his Rumble channel:

Texas Strikes Victory for Free Speech: Big Tech Can Be Sued for Censoring Users Over Content of Political Posts