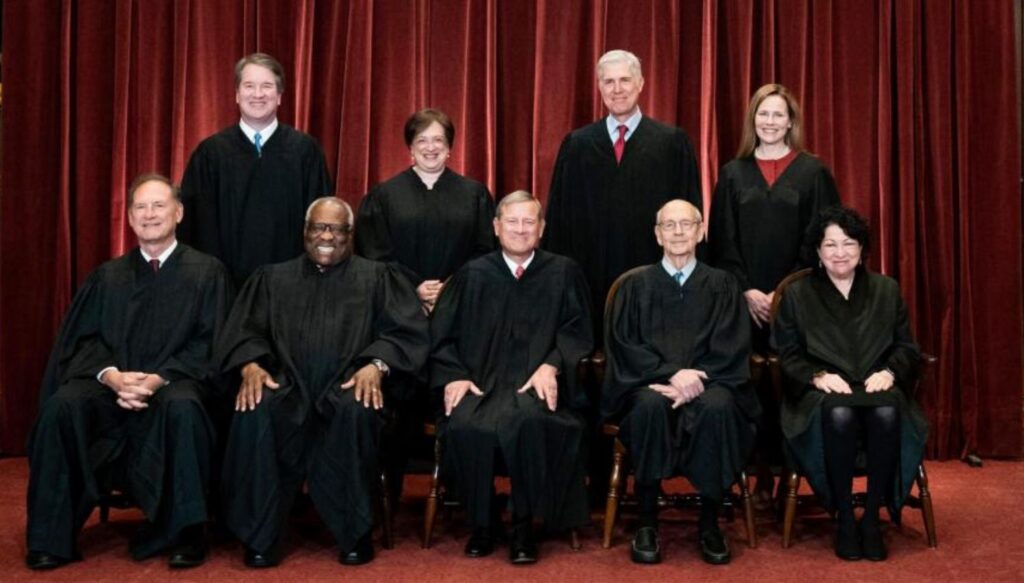 The United States Supreme Court refused to rule on behalf of multiple litigants suing The State of New York over its unlawful vaccine mandate, which does not have religious exemptions.

“The application for injunctive relief presented to Justice Sotomayor and by her referred to the Court is denied,” the ruling states.

The court left its ruling unsigned, thereby declining to provide reasoning that could potentially be used in future legal arguments before the court. Justice Clarence Thomas would have granted the injunctive relief. Justices Gorsuch and Alito dissented from the denial of application. Justices Amy Coney Barrett and Brett Kavanaugh, both Trump nominees, both essentially sided with the liberal wing of the court, along with Chief Justice John Roberts.

Justice Gorsuch wrote the dissent on the high court’s ruling.

“Facing the imminent loss of their jobs and unemployment benefits, the doctors and nurses before us filed two separate lawsuits seeking a preliminary injunction preventing New York from enforcing its new mandate against them,” Justice Gorsuch wrote. “In the first suit, District Judge David Hurd granted the requested relief after concluding that New York’s ‘intentional change in language is the kind of religious gerrymander’ that violates the First Amendment. In the second suit, the District Court
reached a contrary conclusion and denied relief without an opinion.”

“Under the Free Exercise Clause, government ‘cannot act in a manner that passes judgment upon or presupposes the illegitimacy of religious beliefs and practices’,” Gorsuch continued. “As a result, we have said that government actions burdening religious practice should be ‘set aside’ if there is even ‘slight suspicion’ that those actions ‘stem from animosity to religion or distrust of its practices’.”

“New York’s mandate is such an action,” he went on. “The State began with a plan to exempt religious objectors from its vaccine mandate and only later changed course. Its regulatory impact statement offered no explanation for the about-face. At the same time, a new Governor whose assumption of office coincided with the change in policy admitted that the revised mandate ‘left off’ a religious exemption ‘intentionally’.”

“The Governor offered an extraordinary explanation for the change too,” he noted. “She said that ‘God wants’ people to be vaccinated—and that those who disagree are not listening to ‘organized religion’ or ‘everybody from the Pope on
down.’ Then the new Governor went on to announce changes to the State’s unemployment scheme designed to single out for special disfavor healthcare workers who failed to comply with the revised mandate. This record gives rise to more than a ‘slight suspicion’ that New York acted out of ‘animosity [toward] or distrust of’ unorthodox religious beliefs and practices.”

“This record practically exudes suspicion of those who hold unpopular religious beliefs,” Gorsuch added. “That alone is sufficient to render the mandate unconstitutional as applied to these applicants.”

The entire dissent can be read below.

Justice Gorsuch continued to shred the legal arguments that New York’s vaccine mandate rely upon, in much the same way as Judge David Hurd did in the lower court ruling. Unfortunately, the Supreme Court nominees that former President Donald Trump selected to uphold the Constitution have utterly failed in their duties.

The Supreme Court is yet another once-respected institution that has completely failed the American people.