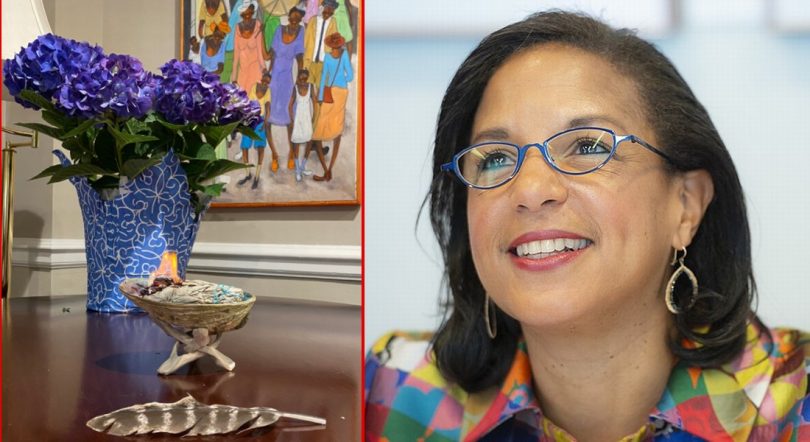 The Biden White House is seeing a bit of “bubble, bubble, toil and trouble,” thanks to new domestic policy adviser Susan Rice.

Rice, the former Obama National Security Adviser, is taking to warding off evil spirits by burning sage, a controversial practice among actual witches, who are said to prefer cinnamon. The reason Rice is burning sage is an interesting one: She obviously believes a ‘white supremacist’ resided there.

“And Rice, a lightning rod for conservative critics during the Obama Administration, appeared to confirm the symbolism of the act by retweeting an image of her office following a brief mention in a New York Times story about her,” the Mail added.

Susan Rice is following the magic practice of Native cultures in burning sage, which became a popular Instagram fad. But Fashionista slams the trend as ‘cultural appropriation.’

“Smudging sage has nothing to do with the magical room-cleansing nonsense sold by uninspired capitalists,” writer and activist Taté Walker, a Mniconjou Lakota and a citizen of the Cheyenne River Sioux Tribe, told Fashionista. “Speaking for myself and what I’ve been taught about my Lakota culture, sage is a critical component within Lakota medicinal and ceremonial knowledge.”

“Walker notes that not all Native cultures burn sage for prayer, which is known as smudging,” Fashionista adds.

“Smudging is very specific to prayer, so you can burn sage without smudging and you can smudge without needing to light sage on fire,” Walker adds.

Rice is thus giving stiff competition for head witch in D.C. to Nancy Pelosi, who was recently reported to have gone shopping at Target.

Of course, even Senator Lindsey Graham is getting in on conjuring up the dark arts to practice politics in The Swamp.

Graham recently revealed in an Axios on HBO clip he knows how to deal with Trump’s “dark side” and “harness the magic.”

The reports of witchcraft in the nation’s capitol are unsurprising to the American people, who have seen numerous politicians fall under the dark spell of Beltway politics for years.