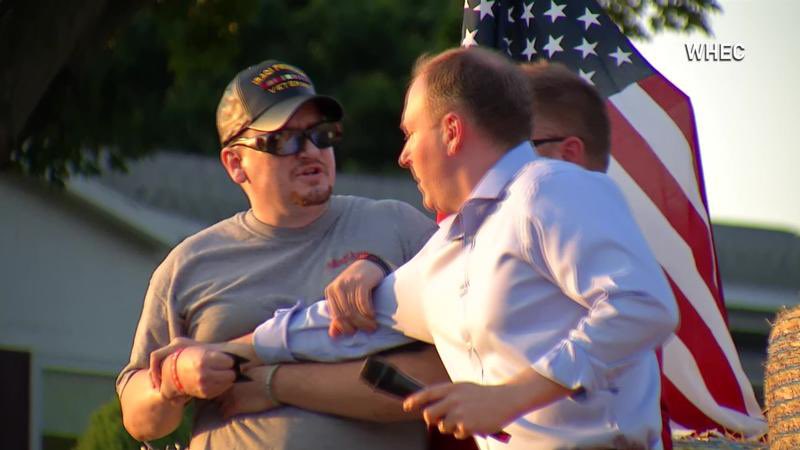 On Thursday night, a political assassination attempt was made on New York Congressman Lee Zeldin at a campaign event.

The suspect, 43-year-old David G. Jakubonis, leapt on stage brandishing a weapon and swung at the Congressman’s neck.

Rep. Zeldin released a statement on the harrowing attack on Twitter.

His words as he tried to stab me a few hours ago were “you’re done”, but several attendees, including @EspositoforNY, quickly jumped into action & tackled the guy.

Law enforcement was on the scene within minutes.

The attacker will likely be instantly released under NY’s laws. pic.twitter.com/wZEyIyrjFe

“His words as he tried to stab me a few hours ago were ‘you’re done’, but several attendees, including @EspositoforNY, quickly jumped into action & tackled the guy,” Zeldin said. “Law enforcement was on the scene within minutes.”

“The attacker will likely be instantly released under NY’s laws,” Zeldin added. It turned out that he was later proven correct.

The Monroe County sheriff’s office released a statement that bore out that Jakubonis was released on his own recognizance. 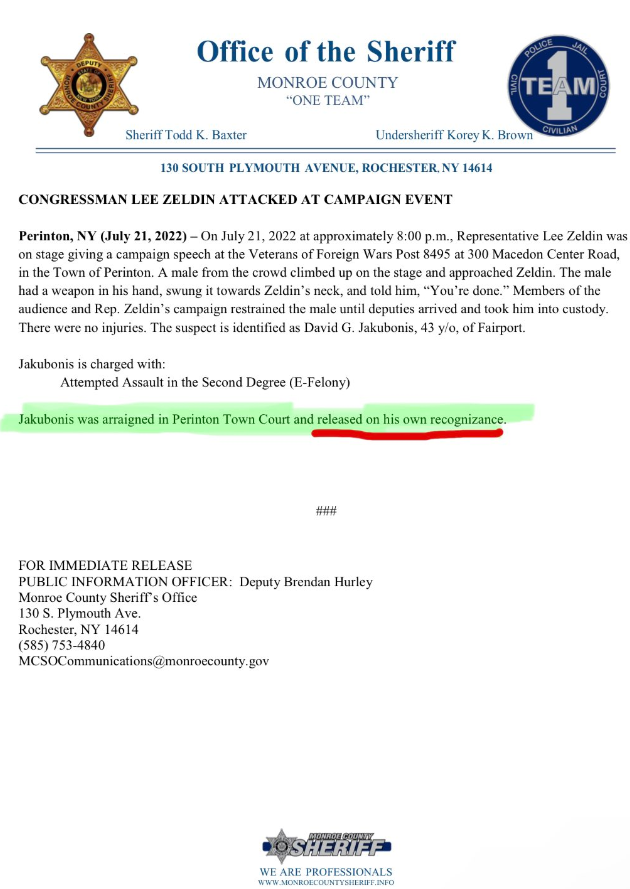 “On July 21, 2022 at approximately 8:00 p.m., Representative Lee Zeldin was on stage giving a campaign speech at the Veterans of Foreign Wars Post 8495 at 300 Macedon Center Road, in the Town of Perinton,” the statement says. “A male from the crowd climbed up on the stage and approached Zeldin. The male had a weapon in his hand, swung it towards Zeldin’s neck, and told him, ‘You’re done.'”

“Members of the audience and Rep. Zeldin’s campaign restrained the male until deputies arrived and took him into custody,” the statement continued. “There were no injuries. The suspect is identified as David G. Jakubonis, 43 y/o, of Fairport.”

“Jakubonis is charged with: Attempted Assault in the Second Degree (E-Felony),” the statement added. “Jakubonis was arraigned in Perinton Town Court and released on his own recognizance.”

The political assassination attempt made on Lee Zeldin has been covered with a fairly subdued reaction in the national media.

In June, there was a political assassination attempt on conservative Supreme Court Justice Brett Kavanaugh, which was also accompanied by little outcry from the Biden administration.

The Democratic Party has preached ‘silence is violence’ when it comes to attacks made on members of their own party. So, what are Americans to make of their silence on these politically motivated attacks?

It is hard to imagine a scenario where an extremist would attempt an assassination on a Democratic member of Congress, such as fellow New York Rep. Alexandria Ocasio-Cortez, without explosive wall-to-wall media coverage.

But if it’s a conservative who is under attack, the mainstream media doesn’t appear to care. It’s an extremely dangerous media double standard that betrays whose side activist journalists are really on.