Texas and Florida Continue to Beat Lockdown States: Fauci ‘Not Sure’ Why Open States are Winning

Dr. Anthony Fauci is unsure why Texas and Florida continues to defy the settled “science” on COVID-19. Since the states did away with the mask mandates and authorized all businesses to re-open, there has not been a disproportionate surge in COVID cases, hospitalizations, or deaths.

Dr. Fauci was asked why Texas hasn’t seen the often predicted surge on MSNBC this week. “I’m not really quite sure,” he said. “It could be they’re doing things outdoors.”

Fauci added in his MSNBC interview that it may take weeks to see any effects from re-opening the state on the number of COVID cases.

“I hope they continue to tick down. If they do, that would be great but there’s always the concern when you pull back on methods — particularly on things like indoor dining and bars that are crowded — you could see a delay and then all of a sudden tick right back up,” Fauci said.

“We’ve been fooled before by situations where people begin to open back up. Nothing happens and then all of a sudden several weeks later things explode on you, so we’ve got to be careful we don’t prematurely judge that,” he added.

Texas has become one of the biggest targets for lockdown and mask advocates. The state has even hosted a baseball game with 100% attendance. Texas Governor Greg Abbott and Florida Governor Ron DeSantis have also taken stands against COVID passports.

The Lone Star State has continued to beat many lockdown states in terms of daily cases and daily deaths with a COVID infection based on government data provided by the NY Times. The COVID cases in Texas continue to decline steadily despite the state’s reopening and elimination of the mask mandate. 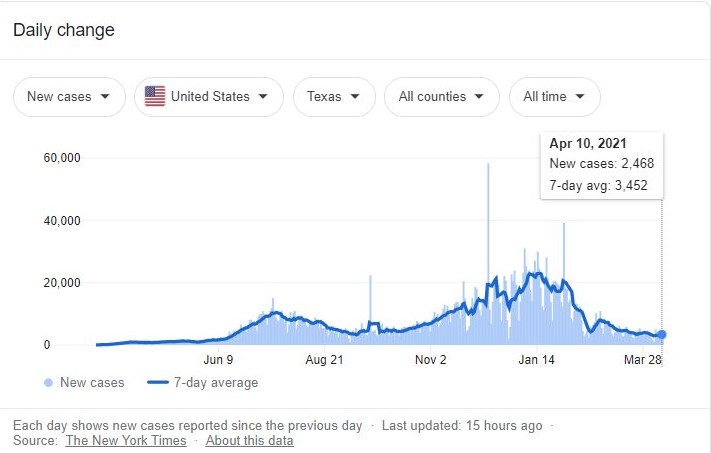 The COVID-related deaths in Texas also continue to decline. 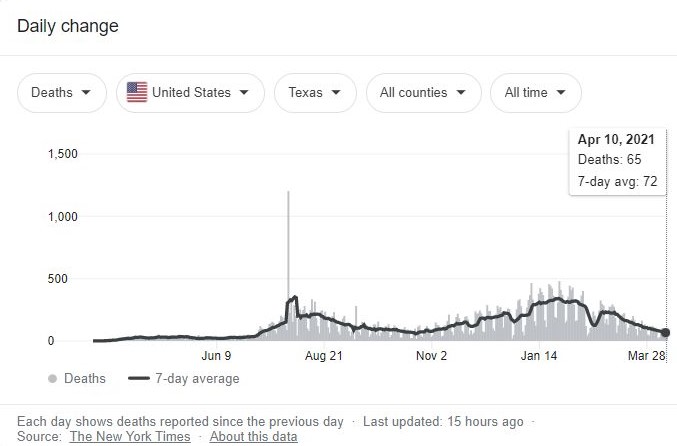 Compare the state’s record with that of New York, a heavily locked-down state managed by Governor Andrew Cuomo. Here is the recent trend in COVID cases. 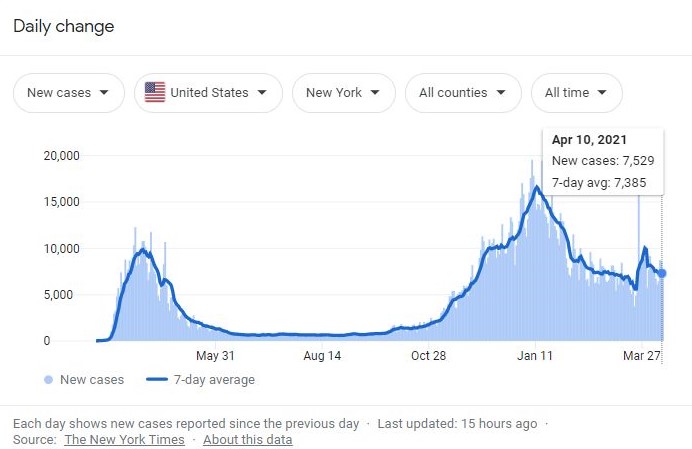 As you can see, there has been a third spike. The following is the New York trend in cases. 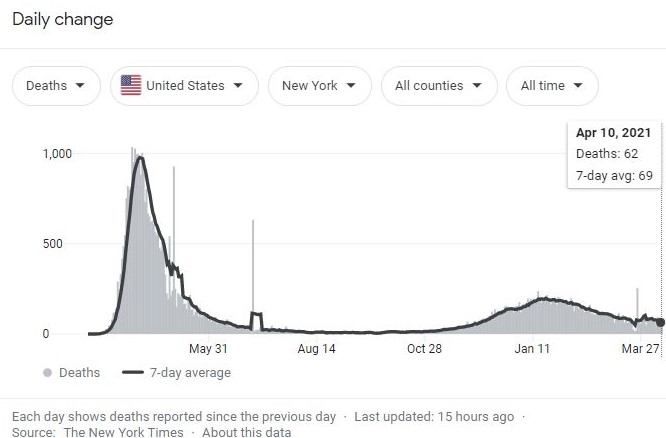 Gratefully, there has not been a proportionate spike in COVID deaths. Here are the cases in locked-down state Michigan, run by Governor Gretchen Whitmer. 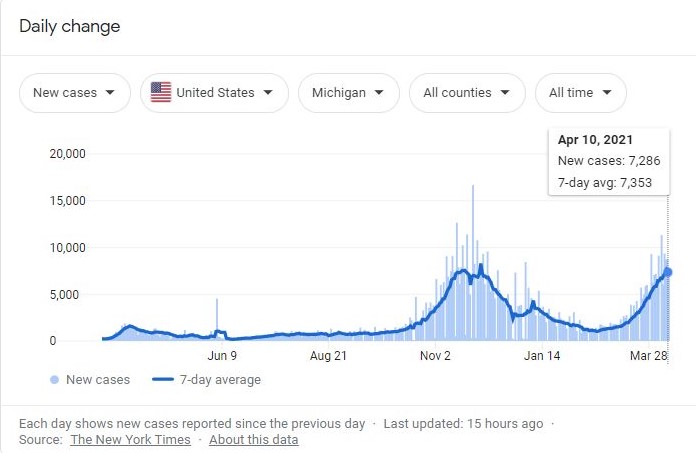 The COVID-related deaths are also ticking up in Michigan. 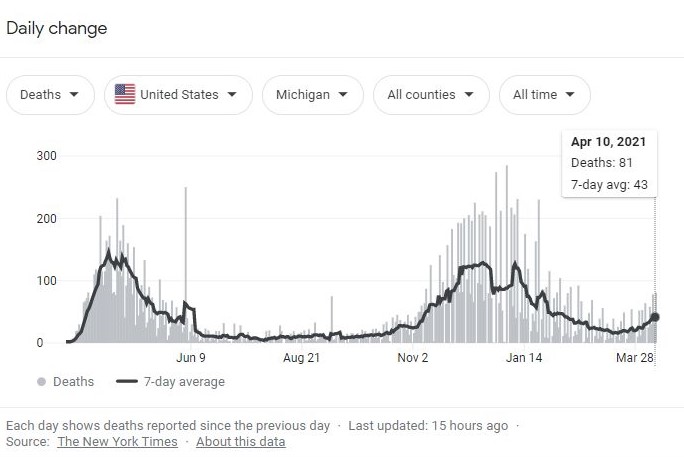 In California, the cases are thankfully beginning to recede. Governor Gavin Newsom, facing a recall threat, has recently vowed to reopen the state. 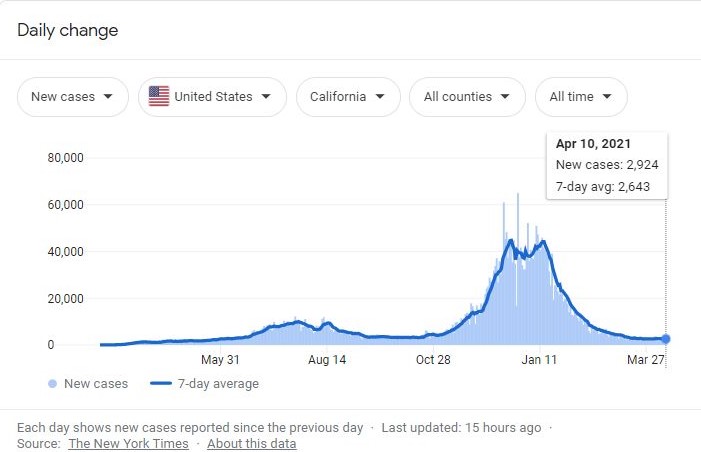 The state is also starting to see a steady decline in the number of deaths. 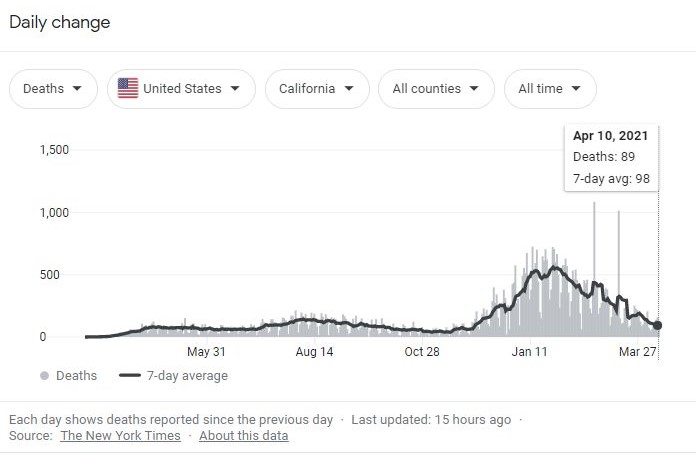 Another state that has been even more on the forefront of opposing heavy-handed lockdowns and mask mandates is Florida. The Sunshine State is holding steady on cases, despite baseless accusations the data are not reliable. 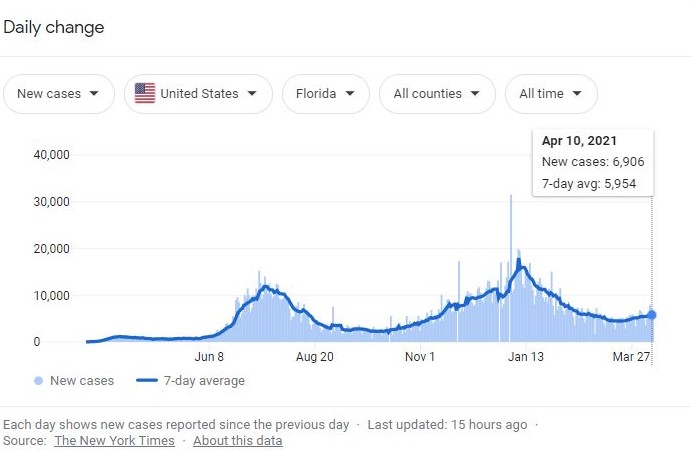 The number of COVID-related deaths in the state is also dropping in combination with the state’s successful vaccine rollout. 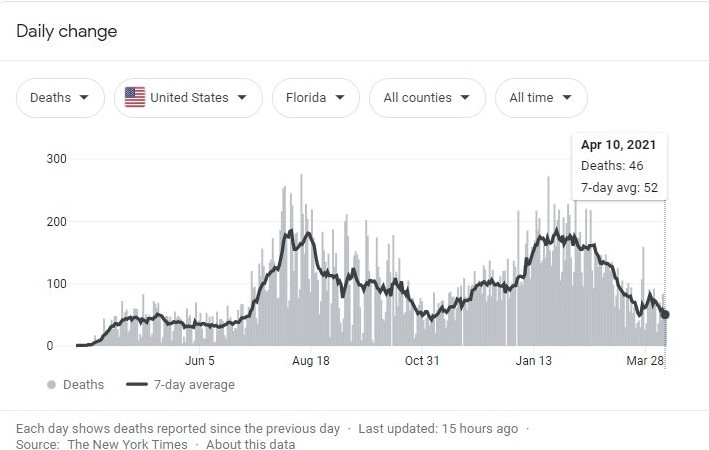 In fact, the top ten states for COVID cases per capita this week are all heavy lockdown states. 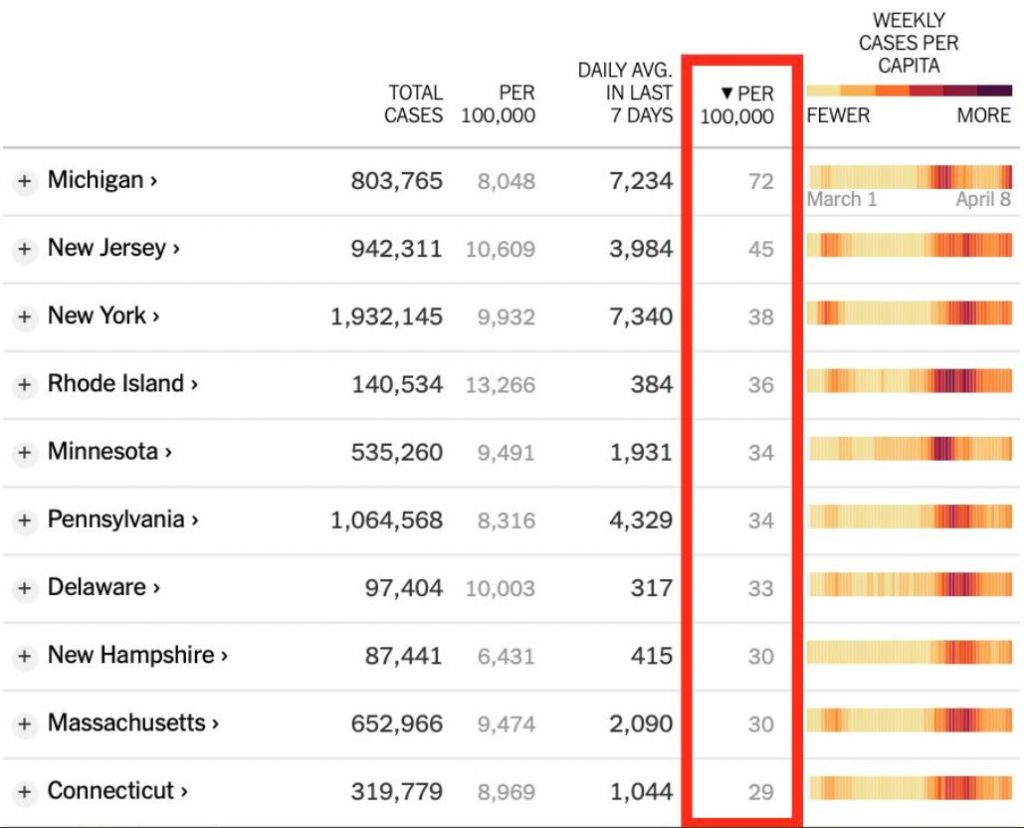 It has been reported that sunlight and ventilation can damage the virus, thereby lowering the risk for people when outdoors. It may also partly explain why southern states and northern states have had different experiences with the viral outbreak.

The decline in cases and deaths in Florida and Texas is not the only thing these states’ critics have been mistaken about. A recent CDC study confirms that the risk of catching COVID-19 from surfaces is miniscule.

“The Centers for Disease Control and Prevention (CDC) just released a new scientific brief that says your risk of contracting COVID-19 from a surface is about 1 in 10,000,” Yahoo News reported. “That means, on average, you have a 0.01% chance of actually picking up the virus from, say, touching a counter.”

Earlier, Fauci had urged extreme caution when handling objects, even those that have been left outside. He also rightly urged handwashing as a smart practice to limit one’s risk exposure, which is true in general about potential viral and bacterial contamination.

“We know that the virus for a limited period of time can live on what are called fomites, which are inanimate objects,” Dr. Fauci said in August. “So what I do, for example, when something comes—the package, you know, I don’t scrub it down. I just leave it on the side for a couple of days before I open it. And even that is probably overkill, because most of the things we’re talking about, this is fundamentally a respiratory-borne virus. Even though there is the possibility, if not the reality, of some small part of it being transmitted by things that you can touch.”

“I think washing hands really so much obviates the need to be cleaning everything around you,” he added. “[That’s] the one thing you could do very easily.”

The CDC earlier had only a vague sense of how often the virus could be spread on surfaces.

“Based on data from lab studies on COVID-19 and what we know about similar respiratory diseases, it may be possible that a person can get COVID-19 by touching a surface or object that has the virus on it and then touching their own mouth, nose, or possibly their eyes, but this isn’t thought to be the main way the virus spreads,” the CDC had said.

Dr. Fauci in the past has left open the idea that scientific understanding evolves along with testing and new data.

“It’s something we’re learning more and more about. We’ve got to make sure that we’re humble enough to accumulate new knowledge and use it as we get it,” Fauci said in regards to the virus’s behavior.

Compare this scientific perspective to that of politicians like Joe Biden, however, who blasted Texas for reopening the state and doing away with the mask mandate as “Neanderthal thinking.”

“The last thing we need is Neanderthal thinking,” Joe Biden said. “That, in the meantime, take off your mask, forget it. It still matters.”

What matters more than political invective is the actual science. And the science thus far is on the side of open states like Texas and Florida, and not the heavy lockdown states like New York and Michigan, which have been widely praised in the media.