Uvalde, Texas was the scene of a horrific mass shooting on Tuesday that left a schoolteacher dead as well as fourteen children. The suspect, 18-year-old Salvador Ramos, is reported to now be dead.

Ramos appears to have entered the elementary school as police officers surrounded the school as was captured in a chilling video. Watch:

Ramos was a student at Uvalde High School and is an U.S. citizen, Governor Abbott said at a press conference. He appears to have killed his grandmother prior to the shooting rampage and showed up at the elementary school in the course of a police chase.

He appeared to have had one Instagram account, Salv8dor_, which had one post with a number of photos. The Instagram Page @Salv8dor_ Tagged a random woman write before the shooting with the writing, ‘I Got Lil Secret.’ The page was deleted after the Abbott address.

There also appears to be a dupe page of @Salv8dor_ on Instagram. The original account was deleted earlier today, so if there is a live page it is certainly a fake.

Ramos’s motives for killing his grandmother and the children have not yet been identified. In the Instagram post above, however, he is shown to have rifles and a rifle magazine. 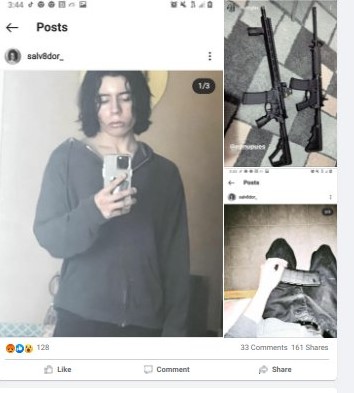 Governor Abbott addressed the public over the heinous shooting.

The shooting is reported to have begun around noon local time.

“Update @ 1:06 Shooter is in Police Custody,” the Uvalde Police Department wrote in a statement.

“There is an active shooter at Robb Elementary. Law enforcement is on site. Your cooperation is needed at this time by not visiting the campus. As soon as more information is gathered it will be shared,” Robb Elementary School wrote on Facebook.

Police then confirmed there was a “large Police presence at Robb Elementary 715 Old Carrizo St. We ask the public to avoid the area.”

“Update on the shooting at Robb Elementary School in Uvalde: at University Hospital, one patient, a 66-year-old woman, is in critical condition, University Health tweeted. “We do not yet have a condition to report on the child.”

The ATF also appeared to be assisting with the response and investigation.

The federal Bureau of Alcohol, Tobacco and Firearms, tweeted: “@ATFHous on scene at Robb Elementary School in Uvalde, TX providing assistance in the investigation of a school shooting. Uvalde Police Department is the point of contact and will release more information as it becomes available.”

The Uvalde, Texas mass shooting is among the worst school shootings in U.S. history. It follows upon a Buffalo mass shooting at a supermarket just over a week ago that left ten people dead and three injured. The two deadly mass shootings have reignited Democratic lawmakers’ calls for gun control.