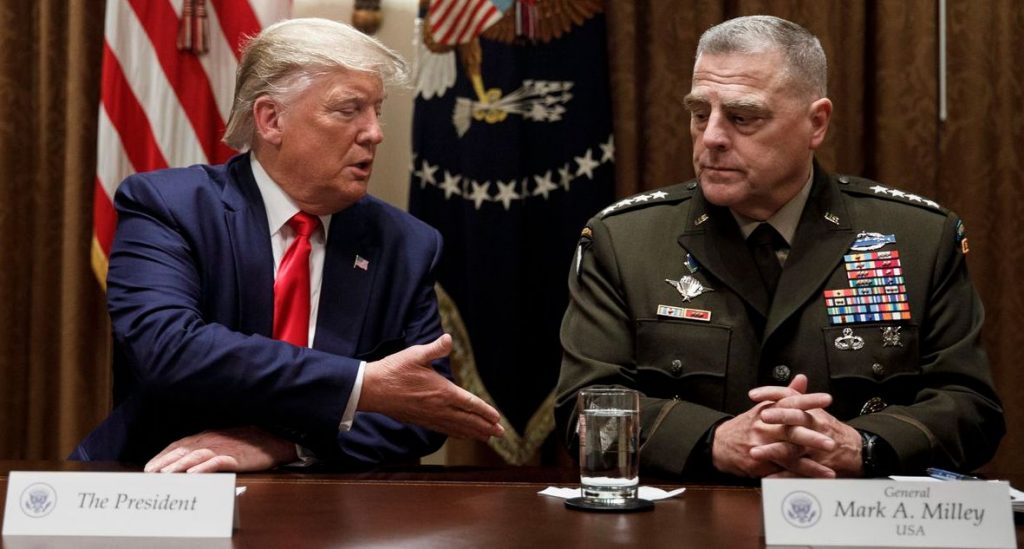 Donald Trump responded on Tuesday to bombshell revelations that General Mark Milley, the former president’s and current Chairman of the Joint Chiefs of Staff, has committed a ‘treasonous’ act by making phone calls to a Chinese general both prior to the November election and after the January 6 riot.

In a Tuesday interview on Newsmax, the 45th President of the United States responded to the news.

“So, first of all, if it is actually true, which is hard to believe, that he would have called China and done these things, and was willing to advise them of an attack, or in advance of an attack, that’s treason,” Donald Trump said.

“I have had so many calls today saying, ‘that’s treason,'” Trump continued.

“It’s totally ridiculous, I never thought of it, you were there, you knew what was happening in the White House, you had plenty of friends,” Trump said to former White House press secretary Sean Spicer, “You never heard the word ‘China’ mentioned in a thing like this,” he added, referring to a potential military strike.

“The worst, the dumbest thing that anybody’s seen, probably the most embarrassing thing that’s ever happened to our country,” Trump added. “Where they killed our soldiers, we left with embarrassment on our face, we left Americans behind, and we left $85 billion worth of the best equipment in the world, that I bought, because I was the one who rebuilt our military and then Biden gave it away.”

“For him to say that I was going to attack China is the most ridiculous thing I’ve ever heard and everybody knows it,” he said.

“And I have to tell you, and I don’t know if they have him on tape saying this, but I found Woodward, and I found his cohorts, to be extremely dishonorable people, and that is why I didn’t interview with them,” Trump said.

“He is highly overrated,” he continued. “This guy is one of the most overrated guys. He is a sleaze, but I did not ever think of attacking China.”

“One other thing, I just read a report about a week ago, where they said ‘Donald Trump is the only president in decades that did not start a war’,” he added.