‘The American People Should Not Be Putting Up With This’: Trump Attorney Unloads on CBS Reporter in Stunning Interview 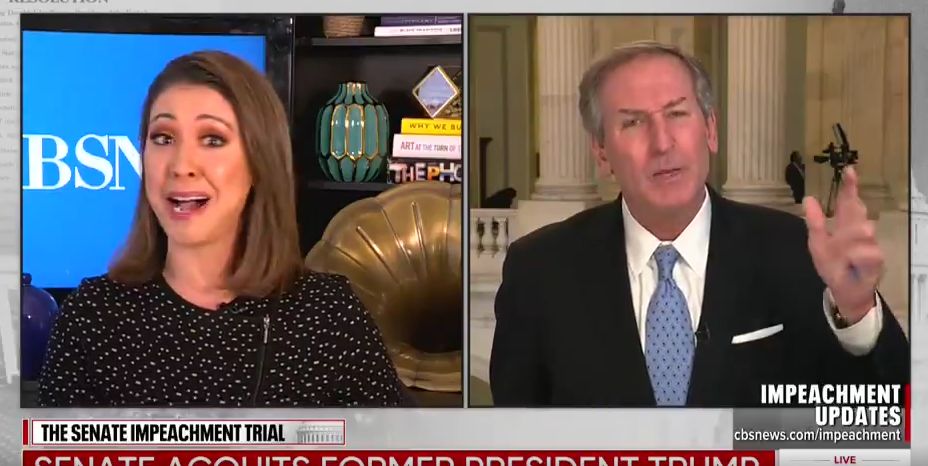 The interview’s contentious exchange led to the attorney airing one of the most remarkable cases of media criticism captured on mainstream television.

The interview turned fractious during Zak’s question about the “doctored” evidence that the House impeachment managers presented at the impeachment trial.

“The media has to start telling the right story in this country. The media is trying to divide this country. You are bloodthirsty for ratings. And as such, you’re asking questions now that are already set up with a fact pattern. I can’t believe you would ask me a question indicating that it’s all right just to doctor a little bit of evidence. There’s more stuff that we uncovered that they doctored, to be frank with you. And perhaps that will come out one day.

But we won this case. And I’m not a sore loser. But what happened– or a sore winner, I should say. But what should happen is somebody should look at the conduct of these House managers. It’s unconscionable, aside from all of the due process violations that my client had. And the media should be looking that at a square, straight way, a straight way. When I watch the news, I watch one station and it’s raining. I watch another station at the same time and it’s sunny.

Your coverage is so slanted. It’s got to stop. You guys have to stop and start reporting more like PBS does rather than a TV news show that doesn’t have any journalistic integrity at all. What I’m telling you is that they doctored evidence. And I believe your question says, well, it’s only a Twitter check and changing a year of a date here. They switched the date of a Twitter a year to try to connect it to this case. That’s not a small thing, ma’am.

The other thing they did is they put a checkmark on something to make it look like it was a validated account when it wasn’t. And when they were caught, they didn’t say anything about it. They didn’t even try to come up with an excuse about it. And that’s not the way our prosecutors or our government officials should be conducting themselves. And the media shouldn’t be letting them get away with it, either.

I’m tired of the biased media– on both sides, left and right. What this country wants, what this country needs, is this country to come together, to take the left and the right and find a middle ground and start responsibly being our public officials, our elected officials. And one of the reasons why they do it is because of the media, because the media wants to tell their narrative rather than just telling it like it is.”

What had launched the explosive tirade? An argument over the “doctored” evidence presented at the trial.

The CBS reporter had referred to Senate Minority Leader Mitch McConnell’s speech defending his “not guilty” vote in which he claimed Donald Trump was still “liable” for everything that happened under his administration.

“Are you expecting to face more charges against Mr. Trump in the near future?” Zak asked. “And do you anticipate being a part of that defense?”

“No, that’s just political rhetoric,” van der Deen bluntly responded. “I was hopeful that something would come out of this — that the political rhetoric would stop out of Washington D.C., but apparently it hasn’t.”

Awkward silence ensued on air, while the CBS reporter paused to collect her thoughts.

“Were you though surprised to hear those words coming from the leader of the Republican Party in the Senate?” she followed up.

“I’m not surprised to hear politicians say anything at all,” he flatly replied. “No.”

More awkward silence as Zak proceeded to the next question.

“Well, throughout — throughout the trial, you denied that Mr. Trump had a role in inciting the January 6th insurrection at the capitol…”

It should be noted here that Zak is arguing against van der Deen’s case.

“First, you argued there was no insurrection, but during the closing arguments you seemingly admitted that there was, in fact, an insurrection, using that word, saying that that was not up for debate. What role did the former president play–” she began.

“You didn’t understand the case. I used the word insurrection in my…” he responded.

“I’ll give you the opportunity to clarify, sir.”

“Sure,” van der Deen responded. “I used the word ‘insurrection’ in my closing argument when quoting the charging documents. What happened at the Capitol on January 6 is absolutely horrific. But what happened at the Capitol during this trial was not too far away from that. The prosecutors in this case doctored evidence. They did not investigate this case. And when they had to come to the court of the Senate to put their case on, because they hadn’t done any investigation, they doctored evidence.”

“It was absolutely shocking, I think, when we discovered it and we were able to expose it and put it out,” he continued. “I think it turned a lot of senators. The American people should not be putting up with this. They need to look at who these House managers were and look to see whether these are the folks they want representing them. It was shocking to me. Wouldn’t have believed it.”

A senior impeachment aide had attempted to defend the inclusion of a checkmark on a tweet presented at the trial as an “accident.” CNN’S Jake Tapper even mocked the Trump defense team for complaining about it: “It’s crazy. House impeachment managers had to build graphics of deleted tweets. For a Trump RT they erroneously added a blue verification check mark. That’s it! No one is saying any tweets introduced were false!”

Of course, it goes to the matter of intent, and why the checkmark had been added at a stage of the production of evidence. This complaint was in addition to changing a date for a tweet from 2020 to 2021, and the much more problematic issue of the emotionally charged, selectively edited video on the capitol riots.

“Let’s follow up with a point that you’re making right now about the House managers, as you say, doctoring evidence. And the argument…” she started to ask before being cut off.

‘They didn’t– they didn’t deny it,” he objected.

“To be clear for our viewers,” she stated. It’s a fair point that Zak was attempting to reference what was meant about the “doctored” evidence. It appears that what prompted van der Deen’s explosive media criticism was the broader media context and the coordinated attempt to minimize the complaint. Nevertheless, his media criticism is must-watch.

“They didn’t deny it. I put it in front of them three times,” he rebutted.

“To be clear for our viewers, what you’re talking about now is a checkmark that’s a verification on Twitter that did not exist on that particular tweet, a 2020 that should have actually read 2021, and the selective editing, you say, of the tapes. Is that…” she continued.

“Is that the doctored evidence of what you’re speaking?” she asked.

“I am not a juror in this trial,” Zak said after taking the crossfire. She actually kept her composure for the most part and allowed him to plead his case.

The argument continued until van der Deen actually ripped off his microphone.

“OK, I see you taking off your microphone now. That was President Trump’s defense attorney, Michael van der Veen.”

Talk about dropping the mic.