The Centers for Disease Control and Prevention continues to mislead Americans about the utility of masking schoolchildren. It recently released a study that was based on schools in Arkansas.

“Masks are effective at limiting transmission of SARS-CoV-2, the virus that causes COVID-19, but the impact of policies requiring masks in school settings has not been widely evaluated (2–4),” the CDC claimed while providing weak evidence. “During fall 2021, some school districts in Arkansas implemented policies requiring masks for students in kindergarten through grade 12 (K–12).”

The Washington Post heralded the ‘news’ to once again mislead readers on the purported effectiveness of school masking.

“School districts that required masks this fall saw significantly fewer coronavirus cases than those where masks were optional, according to a large study of Arkansas schools by the Centers for Disease Control and Prevention,” the Washington Post claimed about the single-state report.

“The CDC looked at 233 school districts and found those with mask requirements saw a 23 percent lower incidence of coronavirus cases,” WaPo continued. “Rates in districts with partial requirements — for instance, places that required them in hallways but not classrooms — were in between.”

“Masks remain an important part of a multicomponent approach to preventing Covid-19 in K-12 settings, especially in communities with high Covid-19 community levels,” the study claimed.

Why Arkansas? Because the national data shows decisively that mask mandate policies failed to reduce spread in school systems.

Emily Burns and Joshua Stevenson used a national dataset to issue a study of their own — this one being an actual “large study.” Their findings debunk the sweeping claims being made by the CDC about mask efficacy in schools, while showing readers the data manipulation tricks that the CDC uses to lead less savvy readers to draw false conclusions.

“Since the beginning of the 2021-2022 school year, millions of students across the country have been attending school un-masked,” the authors state. “You’d think the CDC and others would be curious about the difference between masked districts and un-masked districts. Unfortunately, scientific curiosity is no longer a hallmark of the CDC—particularly as it pertains to children and masks.”

“But the data are there,” the authors note. “And as with so much in this pandemic, they tell a story different from the one the CDC is spinning.”

“Burbio.com has been tracking weekly mask status for the 500 largest school districts, comprising approximately 40% of the nations ~51 million public school students,” they continue.

“With these data in hand, the question is, ‘Is there a difference in the case rates between masked and un-masked districts?'”

“While we don’t have access to district level case rates, we can use the pediatric case rates at the county level as a reasonable proxy for the school case rates, as most children in a given county are in public schools, and most counties tend to be either masked or un-masked, not a mixture.”

“The result of that analysis is below,” they state. “As you can see, except for a slight edge in October, masked districts fare 2-4x worse than un-masked districts.” 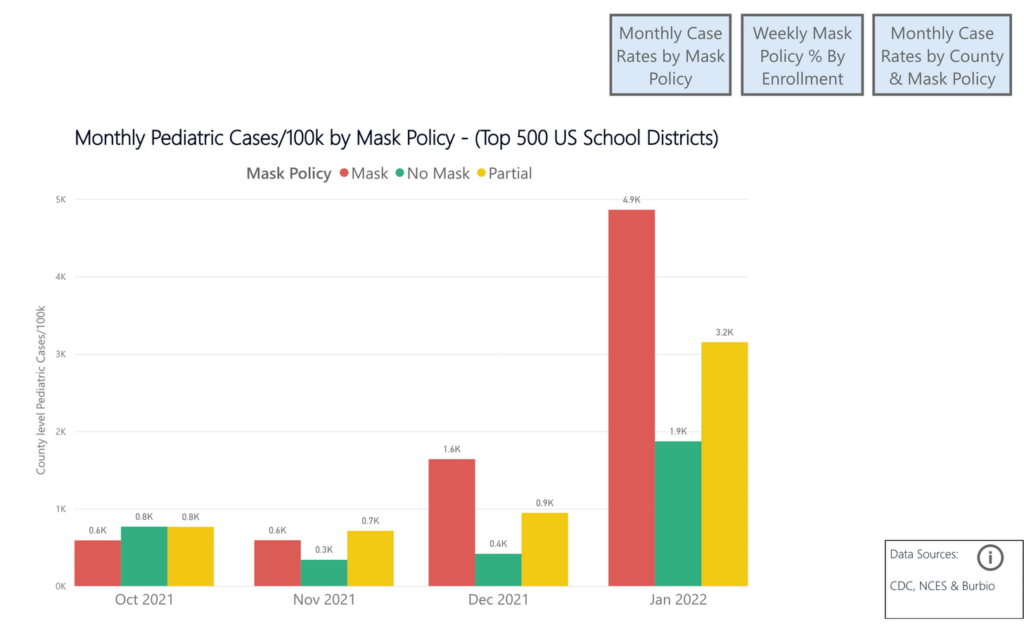 “Why would that be?” the authors asked. Critically, they proceed to show that the data findings that one attains on masks depends heavily on when the data was gathered.

“Well, it’s not really that hard to figure out,” they add. “In October of 2021 Southern states—which were more likely to offer mask-optional instruction—were just finishing up their summer case surge. Maskier Northern states hadn’t yet started their winter case surges. But, once the winter wave started to take off, masked-up Northern states started to perform far worse. Not because masks made it better or worse, simply because they made no difference. Seasonality appears to have a far, far greater impact on case rates than any of the non-pharmaceutical interventions we have employed—and certainly more than masks.”

“Now, if I were using CDC research practices, I would simply ignore the October data I have above, and use the other data where case rates in masked districts sky-rocket during the omicron wave to ‘prove’ that masks make case spread worse,” the continue. “The CDC and others in public health have used this particular trick in countless examples—that is, employing ‘research’ that exploited seasonal differences in case rates—to justify mask mandates and much else.”

“This pattern is remarkably similar to that visible in Emily Oster’s data from the 2020/21 school year, and analyzed by @boriquagato,” they add. “That is, un-masked schools showed higher case rates early in the year, around October, but later in the year, case rates in masked schools vastly outstripped them. According to Emily Oster, ‘We do not find any correlations with mask mandates’.” 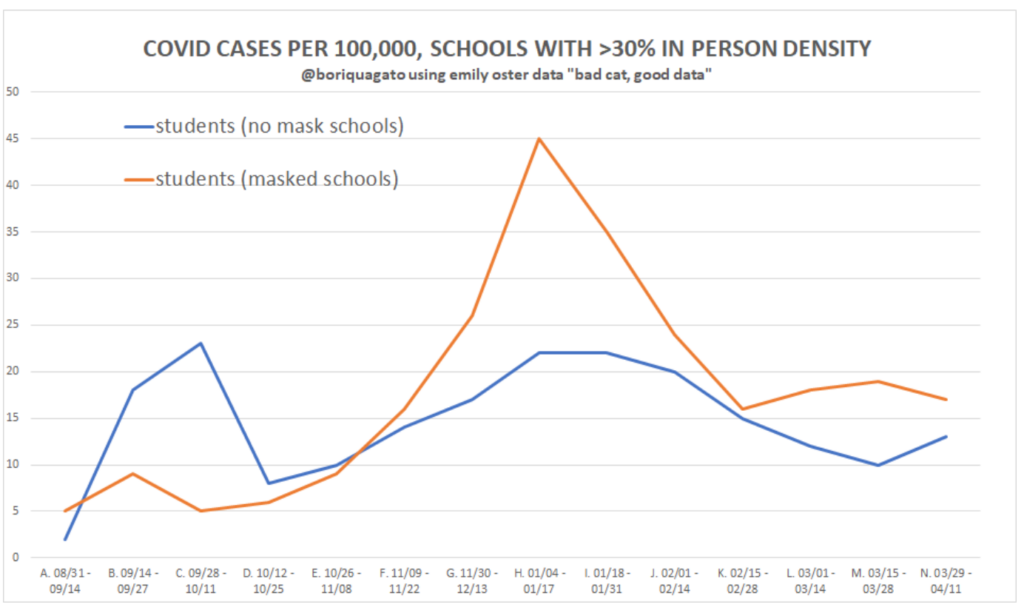 There is a reason that masks do not show a significant impairment of viral transmission: Scientific analysis of cloth and surgical masks show that they do not substantially impair viral particles from penetration.

A newly published scientific study in the peer-reviewed journal Physics of Fluids demonstrates that cloth masks are essentially worthless against viral transmission.

The journal article was produced by British physicists with affiliations at U.K., German, and French universities.

The scientists examined a variety of fabric masks with scanning electron microscopes, thermal imaging equipment, and sophisticated imaging software in order to perform multi-variate analyses of cloth mask performance. The study’s findings were summarized in the Daily Mail.

“Cloth masks do little to prevent the spread of COVID-19, or other airborne diseases, a new study finds,” the Mail notes. “Researchers from the University of Bristol in the United Kingdom found that 90 percent of particles could get through cloth masks, making them effectively useless during the pandemic.”

The Wall Street Journal in January also showed that cloth and surgical masks are ill-equipped to guard against airborne viruses such as Covid-19.

Dr. Scott Gottlieb, the former FDA chief who quickly transitioned after leaving office to become a Pfizer board member, made a confession about cloth masks in early January.

“Cloth masks aren’t going to provide a lot of protection, that’s the bottom line,” he said. “This is an airborne illness. We now understand that. And a cloth mask is not going to protect you from a virus that spreads through airborne transmission. It could protect better through droplet transmission, something like the flu, but not this coronavirus.”

Dr. Leanna Wen, a CNN health analyst, also revealed the facts about masks on the network in December.

.@DrLeanaWen: "Don't wear a cloth mask. Cloth masks are little more than facial decorations. There's no place for them in light of Omicron." pic.twitter.com/Kpoj18sxdi

“Don’t wear a cloth mask,” she said. “Cloth masks are little more than facial decorations. There’s no place for them in light of Omicron.”

In January 2021, CDC Director Walensky explained why the general public should not wear N95 masks for long hours over the course of a day.

It’s important to note that the health experts knew that cloth masks were ineffective all along, but recommended them anyway. It is not just the Omicron variant that the masks don’t stop, but all Covid-19 variants. This has not only been shown repeatedly in terms of international and state-level comparative data, but a Physics of Fluid article published in July 2021 stated as much.

“A total of seven PPE configurations were considered, with the manikin fitted with (i) no mask, (ii) an unvalved KN95 mask, (iii) a typical three-ply blue pseudo-surgical mask, (iv) a three-ply cotton cloth non-medical mask, (v) a 3M R95 particulate respirator (equivalent to N95 for human borne aerosols), (vi) an unvalved KN95 mask with 3 mm gaps around cheeks and nose, and (vii) a KN95 mask with a single one-way valve on the left side,” the physicists stated. “The parameters presented in Table I were kept constant across all cases.”

The filtration efficiency rates are provided below.

“The results… show that the KN95 and cloth masks have the highest pressure drops and resistance coefficients, indicating relatively poor breathability,” the authors conclude. “In comparison, the pressure drop across the R95 mask is approximately 40% lower than that of the KN95 mask, which is significant given a similar level of filtration efficiency. Pressure drop across the surgical mask is comparable to that of the R95, indicating a similar level of breathability and comfort; however, this comes at the cost of significantly reduced filtration efficiency.”

Much like with “lockdowns” failing to reduce Covid-related excess death rates around the globe — now believed to be three times higher than reported case rates — the mask mandates have shown little to no effect on viral transmission. That was the case for every global pandemic before Covid-19 and remains the case after this one.