The Centers for Disease Control updated its childhood mask guidance on Friday in a release that has many parents incensed. The update stipulates that schoolchildren should wear masks and continue to maintain 3-foot social distancing unless fully vaccinated.

“Mask use is recommended for people who are not fully vaccinated including students, teachers, and staff,” the CDC states. “Children under 2 years of age should not wear a mask.”

“In general, people do not need to wear masks when outdoors,” the CDC continued. “However, particularly in areas of substantial to high transmission, CDC recommends that people who are not fully vaccinated wear a mask in crowded outdoor settings or during activities that involve sustained close contact with other people who are not fully vaccinated.”

“Based on the needs of the community, school administrators may opt to make mask use universally required (i.e., required regardless of vaccination status) in the school,” the CDC adds.

“Schools should be supportive of people who are fully vaccinated, but choose to continue to wear a mask, as a personal choice or because they have a medical condition that may weaken their immune system,” the CDC went on. “School administrators will also need to ensure their selected mask use policy does not conflict with local, state, and territorial laws, policies, and regulations.”

“The new federal guidelines aren’t mandatory but are expected to influence school officials, local health departments and governors who are in the midst of preparing for students to return to the classroom full time this fall,” ABC reported.

“Students who are vaccinated don’t have to wear masks in school this fall unless they are riding the school bus or their school decides otherwise,” ABC added about the new guidance.

The risk to children posed by COVID is statistically negligible. A new Wall Street Journal report provides the latest research that this is undeniably the case.

“Children are at extremely slim risk of dying from Covid-19, according to some of the most comprehensive studies to date, which indicate the threat might be even lower than previously thought,” WSJ notes.

“Some 99.995% of the 469,982 children in England who were infected during the year examined by researchers survived,” one study found.

“In fact, there were fewer deaths among children due to the virus than initially suspected,” it continues. “Among the 61 child deaths linked to a positive Covid-19 test in England, 25 were actually caused by the illness.”

“England is a large enough country and it’s had enough Covid, sadly, that we have better data than almost anywhere else in the world on the risks,” said Russell Viner, a professor of adolescent health at the University College London Great Ormond Street Institute of Child Health and senior author on the study.

There are around 100 million American citizens under 18 in the United States. The mortality risk posed to healthy young people is insignificant: The CDC’s numbers show that 331 people under 18 have died with COVID, and it estimated elsewhere that 95% of mortality cases overall are people with serious multiple co-morbidities. This leads to a COVID survival rate in the U.S. of 99.9997%, including the vast majority who are “at risk” due to underlying health conditions.

Futhermore, childhood COVID vaccine administration has been tied by the CDC to rare cases of heart inflammation in young adults. In June, a Centers for Disease Control advisory group released a statement on the ‘likely link’ between COVID-19 vaccinations and heart inflammation in rare cases on Wednesday. In over 300 cases of reported myocarditis or pericarditis, a Pfizer/BioNTech and Moderna COVID-19 vaccination preceded the heart condition.

The COVID-19 Vaccine Safety Technical (VaST) Work Group noted the adverse reaction in vaccinated males between the ages of 16 and 24. The development of the heart condition was observed in adolescents and young adults and was considerably higher after the second dose in males.

The medical risk breakdown is shown below: 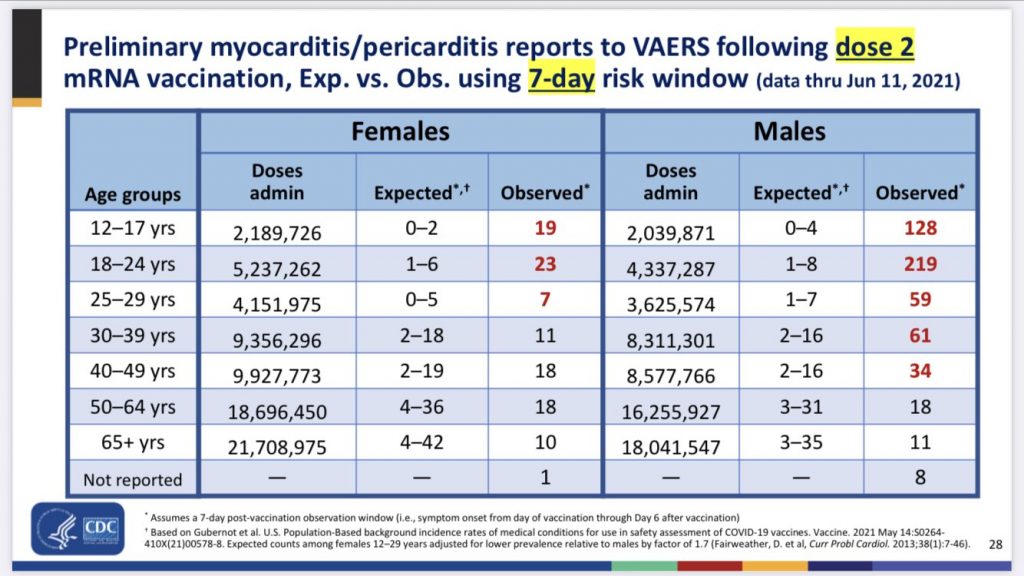 The lockdowns and mask mandates have caused lasting damage to children’s education, in what the Washington Post called a “lost generation.”

“After the U.S. education system fractured into Zoom screens last spring, experts feared millions of children would fall behind,” the Post states. “Hard evidence now shows they were right.”

Forcing children to wear masks, socially distance and participate in distance learning is also taking a psychological toll. In October, the Annual State of Mental Health in America showed that anxiety and depression nationwide had hit an all-time high, and was hitting ‘young people the hardest.’

While many are concerned that the Delta variant may lead to a repeat situation for the country, it has proven to be even less deadly than the first wave of COVID for all demographics. It has a case survival rate of 99.9% according to NHS official figures.

All things considered, therefore, the masks may be doing more damage to children’s health than COVID would even if they were infected. A lab analysis from the University of Florida showed 11 dangerous pathogens on masks worn by children for just eight hours.

A newly-released study published in the Journal of the American Medical Association Pediatrics found that carbon dioxide in masks were at unhealthy levels for children.

“The results found an average of 13,120 and 13,910 parts per million of carbon dioxide in the air inhaled by children while wearing surgical and filtering masks, respectively,” the report said. “Under German law, the carbon dioxide contents of a closed room cannot exceed 2000 ppm, more than six times less than the masked children were inhaling.”

“The results also found that carbon dioxide levels tended to increase the younger the children were, with one 7-year-old’s levels measured at 25,000 ppm,” it continued. “The authors claim that most of the complaints made by children about wearing masks can be explained by increased carbon dioxide levels.”

Mask mandates do not appear to have an appreciable effect on COVID-related case rates or death rates. A recent CDC study showed they have 0.9%-1.9% effect on case rates if used for 100 days. This is miniscule, and in regards to children, statistically inconsequential.

A number of academic studies and macro-analyses of state cases show no statistically significant difference in COVID cases between states with mask mandates and those without.

“Case growth was not significantly different between mandate and non-mandate states at low or high transmission rates, and surges were equivocal,” the authors found.

A number of states have banned childhood mask mandates in schools, including Iowa, South Carolina, and Florida. These states have seen no subsequent difference in childhood COVID rates. States that repealed mask mandates and social distancing rules entirely, such as Texas and Florida, have also seen no statistical difference in case rates or deaths.