‘The City’s Case Against Us is Crumbling’: NYC Retreats on Firing 4,650 NYPD Who Refused the Jab as Crime Surges

New York City is retreating on vaccine mandates, but only out of dire necessity. As the nation’s largest city comes into the grips of a violent crime wave that includes mass shootings, there comes a report that the mayor plans to shelve the plan to fire thousands of police officers who either refused to get the Covid-19 vaccine or to report their status to their employer.

The New York Post reported that the city’s vaccine mandate has been put on “pause.” The NYPD stands to lose nearly 5,000 cops and city employees if the mayor’s office stubbornly enforces the mandate for a vaccine that has utterly failed to stop the spread of the coronavirus.

The Post reported that 91 percent of the city’s police force and staff are vaccinated, citing City Hall. That would leave an estimated 4,659 NYPD employees who are unvaccinated or refused to comply with vaccination status reporting by the deadline of Oct. 29.

“In a nutshell, no decisions will be made, no further members will be forced to leave until further notice,” a veteran NYPD sergeant told the Post. “There hasn’t been any memo, just basically keep everything status quo and if issues arise we will revisit it down the road.”

Michael Kane, head of Teachers for Choice, told the New York publication that the group has been fighting the COVID vaccine mandates. Kane lambasted the double standards, such as Mayor Eric Adams’ ‘exemption’ for professional athletes.

“It seems that they need to do it because there’s basically a crime wave in New York City,” he continued. “They’re going to be laying off cops, firing cops, trying to pressure and coerce them to get a shot? Tons of them are retiring. Especially for this new mayor, who wants to be the law and order Mayor. He’s kind of stuck.”

He added that the mandates were not Mayor Adams’ program, but “the de Blasio legacy … I feel like the city’s case against us is crumbling.”

New York’s City Hall denied that there was any official changes in vaccine mandate enforcement, however.

“We have not had any staffing challenges due to the mandate and it remains in effect. Terminations continue on a rolling basis,” City Hall spokesman Jonah Allon told The Post.

New York would unofficially be following in the footsteps of Chicago, whose Mayor Lori Lightfoot has conceded that mass firings would not result from the city’s vaccine mandate.

“We will enforce the rules,” Lightfoot said in March. “And my expectation is that the vast majority of police officers who are already vaccinated, will come into compliance.”

“We’re not doing mass firings today, which is one of the things a lot of folks have been propagating,” Lightfoot added. “That’s not going to happen. We’re looking at the numbers we started to see last week and over the weekend. A number of people going to the portal were reporting that in fact they are vaccinated.”

PBS Chicago reported that “data released by the mayor’s office disclosed that Lightfoot — while ramping up her re-election bid — agreed to exempt at least 1,439 officers from the COVID-19 vaccine mandate.”

“The decision to exempt at least 11.5% of the Chicago Police Department from her vaccine mandate will mean Lightfoot will not have to ask Chicagoans for a second term in office while moving to fire thousands of Chicago Police officers at a time when polls repeatedly show public safety is voters’ biggest concern,” the report added.

Chicago has also been experiencing a major spike in violent crime that comes after mass departures from the force in subsequent years stemming back to the “Defund the Police” movement. The CPD reports that hundreds more officers have left the Chicago police force than joined since 2019, per ABC News. 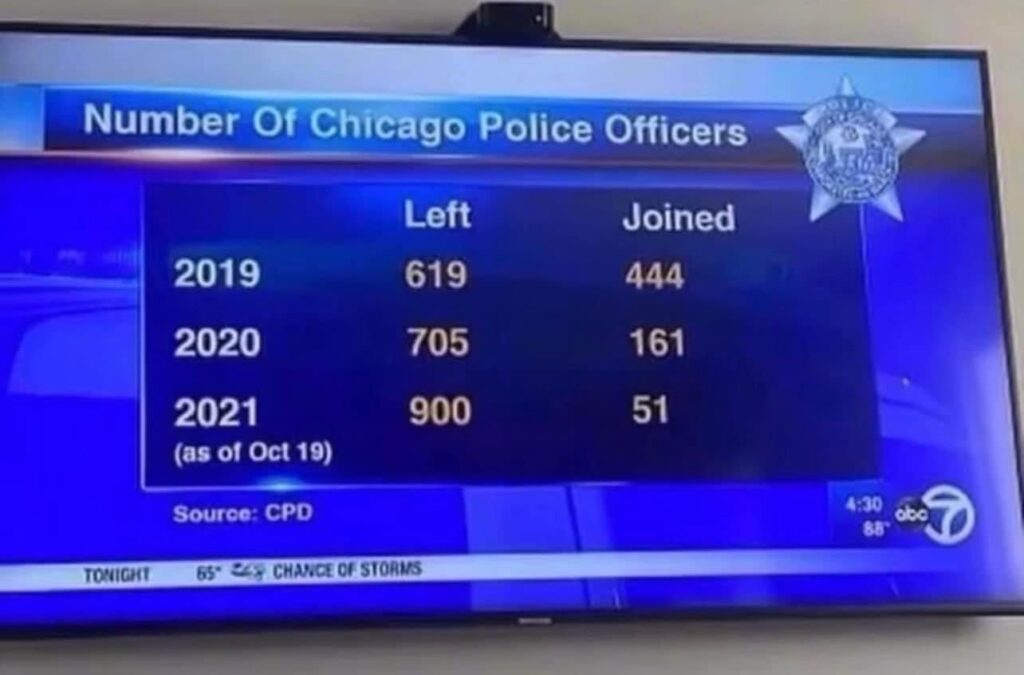 Los Angeles has been enforcing its vaccine mandate, but thousands of medical exemption applications submitted by LAPD officers are still pending.

“About 83% of the department is fully vaccinated, 0.4% is partially vaccinated and 16.2% is not vaccinated,” ABC News reported in March. “More than 2,000 exemptions are pending. Medical exemptions are available to people who tested positive for COVID-19 recently, as those individuals get a 90-day exemption.”

California counties nearby, meanwhile, have been poaching LAPD officers who refused to comply with the vaccine mandate.

“Drive north, we have a place for you … Kern county is a community that backs the blue,” the minute-long ad says as country singer George Strait sings The Weight of the Badge, a song paying tribute to police.

But perhaps the strongest push to recruit unvaccinated police officers from areas of the country where there are vaccine mandates has come from Florida Governor Ron DeSantis.

The governor announced in October that officers who refused to comply with the vaccine mandates could come to Florida and get $5,000 cash bonuses if hired. Tennessee Gov. Bill Lee followed suit in November.

DeSantis specifically mentioned the New York City, Chicago, Minneapolis, and Seattle police departments as possible targets for recruitment. It appears that those cities got the message, as well as the politicians who disregarded public safety to push a pro-vaccine agenda.