“The Most Popular Republican in Georgia”: Poll Touting Brad Raffensperger is Bad News — For the GOP 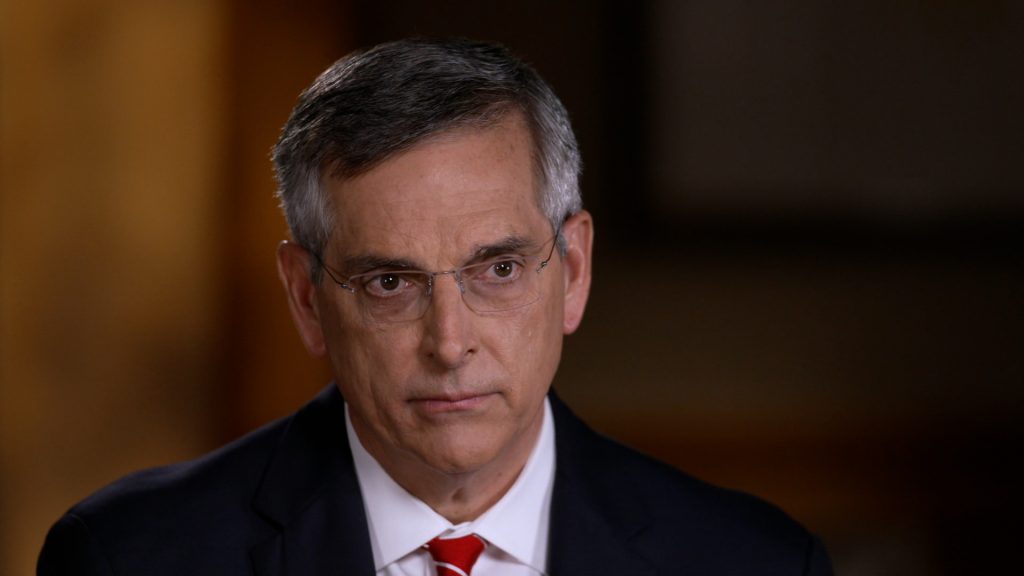 It is a name that gives many Republicans nightmares about the Georgia election: Brad Raffensperger.

The Secretary of State presiding over one of the messiest 2020 election races in the nation is now being held aloft as a triumphant figure who weathered a veritable storm of false accusations and reckless charges.

A surprising new AJC poll positions Raffensperger as “the most popular Republican in Georgia”:

Consider the fact that Secretary of State Brad Raffensperger’s 47% statewide approval rating topped that of Gov. Brian Kemp, former president Donald Trump, or even the statewide GOP, despite (or maybe because of) Raffensperger’s months-long cage match with Trump over Georgia’s election results.

The newspaper is hardly subtle in containing its exuberance over an election that is nearly two years away. This is how AJC breathlessly puts it:

Republicans are in trouble entering the 2022 election season. That’s the straightforward takeaway of the Atlanta Journal-Constitution poll published over the weekend.

However, the takeaway is far from as straightforward as the headline suggests. Scroll down to the fine print:

The big rub for the number-crunching conservative: He’s more popular with Democrats, who give him a 60% approval rating, than he is with his own Republicans. Just 45% of GOP voters say they’re happy with the job Raff has done.

The Atlanta Journal-Constitution then mentions that while Raffensperger intends to run again in 2020, the field that would oppose him is far from set. It lists these potential challengers as, “Rep. Vernon Jones, who recently formally switched to the GOP after months of stumping for Trump; and state Sen. Brandon Beach, an Alpharetta Republican recently demoted for supporting Trump’s lies about election fraud.”

That’s quite the mouthful for a pollster to call “lies” the numerous irregularities that swirled around the Georgia race, including a video from Fulton County Arena that was not “debunked.” If anything the “fact checks” of the video corroborated the key claims that votes were counted in an unauthorized fashion. The spike for Biden that put him over the top in Georgia roughly coincided with the processing of those votes.

There is another nugget from the poll that is worth highlighting: Georgia Governor Brian Kemp is in dire straits.

On the cusp of a tough reelection battle, Gov. Brian Kemp’s approval rating stands at just 42% — and his disapproval is at 51%. More than one-third of Republicans, 36%, disapprove of his performance. That’s more than quadrupled from the 8% of Republicans who held a dim view of Kemp in the AJC’s January 2020 poll.

CNN has made Raffensperger into a quasi-sympathetic figure due to its ridiculous paeans to the Secretary of State, who has been described as a hero for purportedly standing up to Donald Trump and Lindsey Graham.

“Georgia Secretary of State Brad Raffensperger, a longtime Republican, has spent the last two months standing up to intense and highly public pressure from members of Congress, who urged him to throw out legally cast ballots, and from President Donald Trump, who asked him to ‘find 11,780 votes’ to change the outcome of the election,” the networked fawned.

The issue here is that an examination of the full transcript of the calls show that the pressure was for all of the legal votes to be counted, and for all the illegal votes to be discounted. Period.

Firstly, there is what Donald Trump actually said to Raffensperger:

The former president made a number of plausible claims of election irregularities, along with some wild claims. But this is the bottom line: He was pressuring Raffensperger to tell “the truth” about the election.

Then there is the drama involving Senator Lindsey Graham of South Carolina. Raffensperger trumped up the supposed controversy:

“But then Senator Graham implied for us to audit the envelopes and then throw out the ballots for counties who have the highest frequency error of signatures. I tried to help explain that because we did signature match, you couldn’t tie the signatures back anymore to those ballots.”

This is disingenuous. Rather, because Georgia did a questionable “signature match” you could no longer trace back ballots to the voters, once counted.

If swing states push hard for mass mail-in ballots in 2022, voters will know that the unlawful election changes in 2020 had nothing to do with the pandemic, but was rather to make the elections less transparent and harder to audit. Governors and secretaries of state that preside over dubious election practices should be removed from office at the nearest possible convenience.