The NIH has demanded that EcoHealth Alliance, the third-party ‘non-profit’ that funneled the money to the Wuhan lab come clean about the research that was actually taking place. The admission was noted by Board of Governors Professor of Chemistry and Chemical Biology Richard H. Ebright.

But Ebright points out that NIH knew about the documents in 2018 and reviewed them repeatedly.

“The NIH received the relevant documents in 2018 and reviewed the documents in 2020 and again in 2021,” Ebright said. “The NIH–specifically, Collins, Fauci, and Tabak–lied to Congress, lied to the press, and lied to the public. Knowingly. Willfully. Brazenly.”

The letter that the NIH provided to Rep. James Comer (R-KY) can be read in full below. 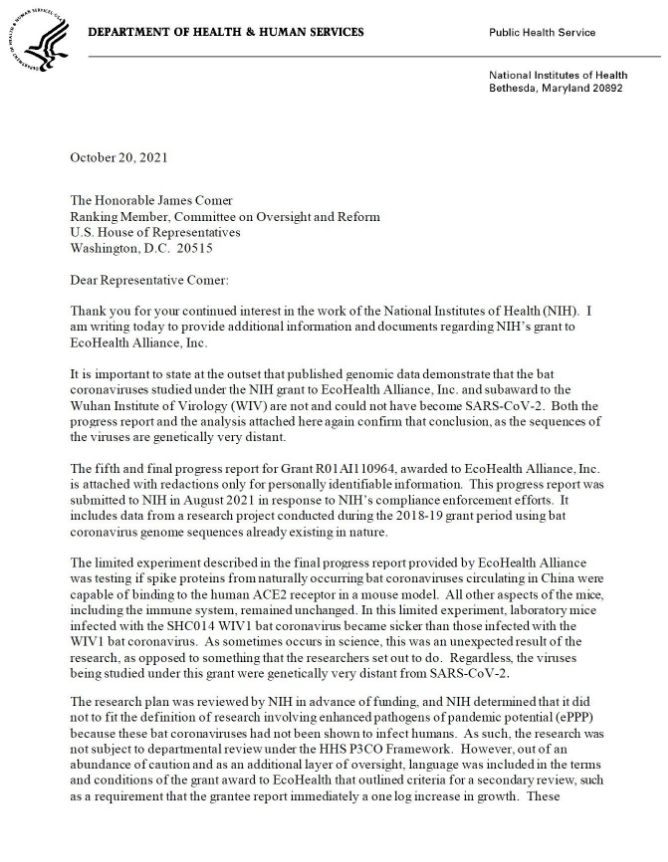 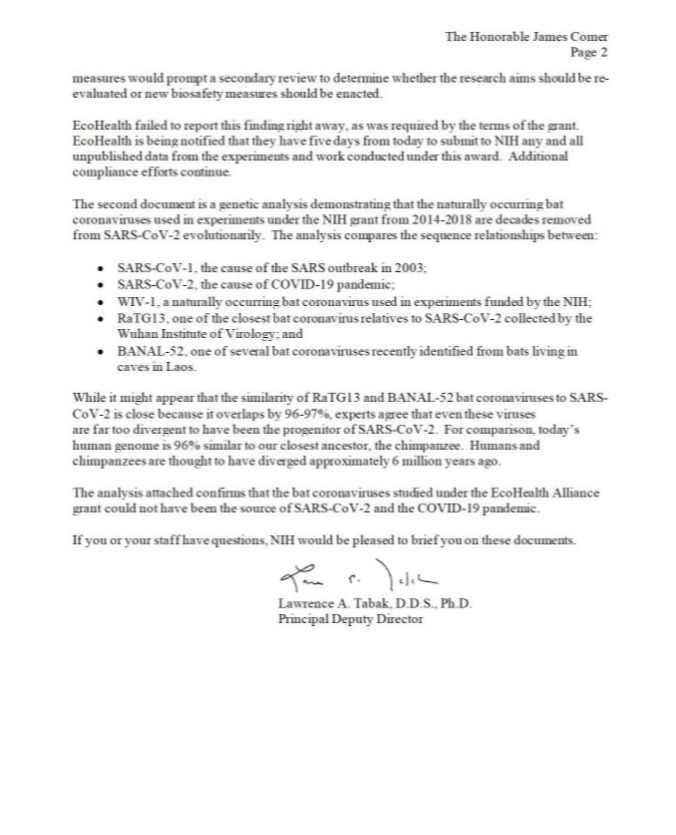 The NIH letter is defensive in tone and obscures that Dr. Anthony Fauci and Dr. Francis Collins both misled the American public about the nature of the research done at the Wuhan Institute of Virology. Furthermore, they claim to have more knowledge about the type of research conducted at the Wuhan lab than is suggested by their statements and by the the letter itself.

Rep. Mark Meadows highlighted one exchange between Dr. Fauci and Sen. John Kennedy that shows that the NIAID Director lied to Congress.

This clip of @SenJohnKennedy questioning Dr. Fauci in May on ‘gain of function’ research is suddenly worth a re-watch.

Dr. Fauci has some explaining to do. pic.twitter.com/3vFZYXHpS9

Earlier in October, an unearthed grant proposal by EcoHealth Alliance showed that it intended to create a ‘new coronavirus’ at the Wuhan Institute of Virology.

The Telegraph contacted a pandemic expert with the World Health Organization who commented on the finding, noting that the research would result in a virus that had no clear ancestor in nature.

Explaining the proposal, a WHO collaborator, who has asked not to be named for fear of reprisals, said: “This means that they would take various sequences from similar coronaviruses and create a new sequence that is essentially the average of them. It would be a new virus sequence, not a 100 per cent match to anything.

“They would then synthesise the viral genome from the computer sequence, thus creating a virus genome that did not exist in nature but looks natural as it is the average of natural viruses,” the researcher said.

“Then they put that RNA in a cell and recover the virus from it,” the researcher added. “This creates a virus that has never existed in nature, with a new ‘backbone’ that didn’t exist in nature but is very, very similar as it’s the average of natural backbones.”

The Telegraph notes that although Dr. Peter Daszak’s proposal was rejected, it is impossible to know what research was conducted at the Wuhan laboratory:

Although the grant proposal was rejected in 2018, the Wuhan database of viral strains was taken offline prior to the Covid outbreak some 18 months later, meaning it is impossible to check which viruses the team was working on or had created. Wuhan scientists have consistently denied creating Sars-CoV-2 in a lab.

“If Sars-CoV-2 comes from an artificial consensus sequence composed of genomes with more than 95 per cent similarity to each other… I would predict that we will never find a really good match in nature and just a bunch of close matches across parts of the sequence, which so far is what we are seeing,” the WHO source said.

“The problem is that those opposed to a lab leak scenario will always just say that we need to sample more, and absence of evidence isn’t evidence of absence,” the researcher added. “Scientists overall are afraid of discussing the issue of the origins due to the political situation. This leaves a small and vocal minority of biased scientists free to spread misinformation.”

In September, documents were obtained that revealed the National Institute of Allergy and Infectious Disease, headed by none other than Dr. Anthony Fauci, funded the U.S.-based non-profit EcoHealth Alliance to perform “high-risk” research at the Wuhan Institute of Virology in China.

The Kentucky senator warned the doctor about the criminal implications of lying to Congress before confronting him on evidence that NIAID had indeed funded ‘gain of function’ research at the Wuhan Institute of Virology in China, which some believe to be the source of the COVID-19 outbreak.

“These experiments combined genetic information from different coronaviruses that infect animals, but not humans, to create novel artificial viruses able to infect human cells,” Paul added. “Viruses that in nature only infect animals were manipulated in the Wuhan lab to gain the function of infecting humans. This research fits the definition of the research that the NIH said was subject to the pause in 2014-2017, a pause in funding on gain of function.”

“But the NIH failed to recognize this defines it away, and it never came under any scrutiny,” he continued. “Doctor Richard Ebright, a molecular biologist from Rutgers described this research in Wuhan as ‘The Wuhan lab used NIH funding to construct novel, chimeric SARS-related coronaviruses able to infect human cells and laboratory animals. This is high-risk research that creates new potential pandemic pathogens, potential pandemic pathogens that exist only in the lab, not in nature. This research matches — these are Dr. Ebright’s words — this research matches, indeed epitomizes, the definition of gain of function research done entirely in Wuhan, for which there was supposed to be a federal pause. Dr. Fauci, knowing that it’s a crime to lie to Congress, do you wish to retract your statement of May 11th where you claimed that the NIH never funded gain of function research in Wuhan?” he asked.

“Senator Paul, I have never lied before the Congress and I do not retract that statement,” Fauci denied. “This paper that you’re referring to was judged by qualified staff up and down the chain as not being gain of function.”

The truth has finally come out. And Dr. Rand Paul had a response to the NIH’s admission: “‘I told you so’ doesn’t even begin to cover it here.”