The National Collegiate Athletics Association has a stunning announcement to make: Natural immunity is real and the sports association will recognize when individuals attain it from a prior infection.

It should be noted that this is only “stunning” to people who have only been reading the mainstream media and denying that it exists. However, the NCAA recognizes that a person who has natural immunity is the equivalent of someone who has been “fully vaccinated” (forcibly or otherwise.)

“The NCAA has released updated guidance for winter sports competing during the COVID-19 pandemic,” the official website stated. “The 2022 Winter Training and Competition document follows recent updates by the Centers for Disease Control and Prevention, including recommendations for quarantine and isolation. The updated guidance addresses broad considerations that differentiate COVID-19 management in Tier 1 individuals based on vaccination and other immunity considerations.”

“For purposes of the winter guidelines, the NCAA COVID-19 Medical Advisory Group has developed a definition of ‘fully vaccinated’ that considers both vaccination status and other immunity factors that may impact risks for Tier 1 individuals, including student-athletes and coaches. Those considered fully vaccinated include people”:

“A person who has had a documented COVID-19 infection in the past 90 days is considered the equivalent of ‘fully vaccinated’.”

Scientific research has established that natural immunity exists and it provides ample protection against Covid; in some cases, multiple variants. A widely cited Israeli study earlier showed “natural immunity confers longer lasting and stronger protection against infection, symptomatic disease and hospitalization,” which was more recently replicated in an independent study.

A recent study published in the European Journal of Immunology showed natural immunity is superior to vaccinated immunity and is longer-lasting.

“Most subjects develop antibodies to SARS-CoV-2 following infection,” the study states. “In order to estimate the duration of immunity induced by SARS-CoV-2 it is important to understand for how long antibodies persist after infection in humans... We found that NAb  [natural antibodies] against the WT virus [B-lineage variants] persisted in 89% and S-IgG in 97% of subjects for at least 13 months after infection.”

“Previous infection with SARS-CoV-2 has shown to induce effective immunity and protection against reinfections in most individuals,” the study says. “In animal studies, a protective antibody titer against SARS-CoV-2 infection has been suggested to be low. Higher IgG antibody levels against SARS-CoV-2 among healthcare workers within three months after vaccination were found to be associated with lower infectivity. However, a protective threshold for humans is still under debate and subject to the standardization of serological methods. The accumulating research data on the persistence of antibodies after natural infection, and NAbs in particular, will provide important insight into estimating for how long antibodies induced by Coronavirus disease 2019 (COVID-19) vaccination can be expected to persist and provide protection against emerging SARS-CoV-2 variants.”

It is important to note that the Centers for Disease Control and Prevention refuses to accept the presence of antibodies as a demonstration of natural immunity to Covid-19. The CDC insists on every eligible person getting vaccinated, regardless of prior infection.

There is no credible scientific reasoning provided — only an appeal that it is hard to test for the specific antibodies provided by the “vaccines.”

Additionally, the CDC itself claims that there have been 146.6 million prior infections in the United States (as of October 2). Based on its calculation and the current reported 52 million “cases,” this would put prior infections and natural immunity at over 200 million people. 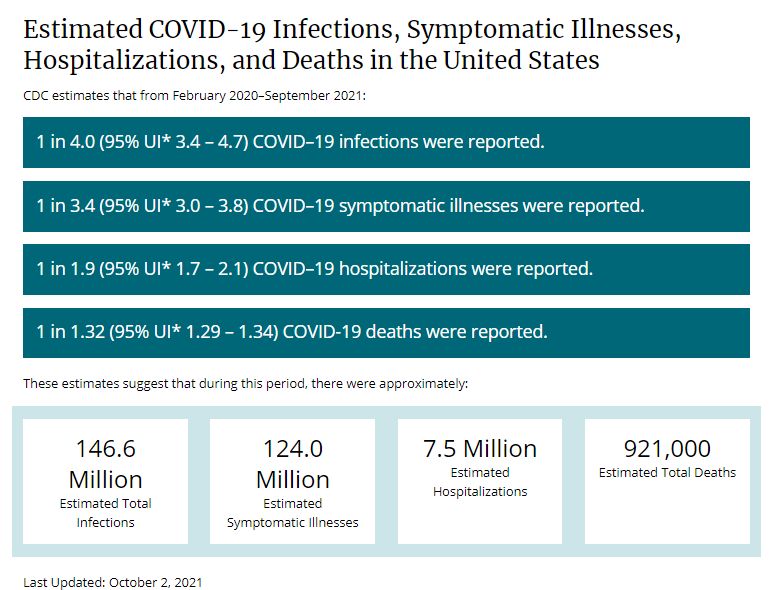 The Mayo Clinic once considered 200 million Americans with vaccinated or natural immunity to be sufficient to claim “herd immunity.”

The NCAA recognizing natural immunity from prior infection goes a long way to puncture the bubble that it doesn’t exist. How can vaccine passports be justifiable when vaccines don’t stop the spread and around 200 million have superior antibodies that lasts longer?

If the science actually mattered, and not the political strong-arming, then natural immunity would count as equal or superior to vaccinations. The NCAA has at least recognized it, which is a modest start.