The U.S. Military Sent a Little Message on the Bomb They Delivered to Terrorists in Afghanistan 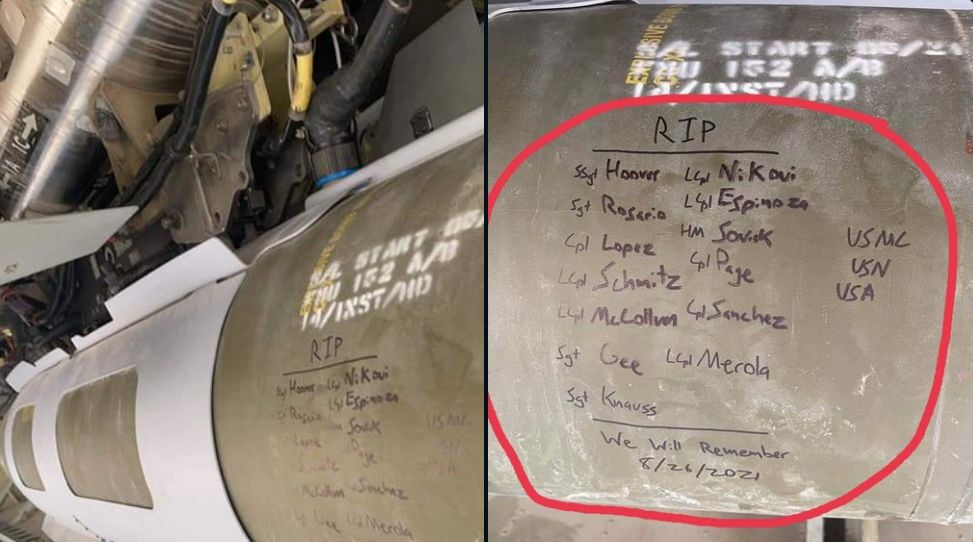 “There were few initial details about the incident, as well as a rocket that struck a neighborhood just northwest of the airport, killing a child,” the report continued. “The two strikes initially appeared to be separate incidents, though information on both remained scarce.”

Taliban spokesman Zabihullah Mujahid earlier said in a message to journalists that “the U.S. strike targeted a suicide bomber as he drove a vehicle loaded with explosives,” the AP added.

“Two American military officials, who spoke on condition of anonymity to discuss military operations, called the airstrike successful,” the report added. “They said the strike caused ‘significant secondary explosions’indicating the presence of a substantial amount of explosive material in the vehicle.”

Multiple military sources report that the service members left a message for the terrorists on the bomb they would later drop.

The message is a simple but effective one: “RIP” and the last names of the 13 service members who were killed in Afghanistan on Thursday. It adds the military branches: “USMC, USN, USA.”

The full names of those killed in the attacks in Afghanistan are listed below:

President Biden earlier announced that he had authorized a strike against two “high profile” ISIS-K “planners” who were allegedly involved in the suicide bomb attack that killed 13 U.S. servicemembers on Thursday. He promised that more retaliatory strikes would be forthcoming.

“This morning, I met with my national security team in Washington and my commanders in the field. We discussed the strike that U.S. forces took last night against the terrorist group ISIS-K in Afghanistan,” Biden’s statement said. “I said we would go after the group responsible for the attack on our troops and innocent civilians in Kabul, and we have,” he claimed.

“This strike was not the last,” he said. “We will continue to hunt down any person involved in that heinous attack and make them pay. Whenever anyone seeks to harm the United States or attack our troops, we will respond. That will never be in doubt. I thanked General McKenzie for his leadership of that mission, and for his commitment to the safety of our troops in Afghanistan.”

“The situation on the ground continues to be extremely dangerous, and the threat of terrorist attacks on the airport remains high,” he continued. “Our commanders informed me that an attack is highly likely in the next 24-36 hours.”

That indeed turned out to be the case, based on reports out of Afghanistan on Sunday morning. Earlier on Sunday, in an unrelated incident, a rocket attack was reported in Kabul.

“Local media in Afghanistan reports there’s been an explosion in Kabul,” Alex Salvi reported. “Witnesses say the blast is from a rocket that struck a residential building.”

The aftermath of the blast was captured on video. The explosion was reported to have been near al-Shaheed road, about 3 kms from Kabul airport.