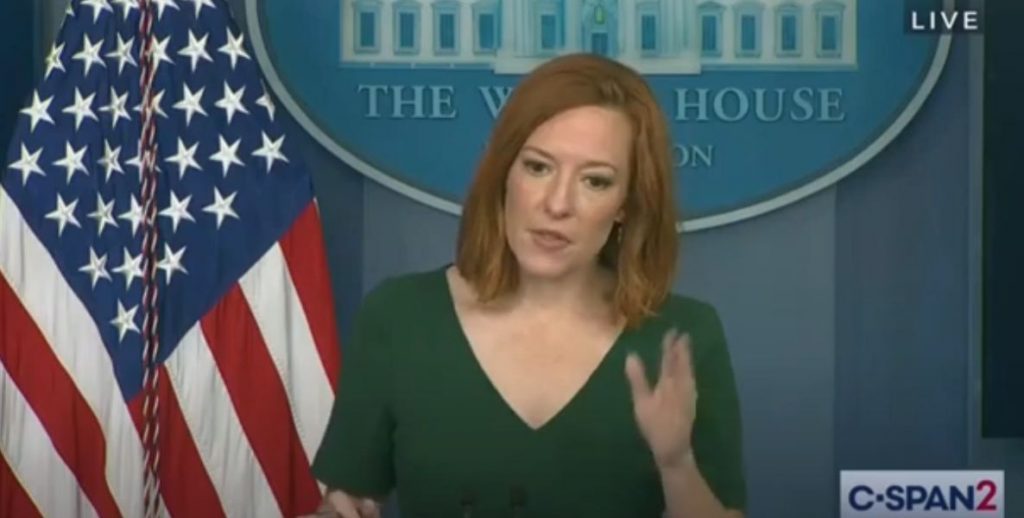 The White House has finally reacted to the explosive Fauci emails that were recently disclosed by the Washington Post and Buzzfeed, accompanied by a mainstream media cover-up of what is actually contained in them.

On Thursday, after zero questions from the lamestream press on the emails on Wednesday, the subject was finally broached with White House Press Secretary Jen Psaki.

“And then going to the emails of Dr. Fauci, there was an exchange between Dr. Collins and Dr. Fauci referencing a Fox News report, discussing basically the lab leak as a conspiracy,” a reporter asked. “Collins denied, you know, jumping to conclusions and he asserted that his mention of conspiracies was referring to the thought, the rumor that the virus was engineered, bioengineered as a weapon. Is that the position of the administration and their top health experts, that this was not engineered? Or is that still an open question and part of this review?”

“Well, I think we’ve spoken to this pretty extensively from here,” Psaki said. “Let me just say, on Dr. Fauci and his emails, he has also spoken to this many, many times over the course of the last few days and we will let him speak for himself.”

“We will let him speak for himself.” This is an ominous line for a doctor who was brought over as a Trump holdover and who was once the darling of both Democrats and the mainstream media complex the party effectively runs.

It is also somewhat of a mystery how Fauci’s emails went through the FOIA process. This is the same U.S. government that obstructed obtaining thousands of former Secretary of State Hillary Clinton’s emails, which she believed were destroyed with BleachBit.

“And he’s been an undeniable asset in our country’s pandemic response, but it’s obviously not that advantageous or me to re-litigate emails from 17 months ago,” Psaki continued. “We’ve launched, based on the President’s direction, an entire internal review process to use all of the resources across the government to get to the bottom of the origins, and that’s 100-day process and we will look forward to providing more on this — or 90-day, sorry — when it’s concluded.”

This is kicking the can down the road to when the subject matter has ‘cooled off,’ from a White House press relations point-of-view. But the heat is now very much on Dr. Fauci, who has recently stumbled in interviews addressing basic questions raised by his emails.

On Wednesday, Fauci did a couple of interviews to attempt to quell the brewing public furor. His late night interview with The Donlon Report on NewsNation, guest-hosted by former Fox News anchor Leland Vittert, is of particular interest. The interview was noted and screengrabbed by MRC:

Dr. Fauci prefaced his responses on the grounds that the emails “are really ripe to be taken out of context where someone can snip out a sentence in an e-mail without showing the other e-mails.”

The most noteworthy bits have to do with two exchanges regarding Fauci’s emails. The first is regarding the controvesy over the public wearing of common masks to prevent the transmissibility of SARS-CoV-2 virus from one host to another.

A brief overview of the email for the “context” the Fauci demands in discussing such matter is laid out in a post at the National Pulse. The email shows Dr. Fauci’s response to an Obama staffer about wearing masks diverges from what the public was subsequently told. It is available in full below:

Masks are really for infected people to prevent them from spreading infection to people who are not infected rather than protecting uninfected people from acquiring infection. The typical mask you buy in the drug store is not really effective in keeping out virus, which is small enough to pass through the material. It might, however, provide some slight benefit in keep out gross droplets if someone coughs or sneezes on you. I do not recommend that you wear a mask, particularly since you are going to a vey low risk location. Your instincts are correct, money is best spent on medical countermeasures such as diagnostics and vaccines.

Fauci later remarked about the mask email: “It is a complicated issue.” But the response that the National Institutes of Health director gave on the Wuhan laboratory is even more concerning. The doctor appeared to be at a loss for Vittert’s pressing of Fauci on how one could trust the Chinese government to be forthright about the military applications of the gain-of-function research being carried out in the laboratory.

Dr. Fauci once again asked for things to be ‘put in context,’ while insisting that the Chinese scientists that were working on the coronavirus research were “credible” and “trusted.”

Vittert rightly pushed past this response as if it were missing the point. The following is a transcript of the back-and-forth.

“Oh, the military has nothing to do with this,” Vittert continued. “We should believe them.”

“No,” Fauci reiterated. “What I’m — what I’m saying is that we have very many years of experience of productive interaction with Chinese scientists. For example, Dr. George Gal who’s the director of the Chinese CDC, has been a colleague for many years. He’s a member of the United States National Academy of Sciences. Number one, number two, the science is there and others that we dealt with — with the original SARS, with the influenza virtually every year. The scientists are experienced with them.”

Vittert dismissed the defense and stated “all of the comments that were made about what happened inside that lab are based essentially on taking the Chinese word for it” and “it seems pretty clear that the Chinese lied about a number of things[.]”

It was not only the Chinese that did the lying, as Fauci’s emails reveal. The White House is smart not to touch the suddenly toxic Dr. Fauci with a ten-foot-pole.