There was Another Mass Shooting in America. You Didn’t Hear About It Because the Suspect is a Chinese Communist

President Biden is rushing off to Buffalo, apparently to console the families and local community impacted by the heinous mass shooting that took the lives of ten people on Sunday. It is a rare in-person visit from a president whose administration has overseen an explosion of violent crime.

The Buffalo mass shooting is being labeled a “hate crime,” due in part to the racial motivation of an 18-year-old with a bizarre radicalized worldview that purportedly includes an authoritarian leftist past and white nationalist bent. The suspect Payton Gendron has described himself as being “mild-moderate authoritarian left.” These inconvenient facts have not stopped departing Congresswoman Liz Cheney from getting in a petty cheapshot that House GOP leaders purportedly ‘enabled white nationalism.’

If anything, the known facts of the Buffalo case demonstrate the left’s argument that ‘white nationalism’ is the exclusive purview of the far-right rests on feet of clay. The shooter even appeared to wear the same Sonnenrad (or ‘Black Sun’) symbol on his chest as the neo-Nazi battalion Azov. It is further demonstration that the ideological boundaries that the media use to keep people divided are not entirely reflective of political reality.

This is Payton Gendron, the Buffalo shooter. Pay attention to the symbol on his chest. It's used by the Azov Battalion in Ukraine. pic.twitter.com/IIy2NGtq3u

Left-wing pundits have also desperately tried to rope in the Kyle Rittenhouse case, despite his acquittal for acting in self-defense and the attackers he shot being white.

The shooting in Buffalo is the result of Fox News and the GOP praising Kyle Rittenhouse as a “hero” for shooting 2 innocent people — to death — and facing no legal consequences. It’s the result of Rittenhouse getting to meet the President at Mar-A-Lago to celebrate his acquittal.

This Buffalo shooting is part of the Rittenhouse Effect we have warned people about https://t.co/sm7VwjZCmJ

The same media that ignored the Bernie-backing, explicitly anti-Trump views of a mass shooter who actually tried to kill Republican Congressmen is even weaponizing the Buffalo shooting to attack Tucker Carlson (although the suspect was far from being a fan of Fox News).

Thus, the Buffalo shooting was tailor-made to further the narrative that white supremacists are an existential threat to America, and thus, civil rights such as free speech must be curbed to stop this ideology from spreading. The radical left immediately seized on the opportunity to make a lone incident reflective of numerous other incidents that it had nothing in common with — all to smear political enemies.

The Buffalo shooting could more accurately be described as another missed case of glaring mental illness combined with the F.B.I. once again dropping the ball.

“New details have emerged regarding the alleged threat that accused Buffalo mass shooter Payton Gendron made in June 2021, leading the teenager to undergo a required mental health evaluation at a local hospital,” Fox News reported on Monday.

Sadly, the American people are no longer surprised by such F.B.I. incompetence and malfeasance. Reports about the agency’s corruption and hyper-politicization under Attorney General Merrick Garland are commonplace.

It thus appears to be lost on many people that there was another mass shooting in America on Sunday. It happened at a church in Laguna Woods in Orange County, California. It claimed the life of one person and wounded five others.

The Orange County Sheriff’s Department tweeted the known facts about the mass shooting on Monday.

“The Laguna Woods church shooting investigation has continued through the night. Teams continue to process the scene,” the sheriff’s department said.

“The suspect in the Laguna Woods church shooting has been identified as David Chou, 68 years old, of Las Vegas, NV,” the sheriff’s department added. “He has been booked on one felony count of murder and five felony counts of attempted murder. More info to follow at todays press conference.”

The U.S. media have written vague headlines about the church shooting while noting that the incident was a “hate crime,” but that does not do the atrocity justice. 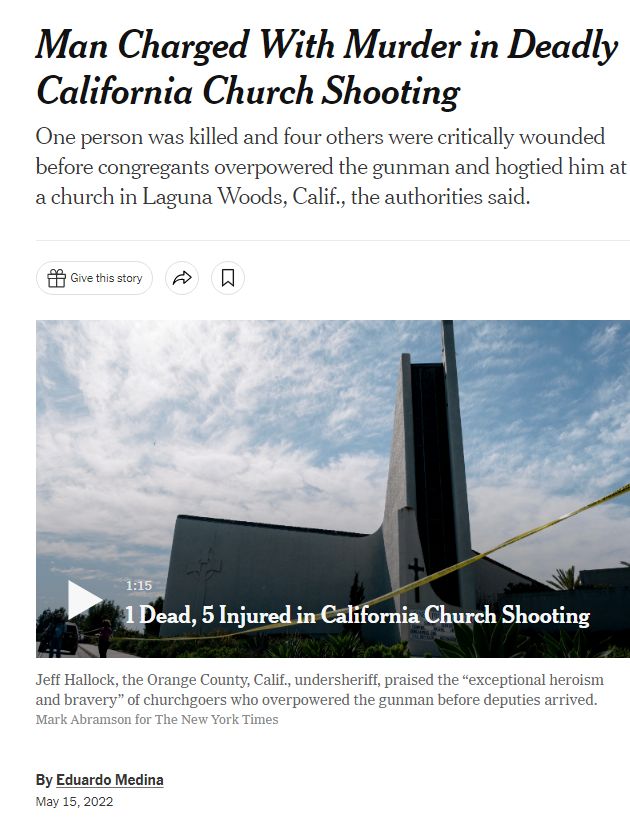 The victims were Taiwanese and the incident sadly occurred during Asian American and Pacific Islander Heritage month. It thus seems like the news media would be intensely driven to publicize the story.

Except there is a problem with the narrative: The suspect isn’t a ‘white supremacist.’ Nor is he one of the many African-American assailants who have been charged and convicted for attacking Asian-Americans.

The suspect is a Chinese-born man named David Wenwei Chou, a 68-year-old resident of Las Vegas. His motivation for the mass shooting was described in a hand-written note in Chinese left on a car dashboard, as was reported by the L.A. Times.

“David Wenwei Chou, 68, of Las Vegas, left notes in Chinese in his car stating he did not believe Taiwan should be independent from China, said Orange County Sheriff Don Barnes,” the Times reported. 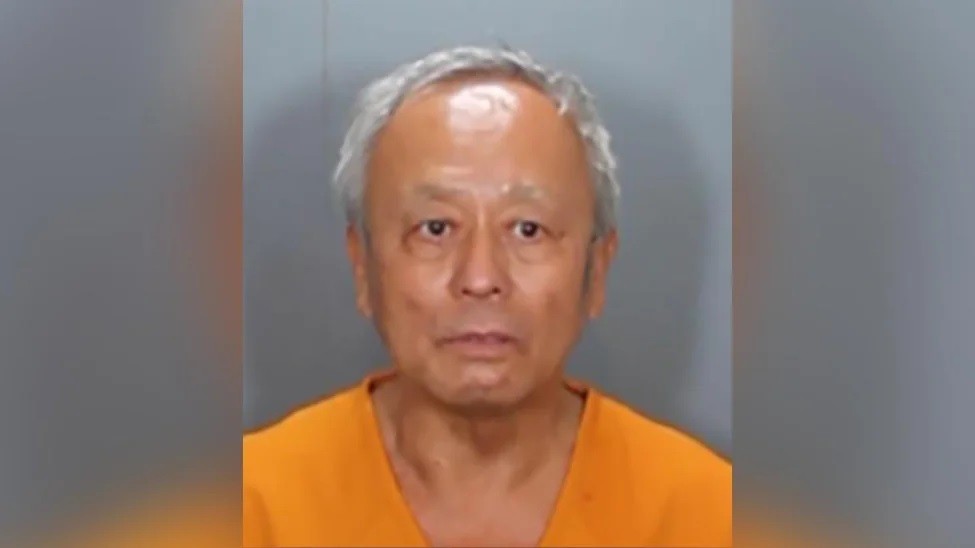 The L.A. Times’ commentary on the shooting is remarkable for its candor.

“China considers Taiwan a breakaway province and has grown increasingly aggressive about reclaiming the democratic, self-ruled island,” the Times noted. “Within Taiwan, feelings about the island’s relationship to China run so passionate that open debates are often avoided.”

The backstory for Chou’s apparent resentment of the Taiwanese is another matter. The Orange County Sheriff’s Department stated that Chou was born in mainland China and at some point relocated to Taiwan before immigrating to the United States. But an official from the Taipei Economic and Cultural Office told the L.A. Times that Chou was born in Taiwan, holds a Taiwanese passport, and did compulsory military service in Taiwan.

“The office is Taiwan’s de facto embassy, since the island is not officially recognized by the U.S. and most other countries,” the Times added.

There is at least a story of heroism in the church shooting that caused the mass shooting to be much less deadly than the Buffalo shooting: A brave man named Dr. John Cheng, the only victim thus far to have fatal injuries, tackled the man and subdued him before more were injured.

“Understanding that there was elderly everywhere and they couldn’t get out of the premises because the doors had been chained,” Orange County District Attorney Todd Spitzer said, “he took it upon himself to charge across the room and to do everything he could to disable the assailant.”

But the Laguna Woods church shooting is not the only mass casualty incident that the Biden administration has studiously avoided publicizing.

On Monday, new Press Secretary Karine Jean-Pierre was pressed on Biden’s strong interest in the Buffalo mass shooting, while he only had passing remarks on the Waukesha tragedy that left at least six people died and 61 others injured. Watch:

“How come the president is visiting Buffalo after a senseless tragedy there, but he couldn’t visit Waukesha after six were killed and 61 injured in an attack on a Christmas parade?” Fox News’ Peter Doocy asked.

“I mean, he’s visited many communities,” Jean-Pierre replied. “Buffalo, you know, he’s able to go tomorrow to Buffalo before the trip. That is something that was important for him to do. But he has visited many other communities. This is… Buffalo is not the first community, sadly, that he has had to go up to because of a violent attack.”

However, the evasive response did not answer the question about why Biden took such immediate interest in going to Buffalo, but passed on paying a visit to Waukesha, Wisconsin after the Christmas Parade attack. It may have something to do with the suspect Darrell Brooks being a vocal Black Lives Matter supporter.

One might add there is a similar lack of vocal outcry at the White House about the Laguna Woods church shooting, which raises dicey issues for an administration seemingly bent on placating China. Its subdued response is even quieter than that elicited by the New York City subway shooting in April, which the U.S. media suddenly dropped after it turned out the suspect was a black nationalist.

The White House’s early track record suggests that Biden’s motivation for going to Buffalo is purely about politics. In an election year, the Democrats do not appear motivated to soothe racial grievances, but are rather seeking to rub raw the wounds of racial resentments.