There’s Talk Going Around D.C. Kamala Harris May Soon Find Herself on Way Out of Biden’s White House

Kamala Harris and Joe Biden may be heading towards a bad breakup. The White House power couple have been locked in a bitter feud going back to the 2020 campaign. Now there are reports that there is behind-the-scenes maneuvering to ‘get Kamala out’ of the vice presidential role.

Fox News’ Chad Pergram, who I know would not repeat idle gossip and would only report Capitol Hill developments with strong corroboration, told Jesse Watters that there are “whispers” suggesting that there may be some new “high profile confirmation hearings” on the horizon in the House of Representatives.

Amidst the leak war between Harris’s team and Biden’s team, Chad Pergram pointed to the conjecture about the uncertain future of Kamala Harris, given such events at the botched introduction on the White House (as earlier reported at Becker News).

“Harris’ approval rating has plunged even further than Biden’s in recent months, with rumors swirling that the president is considering appointing her to the Supreme Court as a backdoor method of selecting a new VP,” the Daily Mail reported on Monday.

It should not be overlooked that Attorney General Merrick Garland is currently embattled in a controversy over targeting concerned parents as ‘domestic terrorists’ and potentially committing perjury in Congressional testimony over it. Harris, the former California Attorney General, might be presumed as a potential fit in the high profile position.

White House Press Secretary has tried to quell such rumors. On Monday, Psaki said that reports that Harris was “unhappy” and looking for a “cushy role” are unfounded.

‘There have been a lot of reports out there and they don’t reflect his view or our experience with the vice president,’ White House Press Secretary Jen Psaki said at Monday’s press briefing.

“The president relies on the vice president for her advice, for her counsel,” Psaki continued. “She’s somebody who’s not only taking on issues that are challenging, she’s not looking for a cushy role here – no vice president is, not president is.”

However, CNN said its lengthy piece come from “nearly three dozen former and current Harris aides, administration officials, Democratic operatives, donors and outside advisers — who spoke extensively to CNN — reveal a complex reality inside the White House.” The entire piece smacks of a leak from inside the Harris inner circle.

The bitter infighting between the two camps goes back even before the presidency. Beyond the infamous Democratic primary debate scene where Harris insinuated Biden was racist and Jill Biden reportedly told her backstage “go f*** yourself,” Biden’s allies tried to stop Harris from becoming VP to begin with.

“Some of Joe Biden’s allies are waging a campaign behind the scenes to stop Sen. Kamala Harris, D-Calif., from becoming his vice president,” CNBC reported in July 2020.

“This disgruntled group of at least a dozen Biden backers, including a few of his top donors, initiated the move against Harris close to a month ago, just weeks before a decision is expected, according to people with direct knowledge of the matter,” the report continued. “Many who spoke to CNBC declined to be named as these efforts have been made in private.”

The report cites Biden backers’ complaints about Harris that seem to be prescient in hindsight.

“Some remain bitter about her attacks on Biden during primary debates last year, saying they bring into question her loyalty to the former vice president,” the report added. “Others argue that she’s too ambitious and that she will be solely focused on becoming president herself.”

The CNN story, that again, appears to be leaked from the Harris camp, makes no secret about the VP’s presidential ambitions, and seems to even contain a thinly veiled threat.

Those signs of disloyalty continue to be percolating up repeatedly with Harris, even if she is ‘hugging it out’ with Joe Biden in public, just like she did earlier with Jill Biden after the “go f*** yourself” kerfuffle. 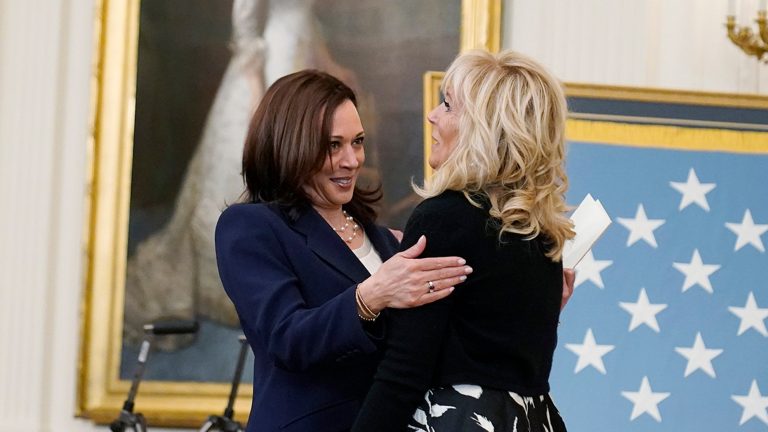 Kamala Harris, who was the most radical senator during her time as a Senator, is obviously playing hardball. But the more Harris plays these dangerous games with the Biden White House, the more people will see her as the conniving user that many claim she really is. It’s a Catch-22 for a Vice President who is somehow even more unpopular than a failed President.