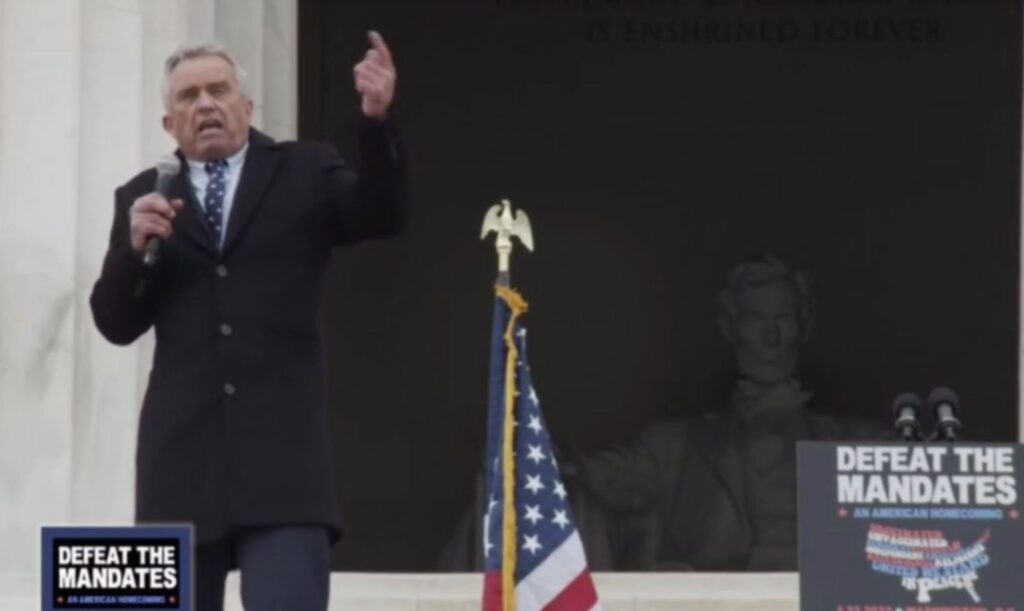 The “Defeat the Mandates” rally in Washington D.C. drew thousands of peaceful protesters in support of the common cause of opposing mask and vaccine mandates.

One of the most powerful speakers at the rally was Robert Kennedy Jr., founder and chairman of Children’s Health Defense. Kennedy Jr. is an attorney who has degrees from Harvard University and the London School of Economics, as well as a Juris Doctorate from the University of Virginia and an L.L.M. from Pace University.

His speech delivered to the rally attendees was focused on Big Pharma, which has escaped accountability and demands for transparency despite their core responsibilities during the Covid pandemic. His words were so provocative they

“You cannot sue any company,” he said. “Any of these large multinational corporations that claim to be involved in countermeasures. No matter how reckless their behavior, no matter how negligent their conduct. No matter how grievous your injury.”

“You cannot sue that company,” he reiterated. “They have a license…”

“These are criminal companies, by the way,” he proclaimed. “These are serial felons.”

“The four companies that make all four of our U.S. vaccines for the children’s program… have paid $35 billion in criminal penalties for hundreds of violations and damages in the last ten years,” he went on.

“These are the companies that gave us the opioid crisis,” he added. “That kills 56,000 children a year. More American kids every year than the Vietnam War killed in twenty years.”

“These are not good citizens,” he emphasized. “These are criminal enterprises.”

“And now you’re taking away any economic or legal incentive for them to behave?” he asked rhetorically. “What do you think they are going to do?”

“Do you think they’ve found Jesus, suddenly?” he went on. “And they’re going to take care of us and our children, they’re suddenly concerned with public health?”

“They took away due process rulemaking, they’ve taken away our right to be free of warrantless searches and seizures, this very intrusive track-and-trace surveillance, etcetera,” he went on.

“We are watching something now that I never believed that I would see in my lifetime,” RFK Jr. said. “I have read Orwell and Kafka and Aldous Huxley, this dystopian science fiction novels that someday the United States would be overtaken by fascism.”

“Fascism, incidentally, is defined… Mussolini defined it as the merger of state and corporate power,'” he added.

“And orchestrated by Tony Fauci,” he went on as the crowd booed loudly.

“What we’re seeing today is what I call ‘turnkey totalitarianism,'” he continued. “They are putting in place all of these technological mechanisms for control we’ve never seen before.”

“It’s been the ambition of every totalitarian state from the beginning of mankind to control every aspect of behavior, of conduct, of thought, and to obliterate dissent. None of them have been able to do it,” he added.

“They didn’t have the technological capacity,” he noted. “Even in Hitler’s Germany you could cross the Alps into Switzerland, you could hide in an attic like Anne Frank did. I visited in 1962 East Germany with my father. And met people who had climbed the wall and escaped. So, it was possible. Many died, surely. But it was possible.”

“Within five years, we are going to see 415,000 low orbit satellites,” he claimed. “Bill Gates and his 65,000 satellites alone will be able to look at every square inch of the planet 24 hours a day. They’re putting in 5G to harvest our data and control our behavior. Digital currency that will allow them to punish us from our distance and cut off our food supply. Vaccine passports.”

This part of the speech ignited a media firestorm. They pounced on RFK Jr.’s bit about satellite surveillance and issues with 5G, hardly fringe matters, to lambaste his speech and brandish him a “conspiracy theorist,” which essentially means it is beneath them to address his concerns.

Jake Tapper called him “an ignorant lying menace.” Adam Klasfield of Law Crime News weirdly commented, “The obscene Holocaust invocations and analogies, from RFK Jr. and others at this anti-vaccine rally, sound eerily similar to the rhetoric that appears in legal briefs for indicted Oath Keepers extremists.” Professor Peter Hotez, CNN’s resident vaccine fanatic, opined: “Since June 200,000 unvaccinated Americans lost their lives needlessly to COVID19, victims of antivaccine disinformation, aggression, dog whistles from extremists who compare vaccines to the Holocaust, or promote conspiracies about Bill Gates, Tony Fauci, Me, other US scientists.” Poor guy. It turns out the disinformation has been coming from his side all along.

The reflexive “conspiracy theorist” label was invoked, just as it has countless times in the past before the “theory” actually became the “reality,” such as with “vaccine passports” themselves… which are now being used all over the world to deny people work and access to public spaces.

Even if it is difficult to verify all of RFK Jr.’s claims, the epithet “conspiracy theorist” no longer has the power to unilaterally shut down conversation. It would be remiss not to point out there is no biggest perpetrator of “conspiracy theories” than the mainstream media, which lied for years about Russia collusion, just like it has lied the entire time about the Covid pandemic. We continue.

“You have a series of rights, as flawed as our government is, you can still go out and go to a bar, you can go to a sporting event, you can get on a bus or an airplane and you can travel, you have certain freedoms,” RFK Jr. went on. “You can get educated, etcetera.”

“The minute they hand you that vaccine passport, every right that you have is transformed into a privilege contingent upon your obedience to arbitrary government dictates,” he added.

“It will make you a slave!”

I highly recommend watching his entire speech, which can be found below. It is one of the most powerful takedowns of Big Pharma at a public event that you will find.

RFK Jr. has issued a rousing clarion call for all those who believe that the unlawful vaccine and mask mandates are simply “public health issues.” They are much more than that. They are about rights.

Nothing less than the future of Western civilization is on the line. There are dire implications if we fail to resist the authoritarian state’s escalating violations of human rights. No matter what its pretexts.