These are the 10 Worst Actions of the Biden Presidency, Ranked 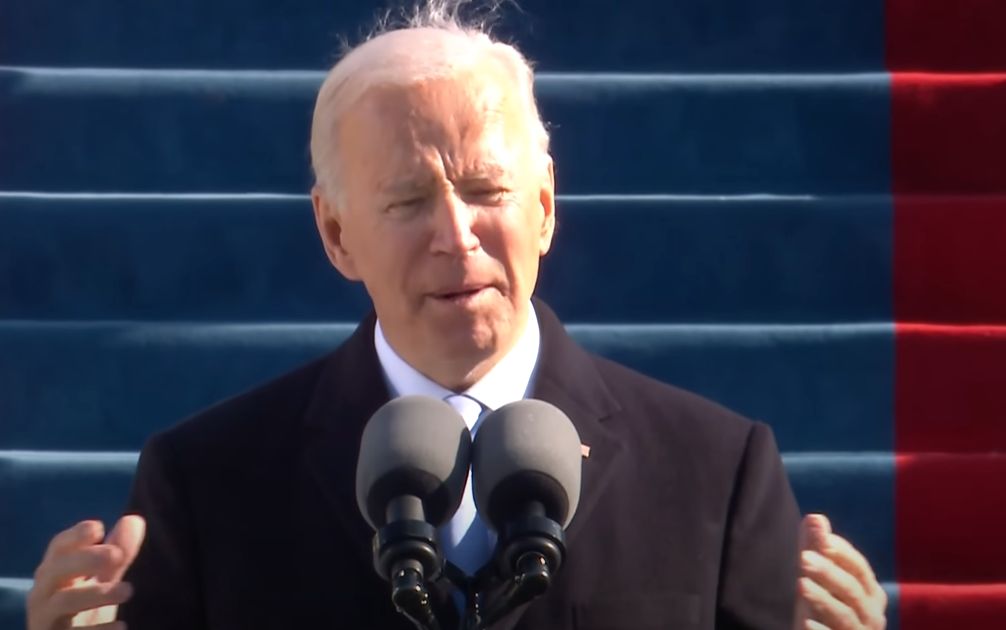 Americans haven’t gotten through a week of the Biden administration, but the new president appears to be on a mission to make the disastrous Obama administration look fantastic by comparison.

One thing we need to do is keep track of all the damage this new president is doing to the country. While Biden already has one of the worst early approval ratings of any modern president — extremely odd for a candidate who super-legitimately got 81 million votes! — he may be on a record pace to reach Jimmy Carter era lows within months.

Joe Biden has already burned through 30 executive orders and actions with more promised for this week. He may need to borrow Obama’s auto-pen to keep up at this clip. Here are Biden’s worst policies… so far.

Immigration and Customs Enforcement (ICE) agents, tasked with enforcing federal immigration law, are being instructed to free all detainees in their custody, as President Joe Biden’s administration halts deportations.

It is unclear if ICE is currently carrying out the mass release of all 14,195 detainees in its custody, 71.45 percent of whom are convicted criminals or have pending criminal charges. These detainees are currently held in approximately 138 facilities across the United States. (Breitbart News)

9. Ended Funding for The Wall

Biden’s presidential proclamation rescinded the national emergency declaration used by President Donald Trump to divert about $10 billion from Defense Department accounts toward the barrier, one of the costliest federal infrastructure projects in U.S. history. […]

“It shall be the policy of my Administration that no more American taxpayer dollars be diverted to construct a border wall,” Biden’s proclamation states. “I am also directing a careful review of all resources appropriated or redirected to construct a southern border wall.” (WaPo)

8. Violated His Own Federal Mask Mandate

President Biden, immediately upon entering office, made it a priority to issue the executive order, which orders federal workers and those in federal buildings or lands to always wear a mask. […] (Becker News)

Here is a subsequent photo of Biden without a mask and not socially distancing. 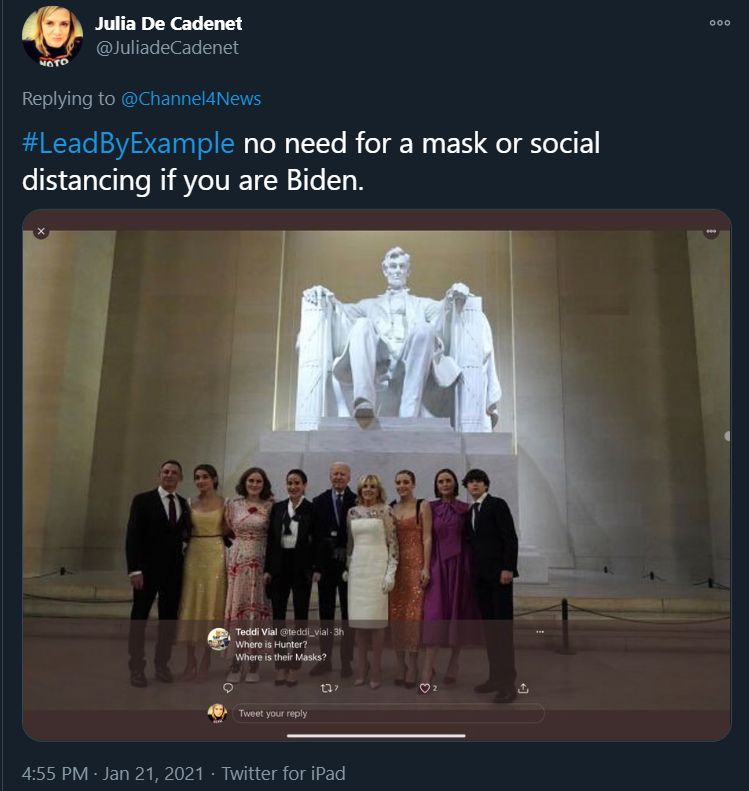 Among the flurry of executive orders signed on Wednesday, Biden called on all federal agencies to enforce a US supreme court decision from last year that expanded the definition of sex discrimination to include discrimination based on sexual orientation as well as gender identity – with language that explicitly referenced the arena of high school and college sports.

“Children should be able to learn without worrying about whether they will be denied access to the restroom, the locker room, or school sports,” the directive states, adding that the incoming administration is committed to “prevent and combat discrimination on the basis of gender identity or sexual orientation”. (The Guardian)

Despite the violent left-wing riots that have been going on since at least January 18th, the media have been burying their threat to America’s domestic tranquility.

The Biden administration, incidentally, has not lifted a finger about it, although it is reportedly compiling names of insurrectionists and vowing to fight “domestic terrorists.” Well, they’re right in front of the Biden administration’s face, and it appears they are doing nothing about it. (Becker News)

One of Biden’s initial actions was re-signing the Paris Climate Agreement, a non-binding accord that former President Trump pulled out of with much fanfare in June 2017. One of the Paris agreement’s most agressive goals is zero global net greenhouse gas emissions by 2050.

The prior administration estimated adherence to the agreement would cost the United States $3 trillion in lost GDP and 6.5 million jobs. The Heritage Foundation assessed that the accord would cost $20,000 per family. (Becker News)

The Biden administration announced Thursday a 60-day suspension of new oil and gas leasing and drilling permits for U.S. lands and waters as officials moved quickly to reverse Trump administration policies on energy and the environment. […]

The order did not ban new drilling outright. It includes an exception giving a small number of senior Interior officials — the secretary, deputy secretary, solicitor and several assistant secretaries — authority to approve actions that otherwise would be suspended.

The order also applies to coal leases and permits, and blocks the approval of new mining plans. Land sales or exchanges and the hiring of senior-level staff at the agency also were suspended. (Marketwatch)

Biden had claimed during the campaign that he had no intention to ban fracking. “No more, no new fracking,” he had actually said, which proved to be an accurate reflection of his intentions.

4. Required Non-Citizens to Be Counted in Census

Critically, the Biden administration has also issued guidance for the decennial census to count “persons in each State,” clearly including anyone who resides in the state, whether legally or illegally. The U.S. census is the basis for House representational apportionment. The prior Trump administration had sought to exclude illegal immigrants from being counted. (Becker News)

The HHS Thursday froze the former Trump administration’s December drug policy that requires community health centers to pass on all their insulin and epinephrine discount savings to patients. […]

This freeze is part of the Biden administration’s large-scale effort announced this week that will scrutinize the Trump administration’s health policies. If the previous administration’s policies raise “fact, law, or policy” concerns, the Biden HHS will delay them and consult with the Office of Management and Budget about other actions. (Bloomberg Law)

Thus does the future cabinet member reflect the Biden/Harris administration’s indifferent attitude towards the domestic oil and gas industry in general and this key, $8 billion energy infrastructure project specifically. News of the cancellation of this cross-border permit was by and large treated as sort of a business-as-usual matter, but it is in fact an extraordinary, even radical act of executive fiat that has few peacetime precedents in American history. […]

President Biden’s rash decision also puts thousands of union jobs at risk, representing $2.2 billion in lost wages. Keystone XL already employs about 2,000 workers, including members of the International Brotherhood of Electrical Workers, the United Association of Journeymen and Apprentices, the Teamsters and other major unions. All told, the plan for full construction of Keystone XL would employ as many as 10,000 union workers through its completion. (Forbes)

1. Complete Lack of Leadership in Time of Immense National Challenge

Gloomy and dark messaging on the coronavirus pandemic that shows he has no real plan:

Today, he delivered a statement about the coronavirus pandemic that was cold and dark and gray. He stated “there is nothing we can do to change the trajectory of the pandemic in the next several months.” (Becker News)

Defeatist attitude about the economy, while killing thousands of jobs:

The Biden administration shutting down construction of the Keystone XL pipeline, which some scientists argue contributes to climate change, could end thousands of American construction jobs. (Fox Business)

U.S. President-elect Joe Biden said he had believed for a long time that President Donald Trump was not fit for office, but it was up to Congress to decide on a second impeachment of the Republican president after Wednesday’s storming of the Capitol. […]

“What the Congress decides to do is for them to decide, but… we’re going to have to be ready to hit the ground running,” he said, when asked about legislation being readied by House Democrats to impeach Trump for his role in fomenting the violence. (Reuters)

Despite being the nominal leader of the Democratic Party, President Biden is abdicating leadership on one of the most pivotal post-election decisions: Should the Democrats pursue an unprecedented vendetta against a prior president, who is now a private citizen? You would think the new elected president would have an opinion on the matter.

A new poll shows that only 1 in 5 Americans have confidence that Biden can “unify” the country after the Trump years. Furthermore, it appears he has no real coronavirus plan. Or economic plan. So why was he elected?

Biden’s silence on the Trump impeachment matter shows that his words about “unity” were nothing but lip service and he is going to be a weak leader at a time of immense national challenge.