‘This is Brazen Government Censorship: ‘White House Directly Asked that Tucker Carlson and Tomi Lahren Be Silenced Over Covid Vaccines

The White House directly lobbied for the censorship of Fox News hosts Tucker Carlson and Tomi Lahren. The proof comes from an email from White House Digital Director Rob Flaherty to a Facebook employee.

They respond “running this down now.”

This is completely insane and a total violation of the first amendment. pic.twitter.com/lOpyt5zGEw

“Here is an email from White House Digital Director  @RFlaherty46 telling Facebook to censor @TuckerCarlson and @TomiLahren,” Greg Price reported on Twitter. “They respond ‘running this down now’,”

“This is completely insane and a total violation of the first amendment,” Price commented. 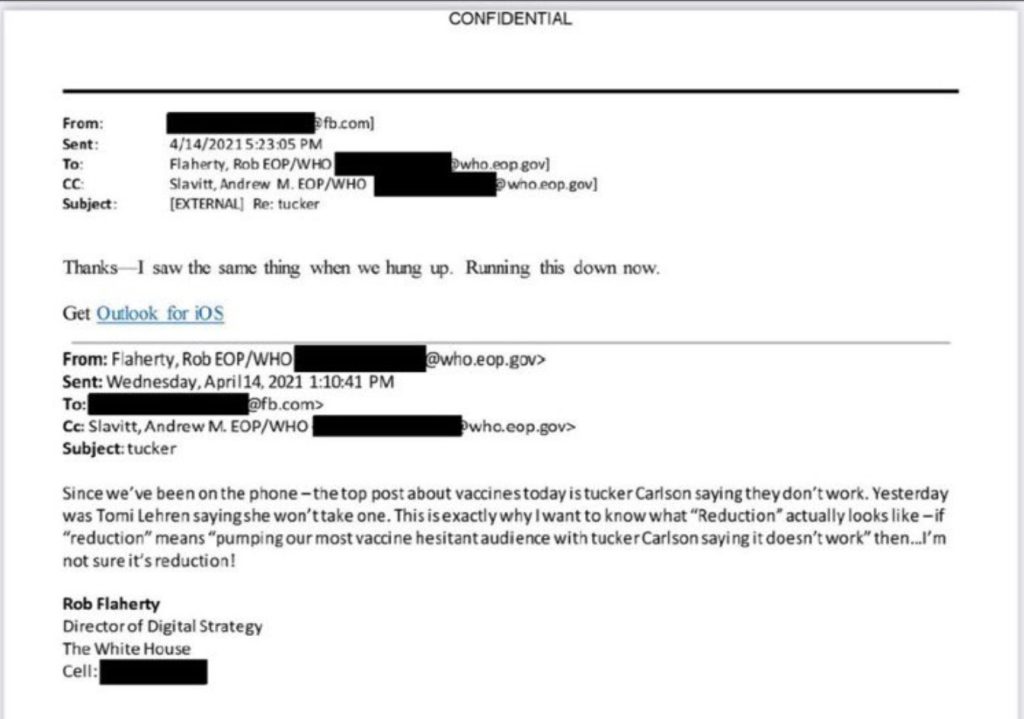 Sen. Ted Cruz reacted to the report with a tweet of his own.

This is brazen government censorship.

If there are any actual “journalists” remaining in the corrupt corporate media, they should vocally condemn the Biden White House getting their lap dogs in Big Tech to silence major media outlets. https://t.co/N3OcwpkHNM

“This is brazen government censorship,” Cruz remarked. “If there are any actual ‘journalists’ remaining in the corrupt corporate media, they should vocally condemn the Biden White House getting their lap dogs in Big Tech to silence major media outlets.”

Unfortunately, the corporate media can no longer be trusted to defend Americans’ fundamental rights, including freedom of speech and freedom of the press. They are subservient to the corrupt Democratic Party, which for decades has openly and brazenly attacked everything that the nation has stood for.

The lack of accountability for the Democratic Party has become the greatest threat to liberty this nation has ever faced. Former White House Press Secretary Jen Psaki during her time in office openly threatened private citizens over their Covid views. In February 2022, Psaki applauded “Spotifly” [sic] for its decision to label Joe Rogan podcasts for allegedly violating the White House’s official Covid positions.

Far from defending Joe Rogan’s right to criticize Big Pharma and U.S. government policy on the Covid response, a reporter set up Jen Psaki with a softball question that seemed to beg her for more censorship.

“Spotify is putting out advisory warnings on episodes that have to do with Covid-19,” a reporter asked Psaki. “Does the White House and the administration think this is a satisfactory step, or do you think that companies like Spotify should go further than, you know, just a label on their say, hey go to your own — you know check this out. You know, there is more research you can look at, you know science research.”

“So our hope is that all major tech platforms and all major news sources for that matter be responsible and be vigilant to ensure the American people have access to accurate information on something as significant as Covid-19,” she remarked in her answer. “That certainly includes Spotify. So this disclaimer, it’s a positive step, but we want every platform to continue doing more to call out a misinformation while also uplifting accurate information.”

But the 5th U.S. Circuit Court of Appeals this week blocked Republican attorneys’ general push to have Psaki testify, thus escaping further scrutiny of her unconstitutional push to silence critics.

Thomas Jefferson once wrote, “Our liberty depends on the freedom of the press, and that cannot be limited without being lost.”

The Democratic Party is now openly hostile to the freedom of the press. So-called “journalists” in the corporate media now appear to be perfectly fine with such an unconstitutional violation.