Time Announces Its ‘Person of the Year’ is Volodymyr Zelensky

“Time” magazine has announced its 2022 Person of the Year: Ukrainian President Volodymyr Zelensky.

“Time” skipped over the unseemly aspects of Zelensky’s regime — such as suspending 11 opposition parties, nationalizing the media, and attacking the Ukrainian Orthodox Church — to weave a glowing panegyric of his supposed heroism during the war effort against Putin’s Russia.

The call from the President’s office came on a Saturday evening: Be ready to go the next day, an aide said, and pack a toothbrush. There were no details about the destination or how we would get there, but it wasn’t difficult to guess. Only two days earlier, on the 260th day of the invasion of Ukraine, the Russians had retreated from the city of Kherson. It was the only regional capital they had managed to seize since the start of the all-out war in February, and the Kremlin had promised it would forever be a part of Russia. Now Kherson was free, and Volodymyr Zelensky wanted to get there as soon as possible.

“My security was 100% against it,” the President told reporter Simon Schuster. “They took it hard. They can’t control practically anything in a region that has just been de-occupied. So it’s a big risk, and, on my part, a bit reckless.”

But it’s not the only “reckless” act committed by Zelensky during his tenure as a wartime president: Its tolerance of the neo-Nazi linked ultranationalist Azov batallion, his calls for NATO intervention after a fake news report the Russians had fired a missile into Poland (it was a Ukrainian anti-defense missile) and his persistent efforts to provoke World War III by urging a pre-emptive nuclear strike on Russia.

“Mr President, in your remarks you mentioned nuclear blackmail,” the host at the Lowy Institute asked him. “Mr Putin told us the other day that he’s not bluffing. So may I ask you, do you believe that the likelihood of the use of Russian nuclear weapons against Ukraine has risen, and what more do you want NATO to do to deter Russia from using nuclear weapons?”

“But what is important, I once again appeal to the international community, as I did before February 24 – we need pre-emptive strikes, so that they’ll know what will happen to them if they use nukes, and not the other way around,” he said.

“Don’t wait for Russia’s nuclear strikes, and then say, ‘Oh, since you did this, take that from us!’ Reconsider the way you apply pressure. This is what NATO should do – reconsider the order in which it applies pressure [on Russia].” 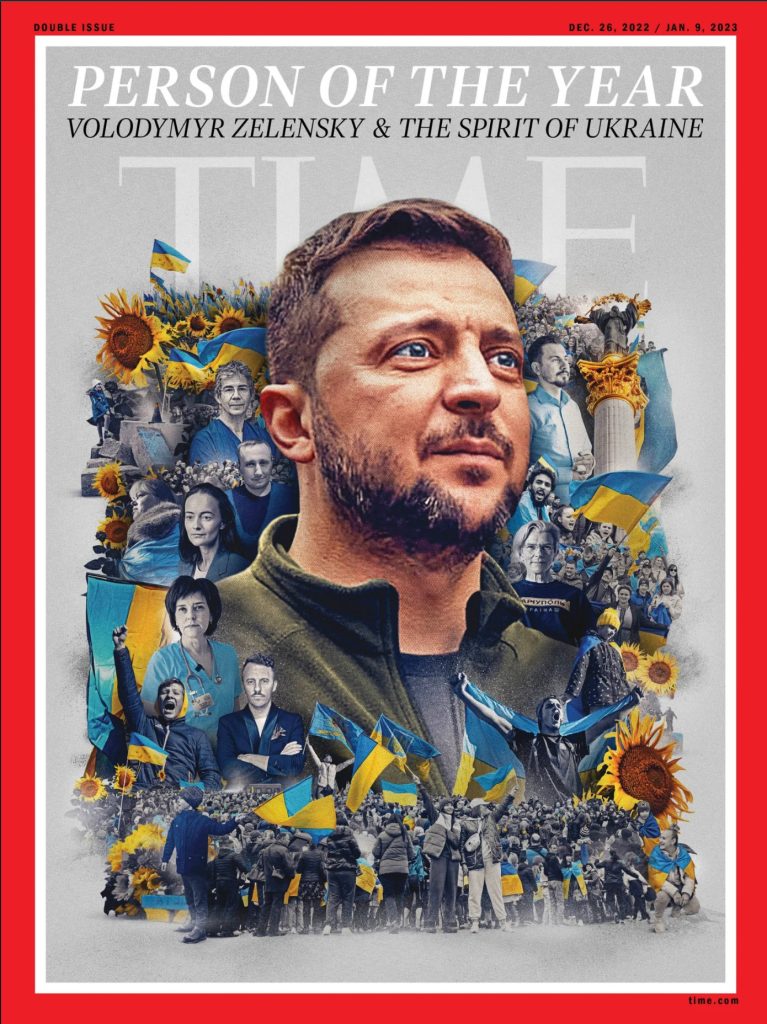 The “Time” article notes that Zelensky cuts an unlikely figure to be a ‘war hero.’

There wasn’t much in Zelensky’s biography to predict his willingness to stand and fight. He had never served in the military or shown much interest in its affairs. He had only been President since April 2019. His professional instincts derived from a lifetime as an actor on the stage, a specialist in improv comedy, and a producer in the movie business.

The glowing piece, pivoting from journalism to war propaganda, attempts to frame Zelensky’s fight as analogous to World War II.

Now it was his generation’s turn to face the blows of a foreign invader. Instead of Stalin and Hitler, it was Putin trying to break their will by depriving them of heat and light, destroying their ability to harvest food, or to think about much besides survival through this winter. Already the next generation of Ukrainians, like Zelensky’s own son, were learning about the tools of war instead of planning for prosperity. That is the pattern the President aims to disrupt, and his plan relies on more than weapons.

Zelensky then makes an appeal to the West to pull Ukraine towards the “free world.”

“I don’t want to weigh who has more tanks and armies,” he says. Russia is a nuclear superpower. No matter how many times its forces are made to retreat from Ukrainian cities, they can regroup and try again. “We are dealing with a powerful state that is pathologically unwilling to let Ukraine go,” Zelensky told me. “They see the democracy and freedom of Ukraine as a question of their own survival.” The only way to defeat an enemy like that—not just to win a temporary truce, but to win the war— is to persuade the rest of the free world to pull Ukraine in the other direction, toward sovereignty, independence, and peace. The loss of freedom in one nation, he argues, erodes freedom in all the rest. “If they devour us, the sun in your sky will get dimmer.”

Sadly, that “free world” is disappearing more and more by the day, due in part to the West’s efforts to abandon free speech and political accountability. Part of the West’s authoritarianism has been the effort to circumscribe criticism of Zelensky and Ukraine during the war effort.

Despite Zelensky’s nuclear brinksmanship during a military “stalemate” with Russia, threatening to plunge Europe into a regional war, he has gotten superstar media treatment in the West. The Ukrainian president recently was given a showcase at a New York Times speaking event alongside disgraced crypto king Sam Bankman-Fried, whose now-collapsed FTX platform helped bankroll the Ukrainian war efforts.

The Ukrainian president, a darling of the World Economic Forum and an acolyte of Canadian premier Justin Trudeau, has been the beneficiary of U.S. aid totaling at least $68 billion. While Ukraine’s plight against Russia is a sympathetic one, the president’s handling of the war has been questionable one.

Americans are justified questioning the U.S.’s involvement in a proxy war with a corrupt, undemocratic nation led by an unstable leader who has repeatedly threatened to trigger nuclear war with Russia.

Zelensky may be a notable person, but he is undeserving of the acolades of a “Time” Person of the Year profile that omits inconvenient facts. Unfortunately, it continues a track record at “Time” of abusing its one-time honor to prop up individuals unworthy of public support.