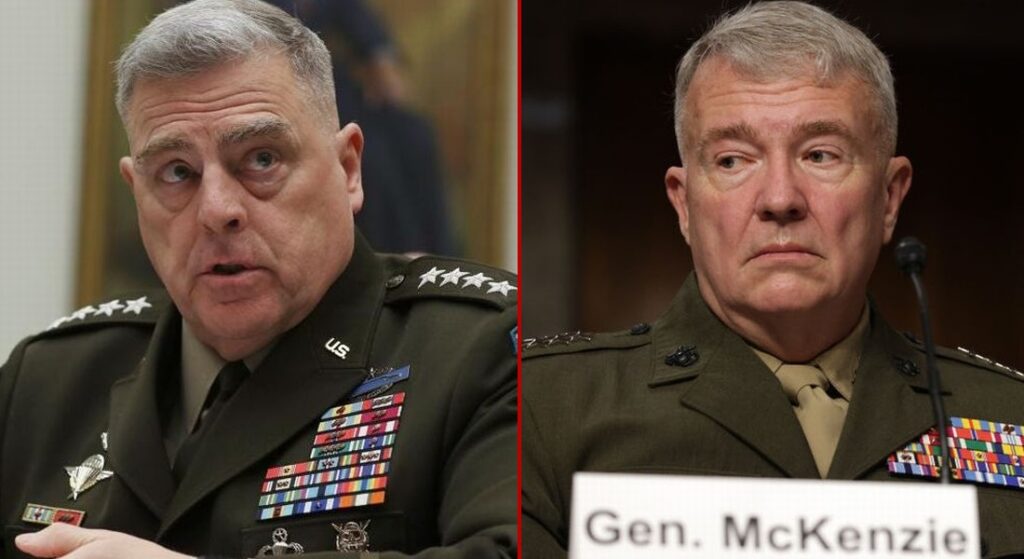 Two of the U.S. military’s highest-ranking generals blamed Biden for the Afghanistan withdrawal debacle, even as troops face jail-time for criticizing the Commander-in-Chief. On Tuesday, General Mark Milley, beleagured Chairman of the Joint Chiefs of Staff, and General Kenneth McKenzie, CENTCOM commander, appeared on Capitol Hill and pointed their fingers at President Biden for the calamitous withdrawal.

“Top military leaders said Tuesday that they had recommended to President Joe Biden that the U.S. keep 2,500 troops in Afghanistan even after the Aug. 31 withdrawal deadline, contradicting the president’s assertion last month that his advisers did not tell him to leave a small military presence in the country,” NBC reported.

“Gen. Frank McKenzie, who oversaw the withdrawal as head of U.S. Central Command, and Gen. Mark Milley, the chairman of the Joint Chiefs of Staff, said in testimony before Congress that they had communicated that advice to the president,” NBC noted.

“Biden, however, was asked in an interview with ABC News in mid-August whether any of his military advisers told him to leave 2,500 troops in the country,” the report noted.

The generals insisted in Congressional testimony that President Biden ignored their advice to maintain a small military presence to oversee the evacuation of American citizens and military equipment. There at least one hundred Americans still awaiting departure from Afghanistan, and as many as an estimated 4,000. Billions of dollars of valuable military equipment was left behind and fell into the hands of the Taliban and America’s enemies due to Biden’s reckless withdrawal.

“Gen. McKenzie acknowledges reporting that he initially recommended to POTUS that he maintain 2,500 troops in Afghanistan. His advise (sic) was that withdrawal would lead inevitably to collapse of Afghan forces and ultimately the Afghan government,” Politico’s Lara Seligman reported.

“I recommended we keep 2,500 troops in Afghanistan,” Gen. McKenzie said in his testimony.

U.S. lawmakers are demanding that the Pentagon open an Article 15-6 investigation into the actions of Chairman of the Joint Chiefs of Staff General Mark Milley for reported conduct suggesting that he committed high treason.

The Department of Defense was notified of the lawmakers’ demands for an investigation into General Milley’s activities both prior to the November election and after the January 6 riot. Milley essentially confirmed in a statement that he twice contacted Chinese General Li Zuocheng, which follows reporting from Bob Woodward and Bob Costa in their forthcoming book “Peril.”

The book relates that Milley promised the Chinese general that he would give the CCP a ‘heads up’ if the United States intended to attack under then Commander-in-Chief Donald Trump. The second call Milley made to General Li on January 8th was unauthorized, according to former Secretary of Defense Christopher Miller.

General Milley on Tuesday defended his calls to Communist China at the end of Donald Trump’s presidency.

“I know, I am certain, that President Trump did not intend to attack the Chinese. … And it was my directed responsibility by the secretary to convey that intent to the Chinese,” Milley told the Senate Armed Services Committee. “My task at that time was to de-escalate. My message again was consistent: Stay calm, steady, and de-escalate. We are not going to attack you.”

Milley also claims his Oct. 30 and Jan. 8 calls were “fully coordinated with the defense secretaries at the time as well as other U.S. national security agencies,” the AP reported.

Milley nonetheless took heat from Senator Dan Sullivan over there being “zero accountability” for the military “fiasco.”

"Fiasco… there has been zero accountability."pic.twitter.com/Cqwxutpc13

Milley, himself, confirmed that “there’s no way” he is going to resign, adding that “those kids at Abbey Gate” never had the option of resigning. This further confirms an earlier reported Becker News scoop that General Milley had told staff at the Pentagon that “he will not be fired nor will he quit.”

President Biden has given the general his full backing, despite the Chairman of the Joint Chiefs of Staff effectively ‘throwing him under the bus’ on Afghanistan on Capitol Hill on Tuesday. It will be interesting to see if that situation changes.

The military’s top brass effectively criticizing the Commander-in-Chief on Afghanistan comes as the military troops are being warned to not criticize President Joe Biden or they will face disciplinary action under the Uniform Code of Military Justice.

Former Marine commander Lt. Col. Stu Scheller, who went viral in a social media video pressing the top brass for answers on Afghanistan, is now “currently in pre-trial confinement,” a spokesperson for Training and Education Command said of the officer’s status on Monday.

“The time, date, and location of the proceedings have not been determined. Lt. Col. Scheller will be afforded all due process,” the statement said.

The U.S. military is thus beginning to mirror the rest of the federal government: Disproportionate penalties for the rank and file, but zero accountability for the ‘leadership’ at the top.

Scientist Warns People Not to Get Company’s Vaccine in Undercover Video, Reveals Plan to Force People to Take It