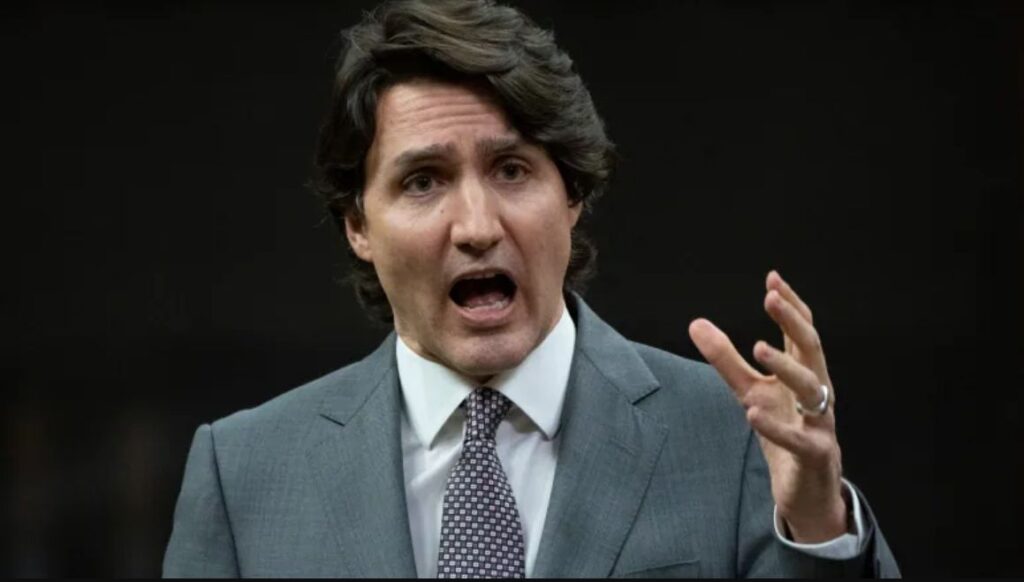 “I’m from independent media,” a journalist said. “So I was in the crowd yesterday. I was unfortunately hit with some pepper spray. I just have a question. There’s some video cameras that the police are using and some news outlets that reporting that you’re gathering intelligence with those cameras.”

“Can you elaborate, like if the protesters at this point, you know, retreat and go home, are they going to be getting sort of repercussions down the road?” he asked. “Are you going to be sort of actively pursuing the people that you’ve been sort of documenting and filming who are still out there protesting? What are your plans after this? After the protest is over?”

“It’s a great question,” the chief replied. “And the simple answer is yes. If you are involved in this protest, we will actively look to identify you and follow up with financial sanctions and criminal charges.”

Justin Trudeau on Monday invoked the Emergencies Act to suspend civil rights and impose a state of martial law due to the Freedom Convoy protests. The Canadian Prime Minister made the announcement on Monday.

“We cannot and will not allow illegal and dangerous activities to continue,” Trudeau said in the speech, claiming, “serious challenges to law enforcement’s ability to effectively enforce the law.”

The AP attempted to frame the police chief’s resignation as coming from ‘criticism.’ It was due, however, to the chief’s disagreement with Trudeau’s mishandling of the Freedom Convoy protest.

“In response to calls to divert municipal funding from the police to social services, Sloly had previously acknowledged the need for ‘systemic change’ in policing,” the report added.

“Canadian Public Safety Minister Marco Mendicino said it is time for police to begin using their broad authority conferred under Canada’s Emergencies Act, which allows the government to ban the blockades and begin towing away trucks,” the AP reported.

“We need law enforcement to take the reins, to utilize the Emergencies Act and to enforce,” Mendecino said after Trudeau’s announcement. “We have given new powers to police and we need them to do the job now.”

The Canadian Civil Liberties Association condemned the authoritarian crackdown against the protesters.

“The federal government has not met the threshold necessary to invoke the Emergencies Act,” the CCLA said on Twitter. “This law creates a high and clear standard for good reason: the Act allows government to bypass ordinary democratic processes. This standard has not been met.”

“The Emergencies Act can only be invoked when a situation ‘seriously threatens the ability of the Government of Canada to preserve the sovereignty, security and territorial integrity of Canada’ & when the situation ‘cannot be effectively dealt with under any other law of Canada’,” the CCLA went on.

“Governments regularly deal with difficult situations, and do so using powers granted to them by democratically elected representatives,” the CCLA added. “Emergency legislation should not be normalized. It threatens our democracy and our civil liberties.”

Over 100 people were arrested Friday and Saturday during the police crackdown on the Freedom Convoy protest. Unidentifiable officers in riot gear violently attacked the peaceful protesters, deployed tear gas, and an officer even trampled a disabled woman while on horseback.