Trump Fires Back Warning to RINOs in New Statement; Escalates War with RNC Over Fundraising & Endorsements

Donald Trump slammed the Republicans in Name Only who have been fundraising off of his name in a statement issued on Monday. 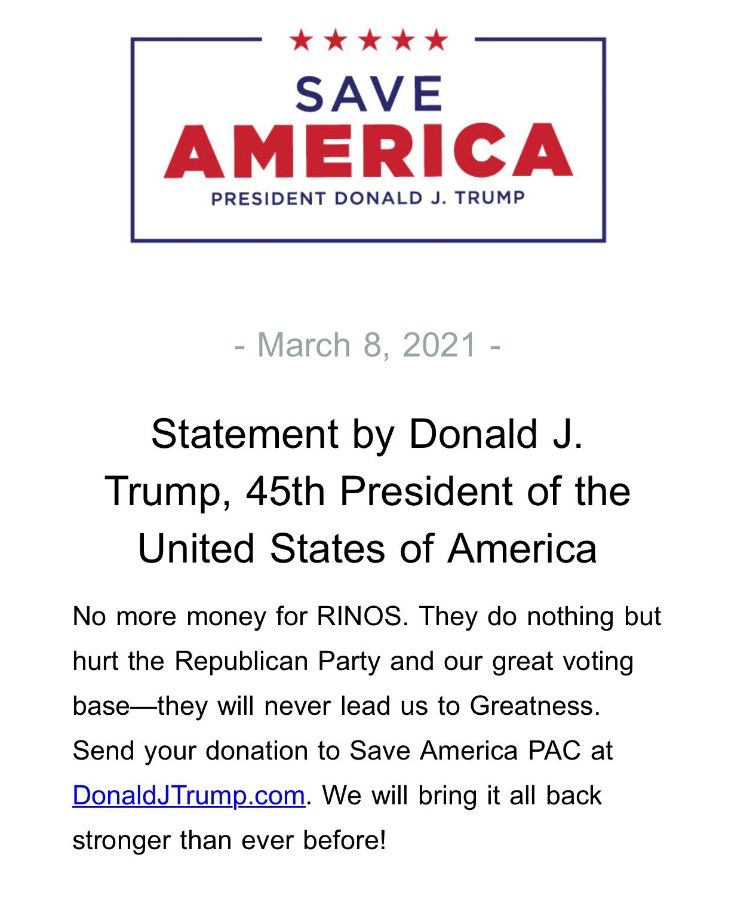 “No more money for RINOS,” Trump said  “They do nothing but hurt the Republican Party and our great voting base—they will never lead us to Greatness.”

“Send your donation to Save America PAC at DonaldJTrump.com,” Trump’s statemement continued. “We will bring it all back stronger than ever before!”

The message follows in the wake of a cease-and-desist letter that Trump’s legal team sent to the RNC, NRCC and NRSC. The former president’s lawyers sent the letters to the organizations on Friday.

On Tuesday, the RNC fired back that it has the right to use Donald Trump’s name and likeness without his permission for its fundraising efforts.

“The letter from RNC chief counsel Justin Riemer says the GOP ‘has every right to refer to public figures as it engages in core, First Amendment-protected political speech, and it will continue to do so in pursuit of these common goals’,” the Hill reported.

The letter was sent to Alex Cannon, the counsel for Trump’s Save America PAC, according to the Hill’s report. It is the latest in a brewing range war between Donald Trump and the RNC regarding the former president’s endorsement of his own chosen candidates.

“On Friday, the RNC sent out two emails asking supporters to donate as a way to add their name to a ‘thank you’ card for Trump,” Politico reported. “President Trump will ALWAYS stand up for the American People, and I just thought of the perfect way for you to show that you support him!” the email states. “As one of President Trump’s MOST LOYAL supporters, I think that YOU, deserve the great honor of adding your name to the Official Trump ‘Thank You’ Card.”

This obviously did not go over with Trump. His latest statement sends the message that he intends to not only compete with the RNC over backing political candidates, but also for campaign fundraising.