Former President Donald Trump is issuing a warning about the real possibility that current President Joe Biden may provoke ‘World War 3′ with his reckless warmongering.

Donald Trump, one of the most peaceful American presidents in modern times, shared a video of Joe Biden signaling that he was willing to go to extreme lengths to stop the Russians’ Nord Stream 2 pipeline, should it invade Ukraine. Watch:

“Wow, what a statement. World War III anyone?” Trump remarked on Truth Social.

Donald Trump also offered his services as a diplomatic broker to put an end to the destructive Russia-Ukraine War, which has developed into a stalemate in recent months.

“This is a big event that should not entail a big solution, at least not yet. The Russia/Ukraine catastrophe should NEVER have happened, and would definitely not have happened if I were President,” Trump wrote on Truth Social. 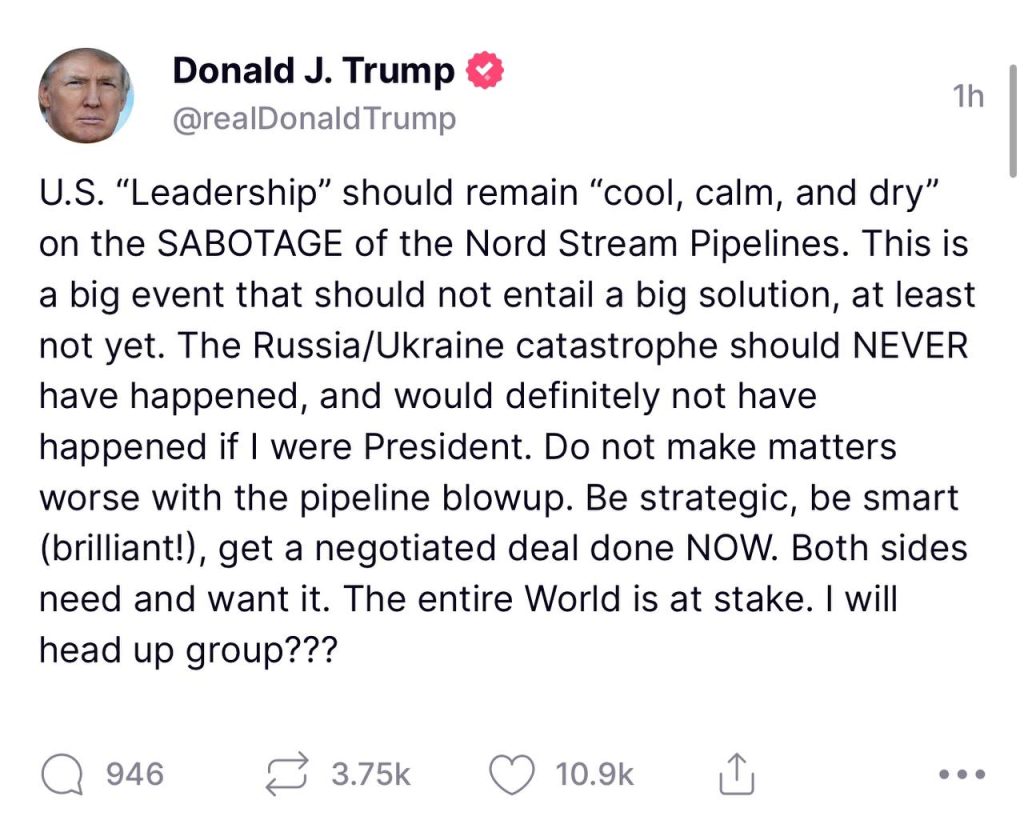 “Do not make matters worse with the pipeline blowup. Be strategic, be smart (brilliant!), get a negotiated deal done NOW,” he added. “Both sides need and want it. The entire World is at stake. I will head up group???”

Trump had earlier in the evening reminded the world that he had warned Germany about overreliance on Russian energy.

“Everyone is talking about the big hurricane barreling into Florida, as they should be, but perhaps a far more important event in the longer term was the announcement that the Nord Stream I & II Pipelines out of Russia (which I brought to the World’s attention as President when I explained how crippling reliance on it could be for Germany and other parts of Europe,” wrote Trump.

“Everybody laughed at the time, but they are not laughing anymore!) has been SABOTAGED. This could lead to major escalation, or War!”

In a speech at the United Nations in 2018, Trump’s warning about reliance on Russian energy drew chuckles from the German delegation.

“Reliance on a single foreign supplier can leave a nation vulnerable to extortion and intimidation,” Trump warned.

Are you still laughing, Germany?

We tried to warn you. #NordStream2 pic.twitter.com/kawsJZ2nMk

“That is why we congratulate European states, such as Poland, for leading the construction of a Baltic pipeline so that nations are not dependent on Russia to meet their energy needs. Germany will become totally dependent on Russian energy if it does not immediately change course,” Trump said. “Here in the Western Hemisphere, we are committed to maintaining our independence from the encroachment of expansionist foreign powers.”

The Nordstream 2 natural gas pipeline from Russia to Germany suffered catastrophic damage in a series of explosions on Monday. According to Danish authorities, the explosions were the result of “deliberate actions.” European Union Commission President Ursula Von der Leyen said the leaks were due to “sabotage.”

Earlier in 2022, President Biden himself had issued a thinly veiled threat to the Russians about the pipeline.

In February, President Biden warned: “If Russia invades…then there will be no longer a Nord Stream 2. We will bring an end to it.”

Accusations that Russian President Vladimir Putin blew up the Nordstream 2 pipeline, which carries natural gas supplied by state-controlled gas giant Gazprom, rely in part on U.S.-sourced reports that Russian warships were in the vicinity prior to the explosions. The U.S.-based sources also note that Russian submarines were in the area the previous week.

However, there are a number of major flaws with the presumption that Putin must have ordered the pipeline destroyed. Firstly, Putin controls the gas fed into Nordstream 2, thus, he only needs to order the gas to be shut off, as he has done on previous occasions. Secondly, the Russian government relies heavily on natural gas, which constitutes 45% of the state budget, according to the International Energy Agency.

On Friday, Putin blamed “Angl0 Saxons” for the act of sabotage to the Nord Stream pipelines.

“Sanctions are not enough for the West, they have switched to sabotage… by organising explosions on the Nord Stream international gas pipelines that run along the bottom of the Baltic Sea,” Putin said during a televised speech at the Kremlin, which recently annexed four Russian-occupied regions of Ukraine.

The massive pipeline explosions occurred near the Danish island of Bornholm, which is located in international waters. The methane gas that is pouring out from is now the basis of an environmental catastrophe. A worst case scenario of 778 million cubic meters of methane gas would comprise a record amount of the gas released into the atmosphere from any manmade source during a single event.